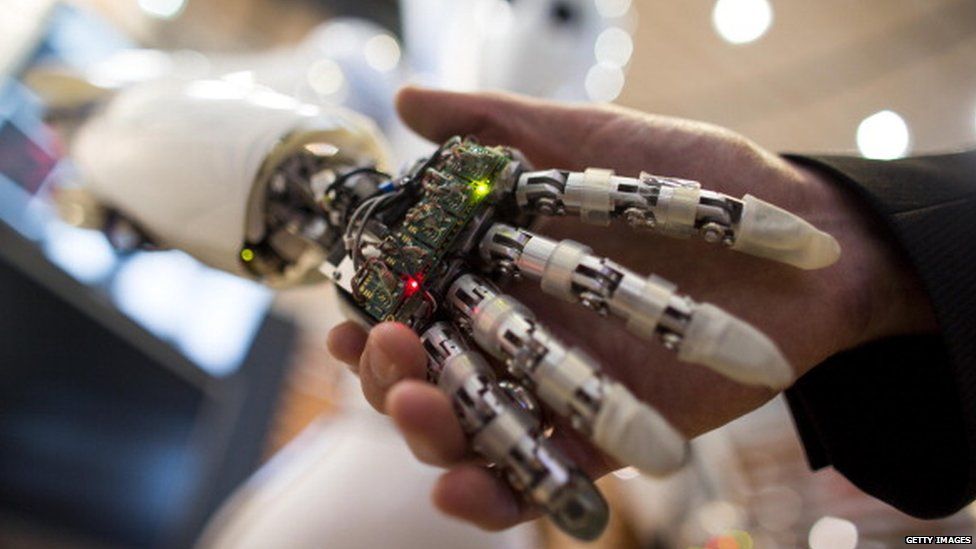 Often the words used to discuss it are miles away from the ones we use every day. It can feel like an exclusive club.

This AI alphabet will bring you closer to understanding the language used to talk about machine intelligence.

A is for Artificial Intelligence. It's the science of how to make machines that can think for themselves according to Stanford University in the US.

What AI means is debated because no one agrees on what intelligence actually is. Some think it is the way humans think (see G is for General AI), others think of it as something displayed in many specific tasks (see N is for Narrow AI).

B is for Big Data. We have a lot more stored facts and statistics these days, thanks to social media, online companies and well, the internet itself. There's such a huge amount we don't know what to do with it. It can be incredibly valuable and incredibly dangerous. AI can help us sift through this data and turn it into information we can use. It can pick up patterns and provide predictions. It can also help secure our data. 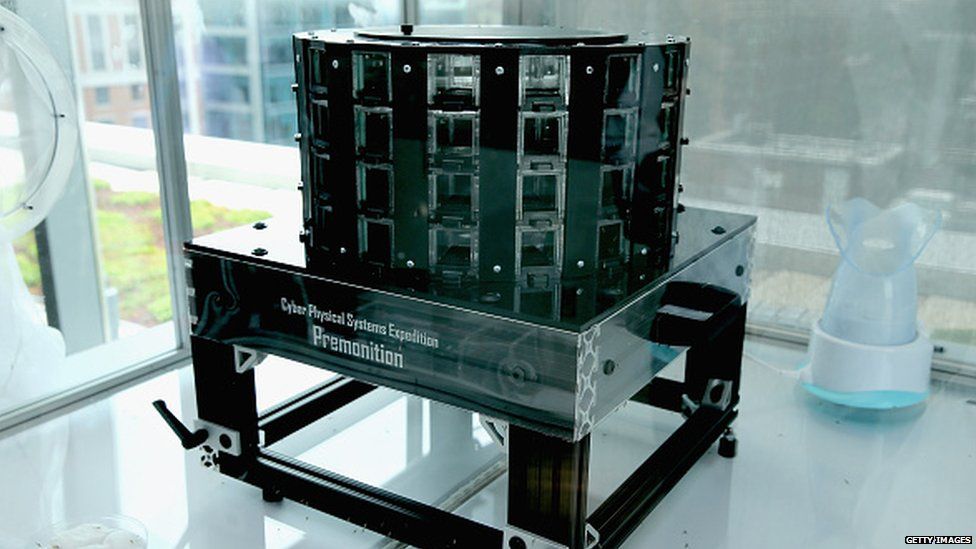 Image caption This Cyber Physical Systems Expedition machine collects and analyzes mosquitoes as part of Project Premonition, which uses drone-enabled collection of mosquitoes and cloud computing to stop pathogens before they become a threat to people. It was shown during the Microsoft Innovation and Policy Center's TechFair in June 2015

C is for Cobotics. Essentially, robots and humans working together.

It could be the future of your workplace. Cobotics is already used in some surgical procedures, to achieve super-human levels of accuracy. For people working on factory assembly lines, robots can perform tasks that require more strength than humans.

D is for Deep Blue, a chess-playing computer developed by IBM. In 1997, it beat world champion Garry Kasparov, who once bragged he would never lose to a machine. At the time, Garry said he wasn't just playing for himself, but for the whole human race, to "defend our dignity". 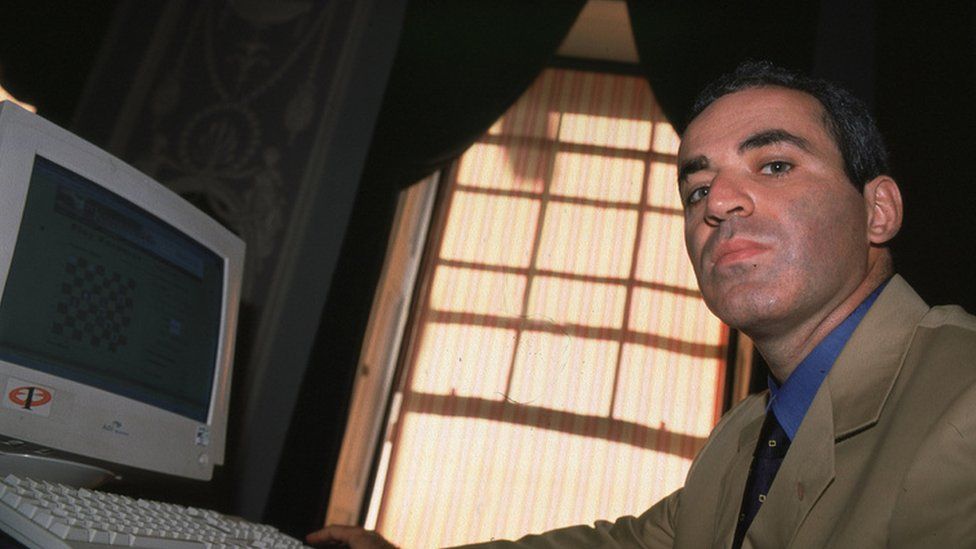 Then he lost. Garry said he glimpsed human intelligence during the match and accused IBM of cheating. IBM denied it. It was only years later that one of the designers said such behaviour by Deep Blue may have been caused by a bug.

E is for Elon Musk. This billionaire businessman thinks AI poses a massive threat to humanity and we could be sleepwalking into disaster. He compares it to a horror film playing out in real life.

"With artificial intelligence we are summoning the demon," he said in 2014.

"In all those stories where there's the guy with the pentagram and the holy water, it's like - yeah, he's sure he can control the demon. Doesn't work out." 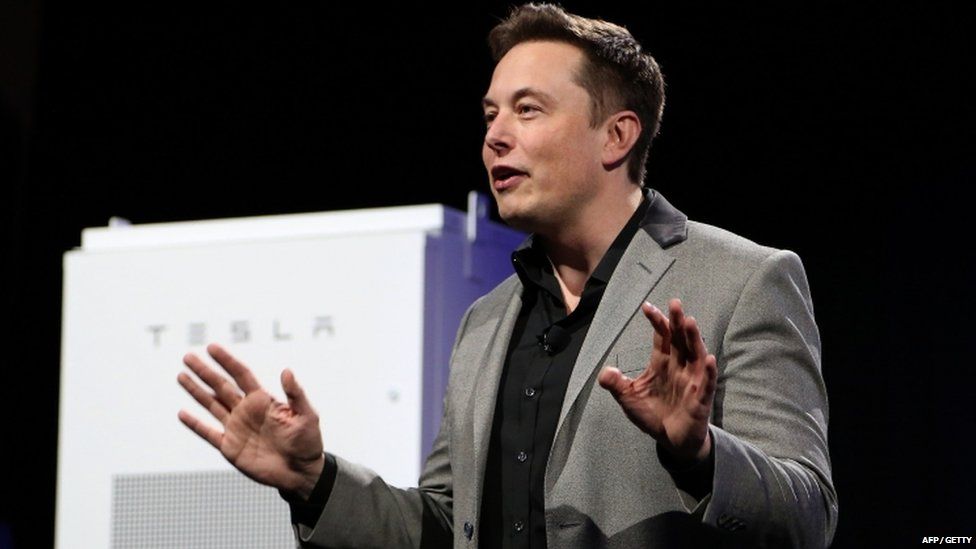 He said he invested in AI firm DeepMind right at the beginning because he was worried about a Terminator-type scenario.

F is for Facebook. Facebook's newsfeed is an example of narrow AI (see N) making decisions about what content to show you. It has facial recognition tools so powerful it can identify you in photographs even if you cover your face.

It also has its own AI labs. Mark Zuckerberg says they are working on tools "translating speech to text, text between any languages, and also being able to answer any natural language question you ask."

G is for General AI also known as Artificial General Intelligence or AGI. This term was coined by experts who felt current AI was treating intelligence as something too specific.

For example, even a chess computer that is better at chess than any other human in the world wouldn't be a general AI because that computer is only intelligent at chess: it can't solve other problems.

H for Human brain. Currently the most intelligent machine in the known universe. Latest estimates suggest the brain is still thirty times faster than the best supercomputers. Something many AI researchers want to change窶ｦ 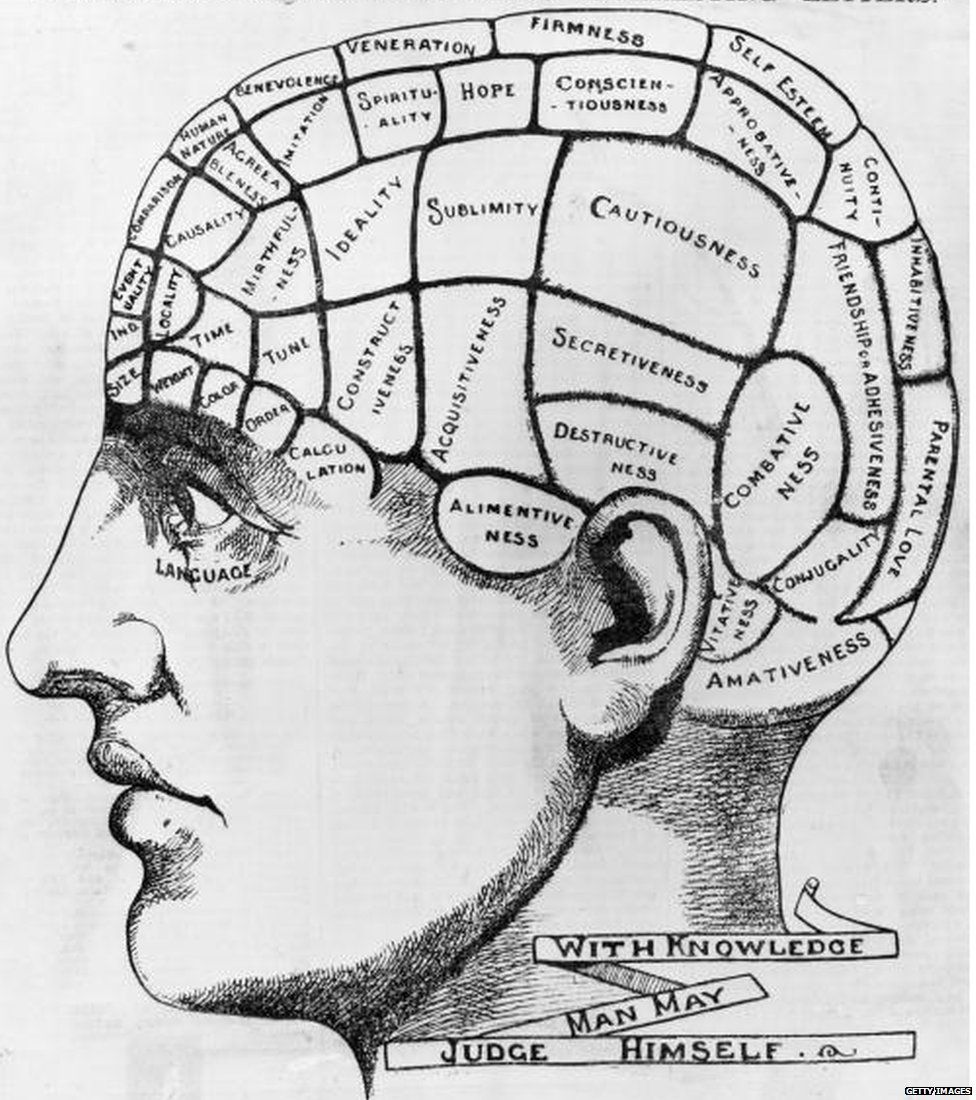 Image caption A drawing of a cross-section of a man's head, illustrating the idea that the brain processes thoughts in different locations according to their type. This was produced in 1880.

I is for Isaac Asimov. The author of fiction such as I, Robot (remember the Will Smith film?) dreamed up three laws of robotics in 1942.

He laid out rules to make AI robots safe in society. Asimov wrote:

2) A robot must obey the orders given it by human beings except where such orders would conflict with the First Law.

3) A robot must protect its own existence as long as such protection does not conflict with the First or Second Laws.

He later added to trump them all: A robot may not harm humanity, or, by inaction, allow humanity to come to harm.

Think about Google's driverless cars and you'll realise how important laws like this are. 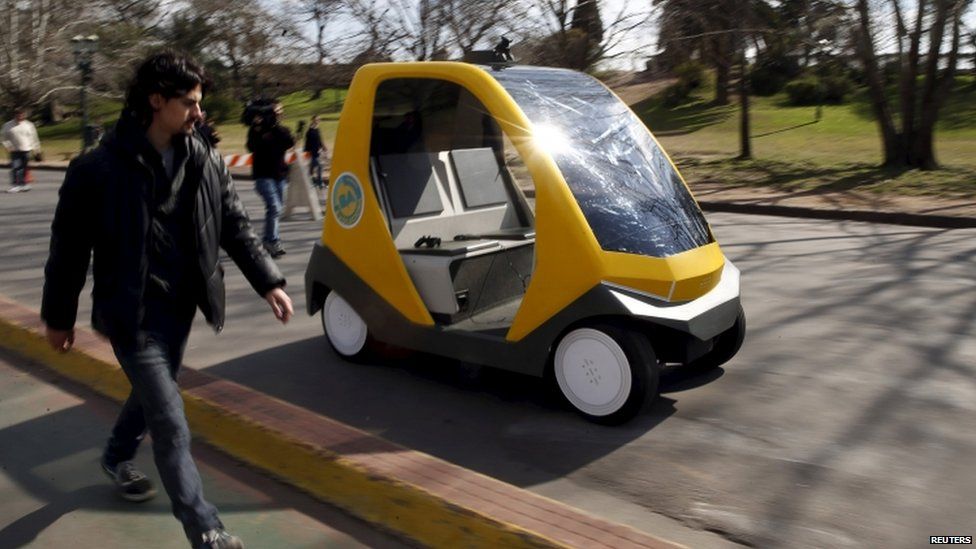 J is for Junk Mail. You may not realise but the reason you don't get all those ads claiming to improve your sex life in your main inbox is due to your Spam filter, which is itself a form of a weak or narrow AI. It learns what is likely to be spam and what is likely to be useful then forwards *each* to corresponding inboxes. 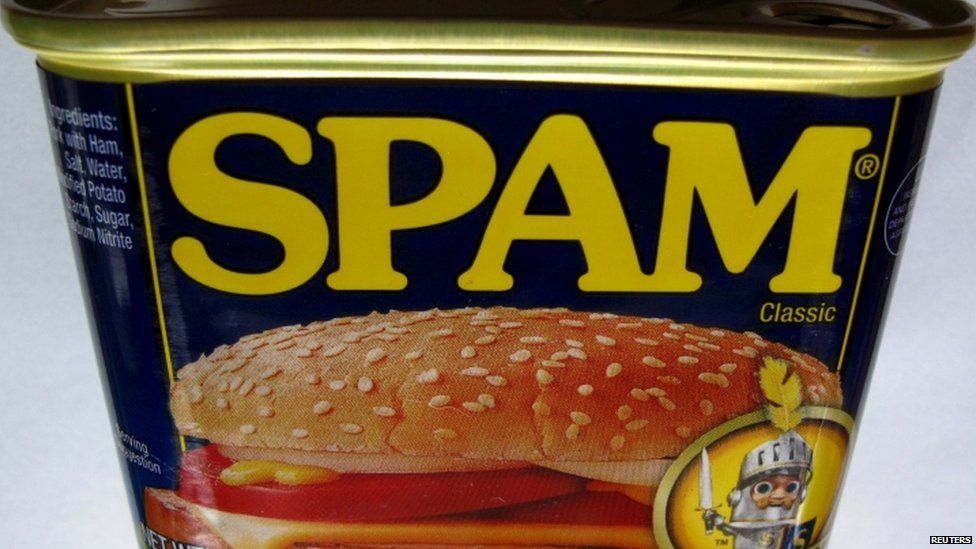 Image caption AI is the reason you don't get SPAM

K is for Kurzweil, one of the most famous AI inventors and experts.

One of his inventions was the first print-to-speech reading machine for the blind. Stevie Wonder became a user of the first production unit, the Kurzweil Reading Machine.

Ray Kurzweil's perhaps most famous for his bestselling book the Singularity is Near. In it, he predicts technology will progress so fast that humans will no longer be able to understand it. 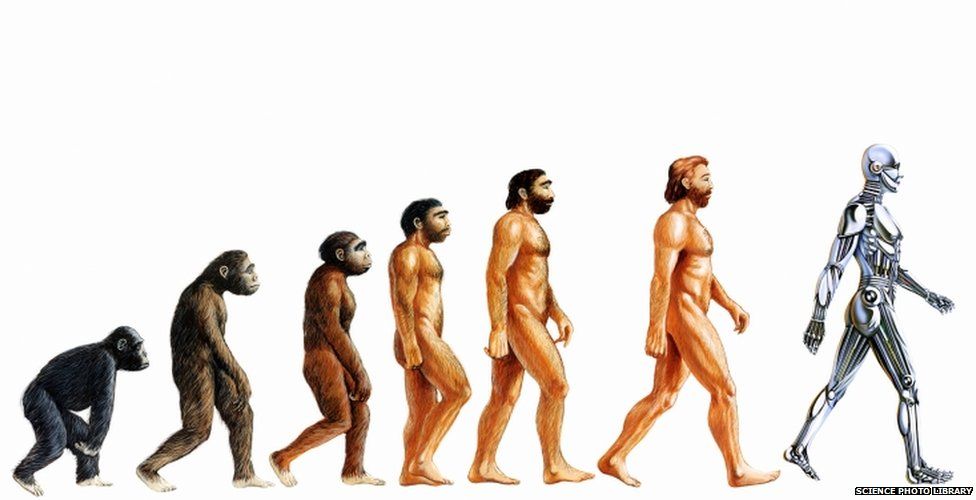 L is for Lethal Autonomous Weapons Systems (LAWS). These don't exist yet but the United Nations says it is possible weapons could be developed that identify and attack a target without human intervention. There's an ongoing debate about how we deal with the issues surrounding such technology. 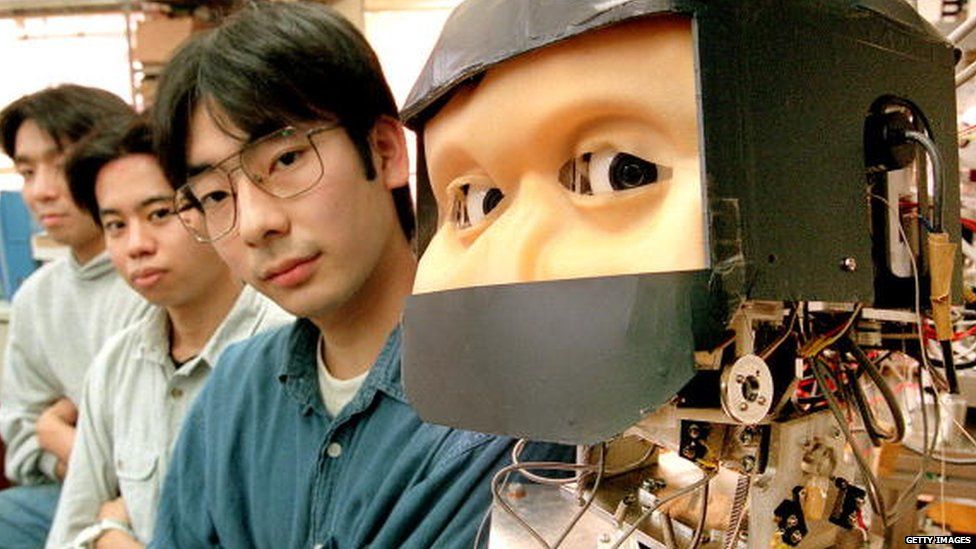 Image caption Does this make you feel uncomfortable? See U is for Uncanny Valley

M is for Moore's Law. This is the idea that processing power for computers will double every two years. Gordon E Moore, who co-founded Intel, first proposed it in 1965. Although it was hugely influential it's no longer a popular theory, but hey, Gordon is still worth $6.1 billion (ﾂ｣4 billion).

N is for Narrow AI, also called weak AI. This applies to computers like Siri, machines that are intelligent but only in specific, pre-programmed areas. Weak AI doesn't 'think' but can exhibit intelligent behaviour if the circumstances are right. 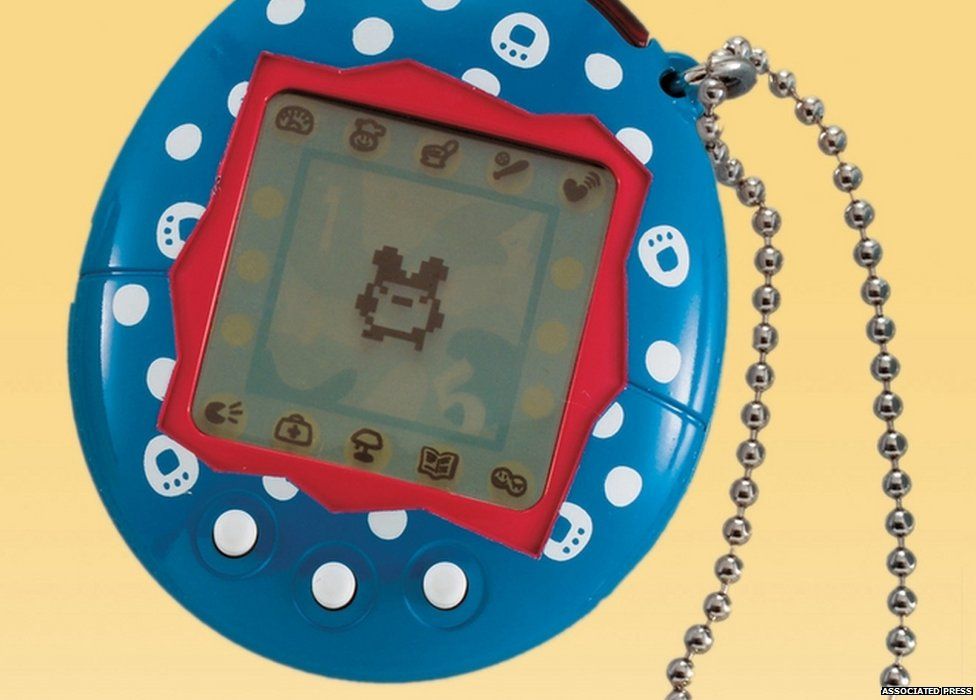 Image caption Tamagotchis were an example of narrow AI

O is for Over the top. It's easy to be scared by AI, partly because it's hard to get your head around and our thinking has been shaped by sci-fi movies and over-excited media reports. AI is here already: Google Translate is a form of AI. Lots of experts hate the way debate around AI has become dominated by fear. Many think technology will make our lives better if we tackle the difficult questions posed by such progress. 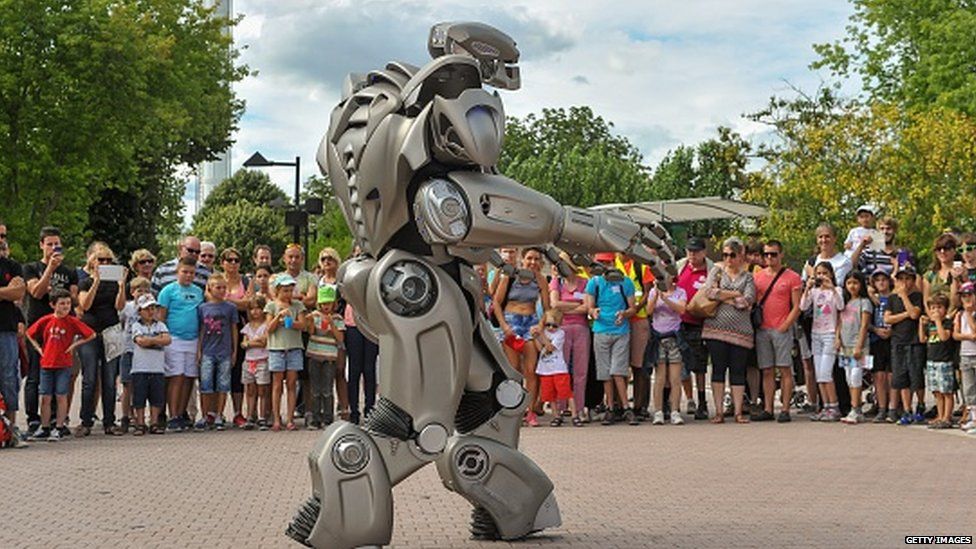 Image caption 'Titan the robot', the new attraction of the Futuroscope theme park in France

Q is for Quantum computers. Seen by some as the next stage in computing technology, running at speeds far beyond anything inconceivable now. Increasing the power and efficiency of computer hardware will be essential to the development of artificial intelligence. 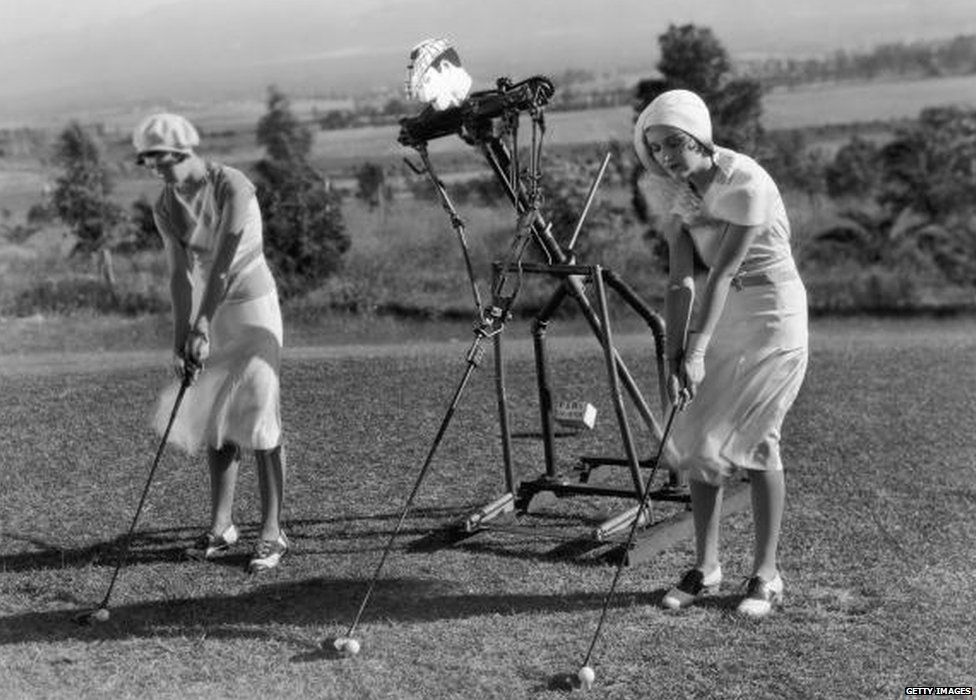 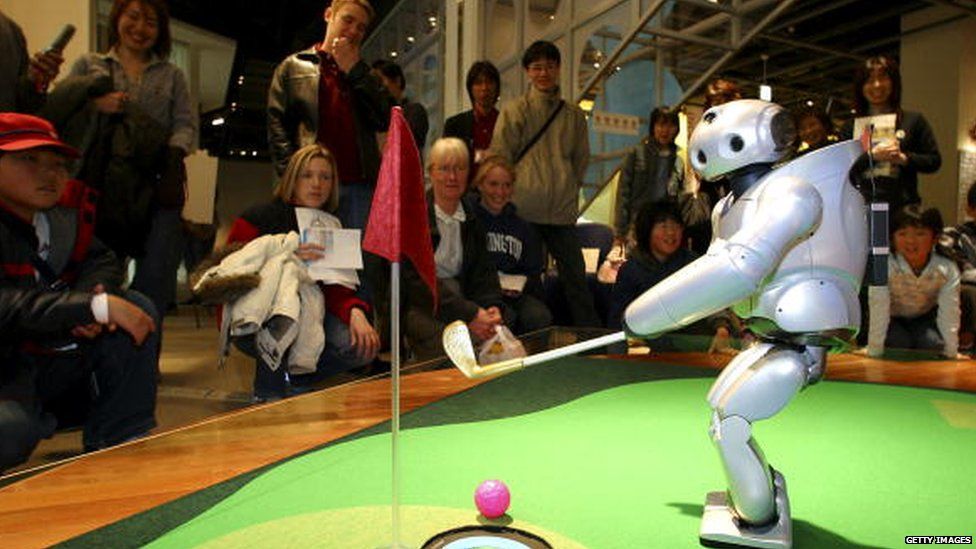 R is for Robot. Remember a robot is a container for AI, not AI itself. 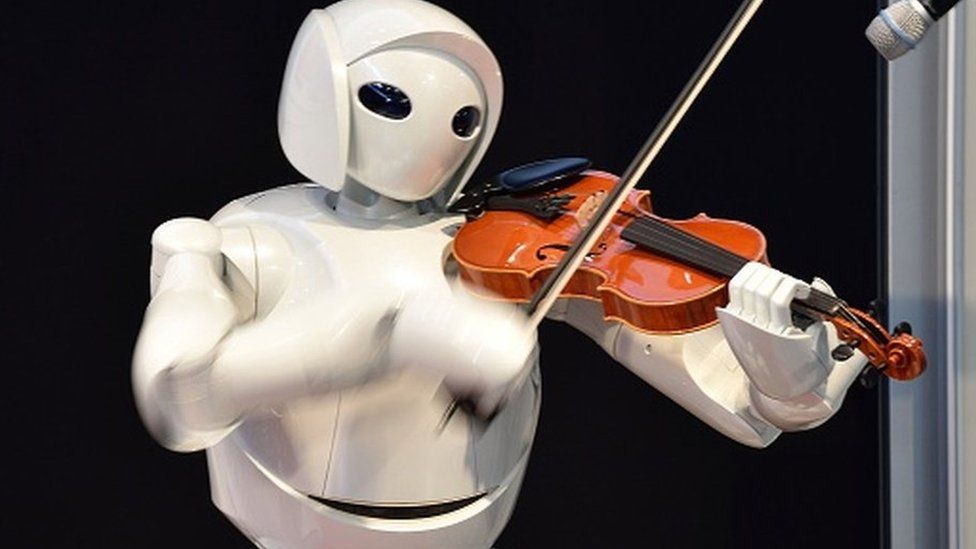 Image caption Toyota's violin-playing robot. The robot, which has 17 joints in both arms, uses precise control to play the violin. Toyota aims to develop robot technology to assist nursing and medical care by the year 2010

S is for the Singularity. The hypothetical tipping point where AI overtakes human intelligence. Because some see self-improvement as a fundamental part of intelligence, they think once strong AI is developed, it could re-design itself without human interference. We'd have an intelligence explosion. Futurists like Vernor Vinge and Ray Kurzweil are big proponents of the singularity happening within a lifetime. Others say we don't know enough about how the human brain works, let alone how an AI with human-like intelligence would work, to make such predictions. 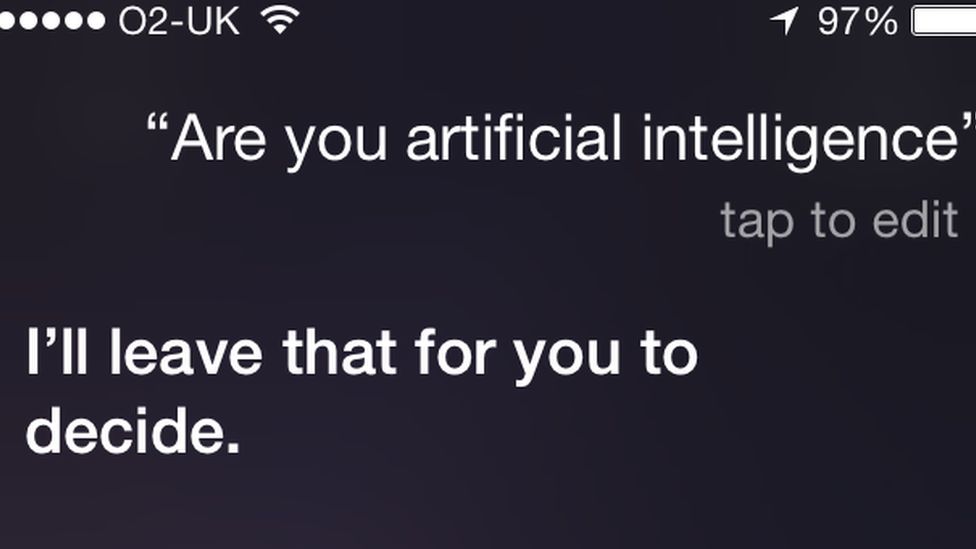 T is for Turing Test. Alan Turing, the WW2 code cracker who killed himself in 1954 after hormone treatment to "cure" his homosexuality, was the father of modern computing. 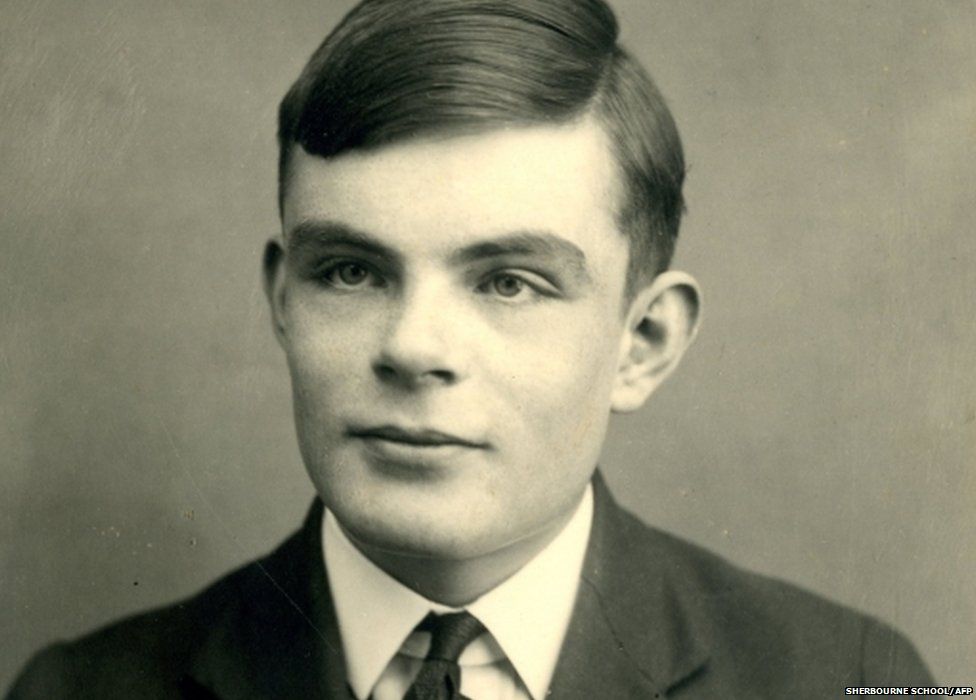 He came up with a test for AIs. He said an AI machine has to be able to fool people into believing it is human in conversation. There are significant limitations to the test (something Turing himself acknowledged). However it was hugely influential and other scientists have gone on to try and refine it. 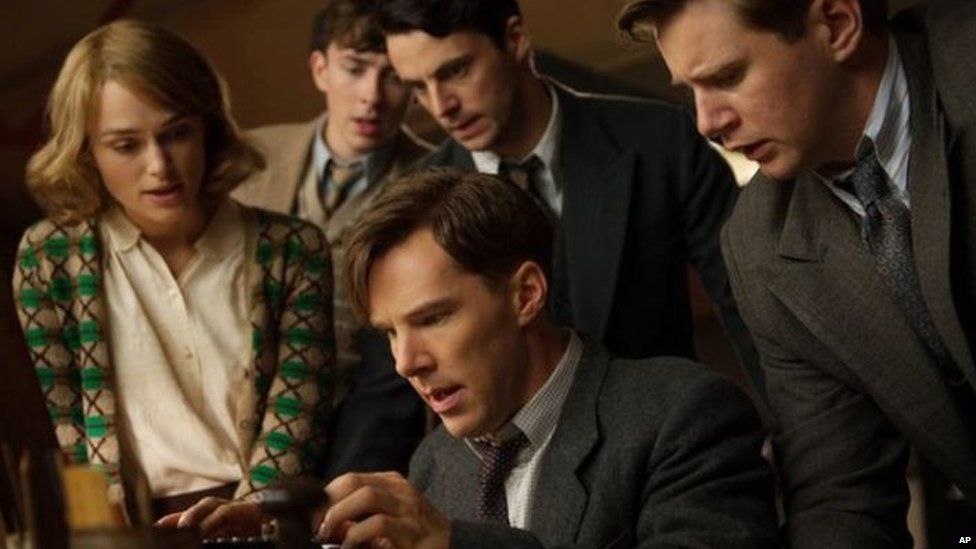 U is for Uncanny Valley. This is used to describe feelings of unease or revulsion some people get when they encounter a humanoid robot that looks a little too human. 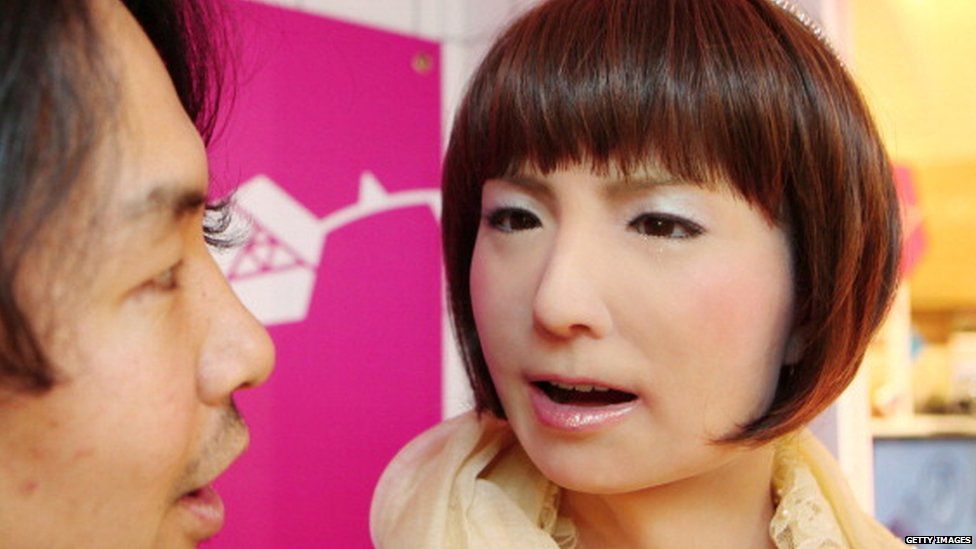 Image caption Female humanoid robot 'Minami' at the Takashimaya department store in Osaka, in 2013. 'Minami' used various phrases such as 'Do you come alone today' or 'Let's take picture together' when speaking with shoppers.

V is for Video games. Video games are a form of AI you're probably familiar with. If you're not playing against another human, you're gaming an intelligent machine. Sometimes computers have their intelligence dumbed down to make it fair for you to play- there's no way you can aim as well as the computer shooter can.

W is for Whole brain emulation or mind uploading. This is a kind of computer-based version of Dumbledore's memory pool, the pensieve, thought up by JK Rowling. 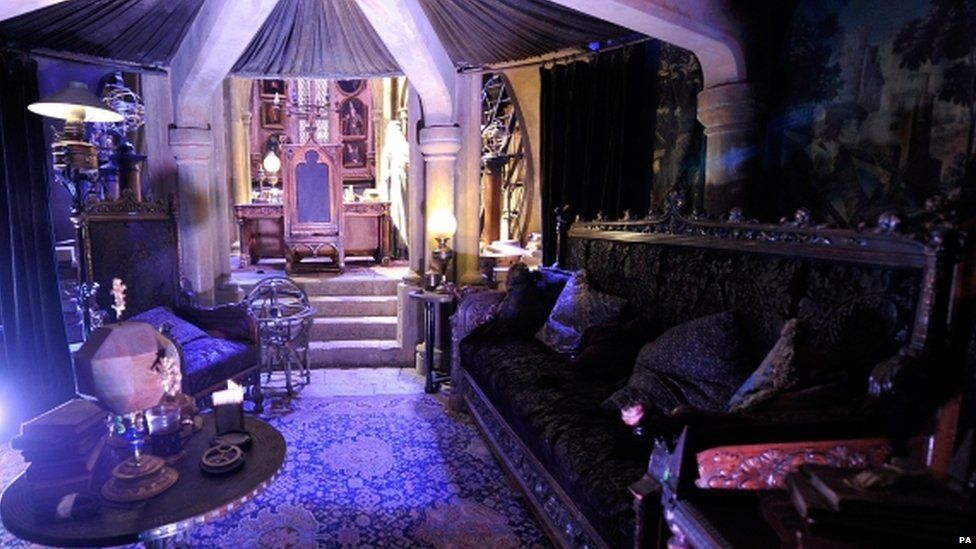 Image caption Dumbledore's office, where he kept his pensieve.

The idea is that you could copy parts of your brain; your memories and your thoughts, onto a hard drive. The next stage would be to input some AI into that hard drive and have this external mind work independently of you. This technology does not exist at the moment. 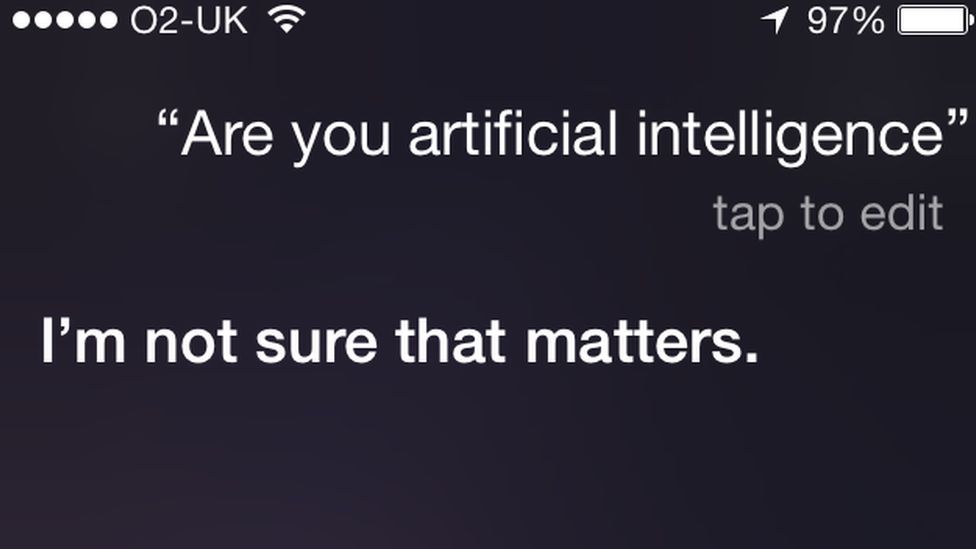 Image caption Siri is an example of Narrow AI

X is for existential risk. (OK we cheated with this one) This describes a catastrophe from which humanity will never recover. Essentially, killer robots. This technology may not be here now but scientists and ethicists want us to set up safeguards to make sure humanity isn't wiped out by accident. For example, imagine a paper-clip making AI that was so focussed on its own goal making paper clips that it turned the whole world to paper clips. You can thank Professor Nick Bostrom for that particular scenario.

Y is for Year. The year in which strong AI will be developed (or even more controversially that the singularity will occur) varies between experts. Ray Kurzweil thinks the singularity will be with us in 2045, something Microsoft Co-founder Paul Allen describes as "far fetched." He'd have no time for futurologist Vernor Vinge then, who thinks 2030 is the year technology overtakes human intelligence. Predictions AI lies 15 to 25 years in the future are the most common, from experts and non-experts alike, according to Stuart Anderson from the Future of Humanity Studies in Oxford.

Z is for Zero. The number of strong AIs developed. So far...