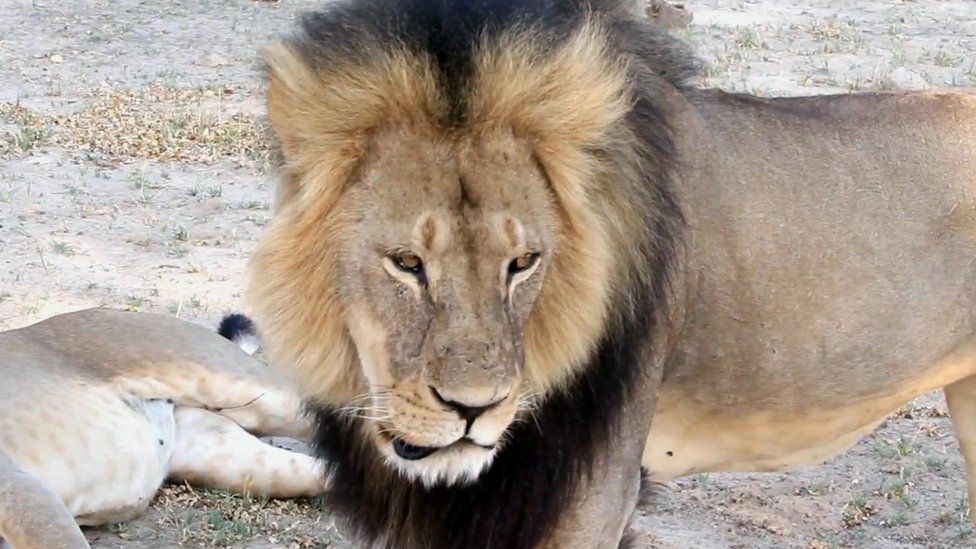 An American dentist is wanted by police in Zimbabwe after a well-known protected lion was killed.

In a statement, Mr Palmer, from Minnesota, said: "I had no idea that the lion I took was a known, local favourite, was collared and part of a study until the end of the hunt."

He says that he'd believed the hunt had been legal. 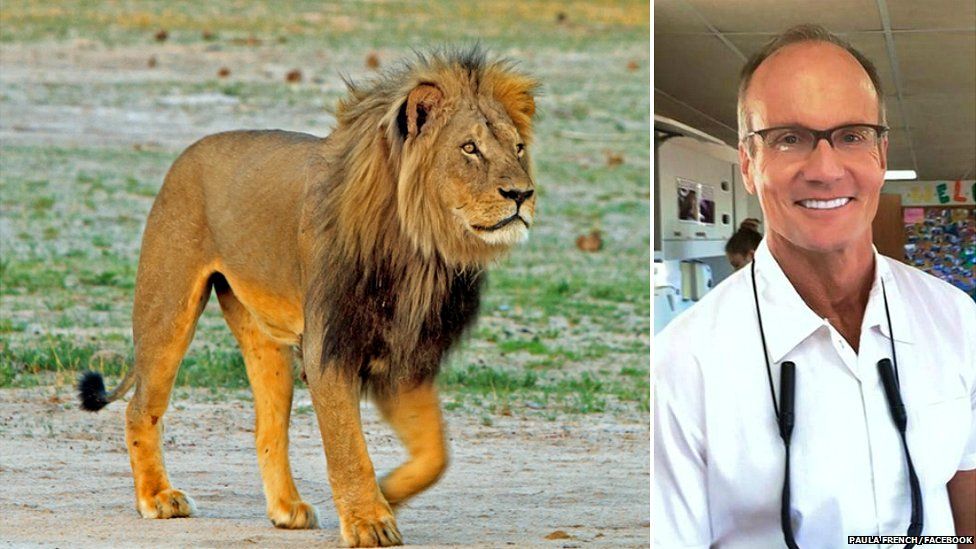 The Zimbabwe Conservation Task Force (ZCTF) says James Palmer and two other men, a professional hunter and a farm owner, tied a dead animal to a car to lure Cecil the lion out of a national park in the middle of the night. 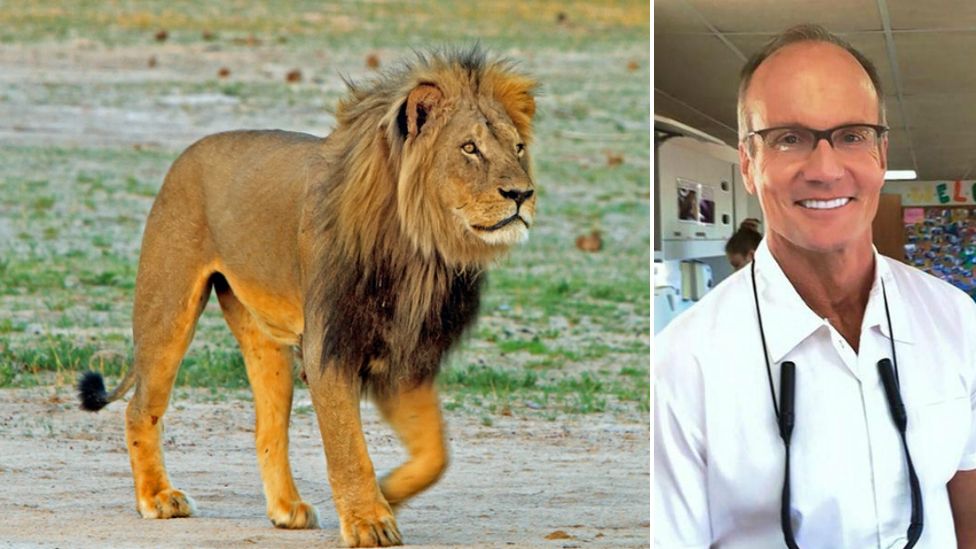 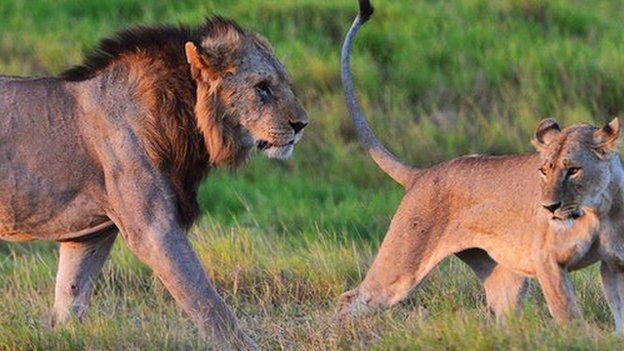 Why Zambia is open for big cat hunts

He was then shot with a crossbow.

The wounded lion was found 40 hours later and had been shot dead with a gun.

The lion, which was being studied by researchers at Oxford University, was then skinned and beheaded.

Attempts were made to destroy its collar, which was fitted with a tracking device.

Cecil was a major tourist attraction in Hwange National Park - Zimbabwe's largest game reserve - and the 13-year-old animal had a reputation for being friendly towards visitors.

Hwange attracted 50,000 visitors last year, about half of them from abroad.

Was the killing illegal? 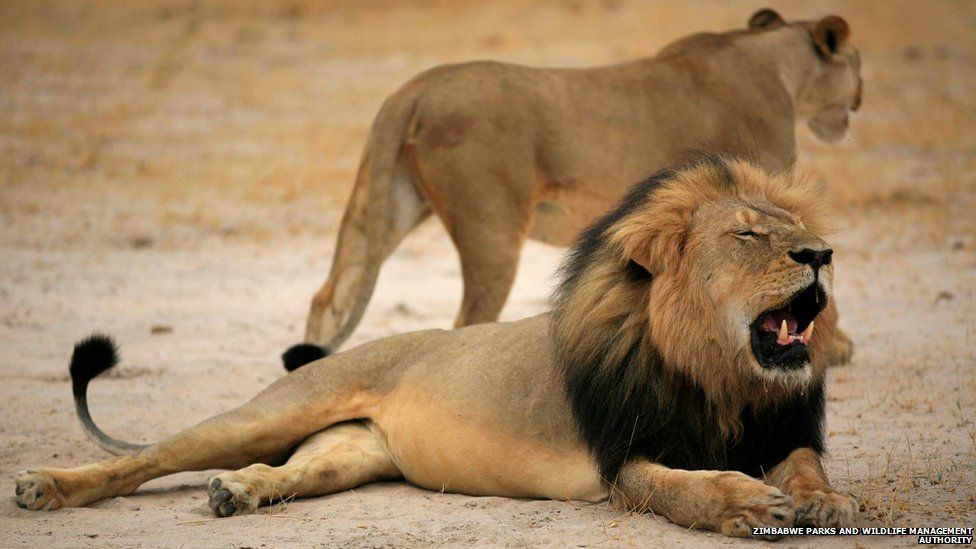 Killing the lion was illegal because the farm owner didn't have a hunting permit, says the ZCTF - a local charity.

The men say they didn't know the lion was protected.

"Both the professional hunter and land owner had no permit or quota to justify the offtake of the lion and therefore are liable for the illegal hunt," the Zimbabwean Parks Authority said in a statement.

"[They] are being jointly charged for illegally hunting the lion."

Hunting lions is legal in several countries in southern Africa, including Zimbabwe, but groups must obtain a valid permit from authorities.

What will happen to Cecil's pride?

Cecil was the head of two prides, including six lionesses, 12 cubs and another male called Jericho.

ZCTF chairman Johnny Rodrigues said: "The saddest part of all is that now that Cecil is dead, the next lion in the hierarchy, Jericho, will most likely kill all Cecil's cubs."

The saddest part of all is that now that Cecil is dead, the next lion in the hierarchy, Jericho, will most likely kill all Cecil's cubs
Johnny Rodrigues
Chairman of the Zimbabwe Conservation Task Force

Professor David Macdonald, who founded the Wildlife Conservation Research Unit at Oxford University, agreed Cecil's death would lead to a "cascade" of other deaths.

"Cecil was the only male so it is highly likely that the incoming males will kill his offspring."

There are reported to be 30,000 lions left across the whole of Africa, but the professor warned that the figure was likely to be an overestimate.

He said that he hoped there would be a "silver-lining" to Cecil's death with an increase in support for his research. 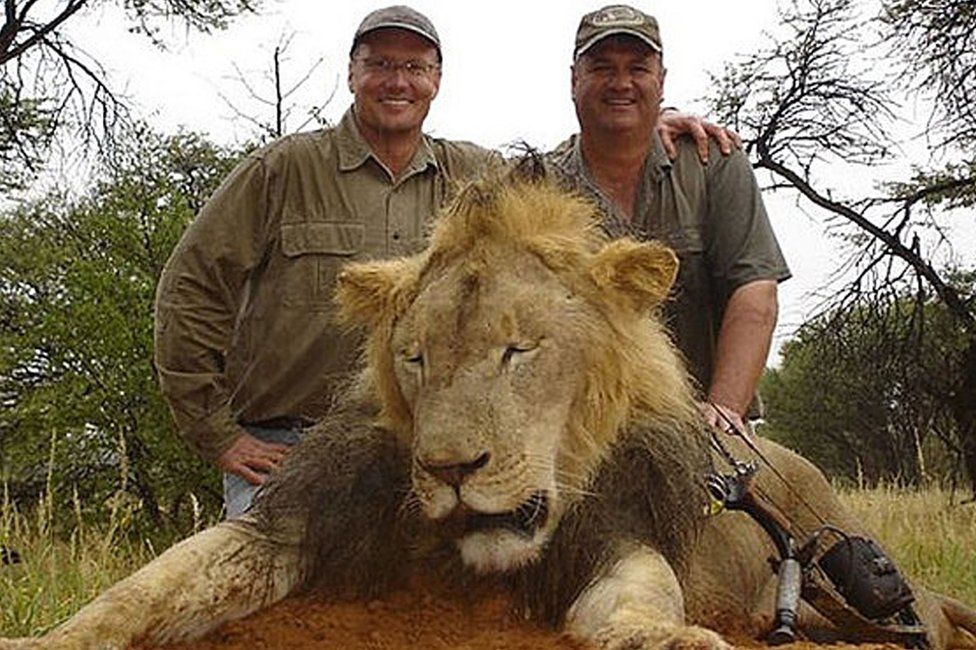 The reaction has been fierce, especially on social media sites.

The Twitter and Facebook accounts and website of James Palmer's dental practice, River Bluff Dental in a suburb of Minneapolis, Minnesota, have been shut down after being flooded with negative comments. 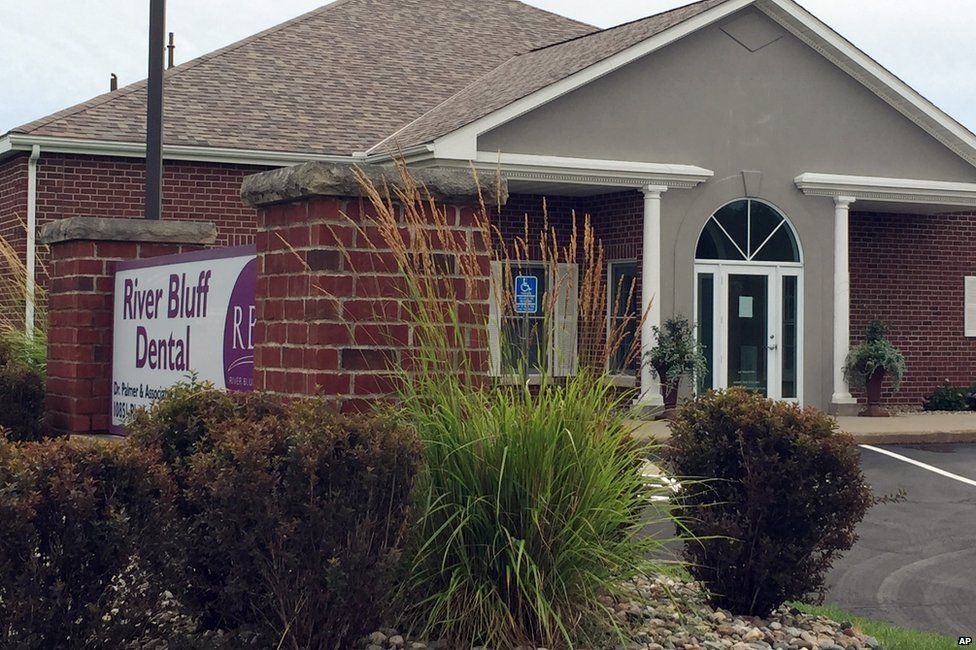 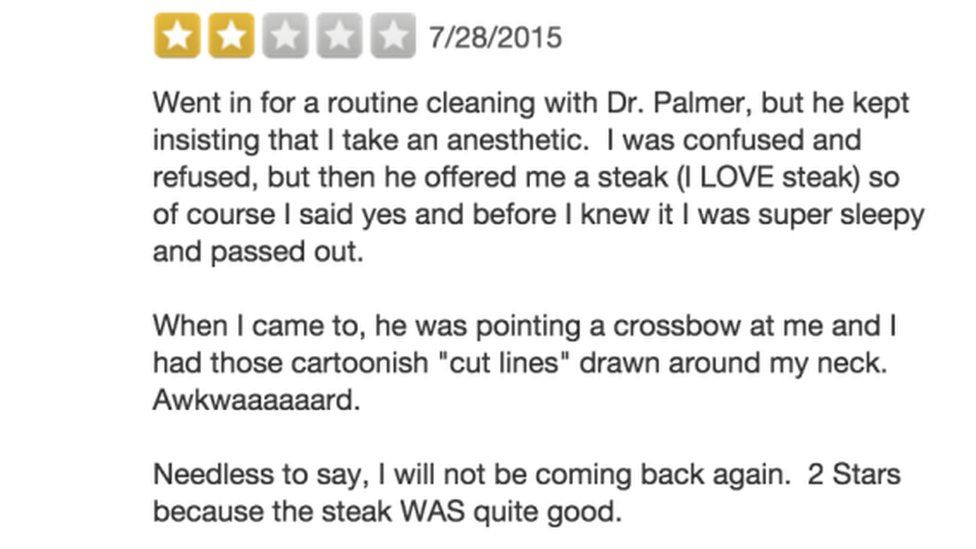 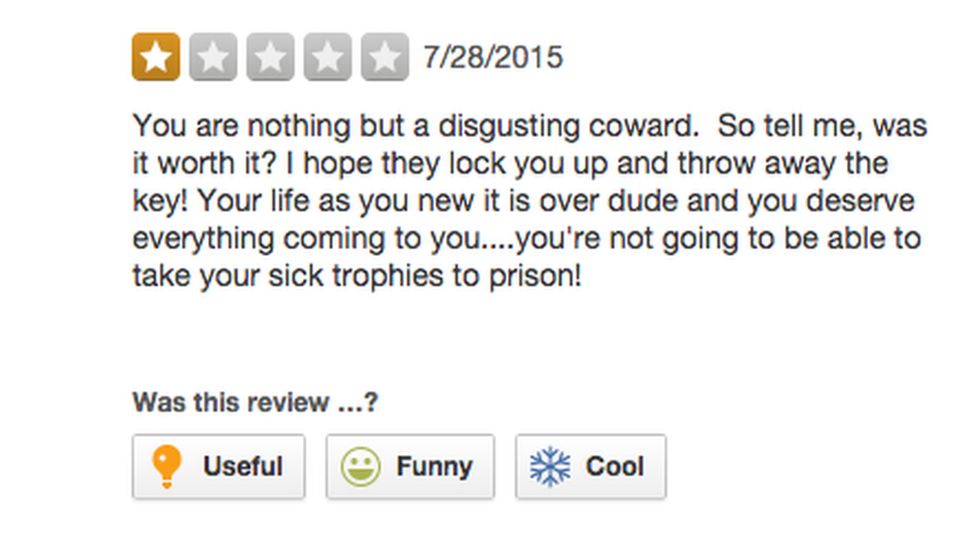 There's also a petition, which has been signed by nearly 250,000 people, called Demand Justice For Cecil The Lion In Zimbabwe.

A makeshift memorial has also been set up outside his office and people have dropped off stuffed animals and flowers. 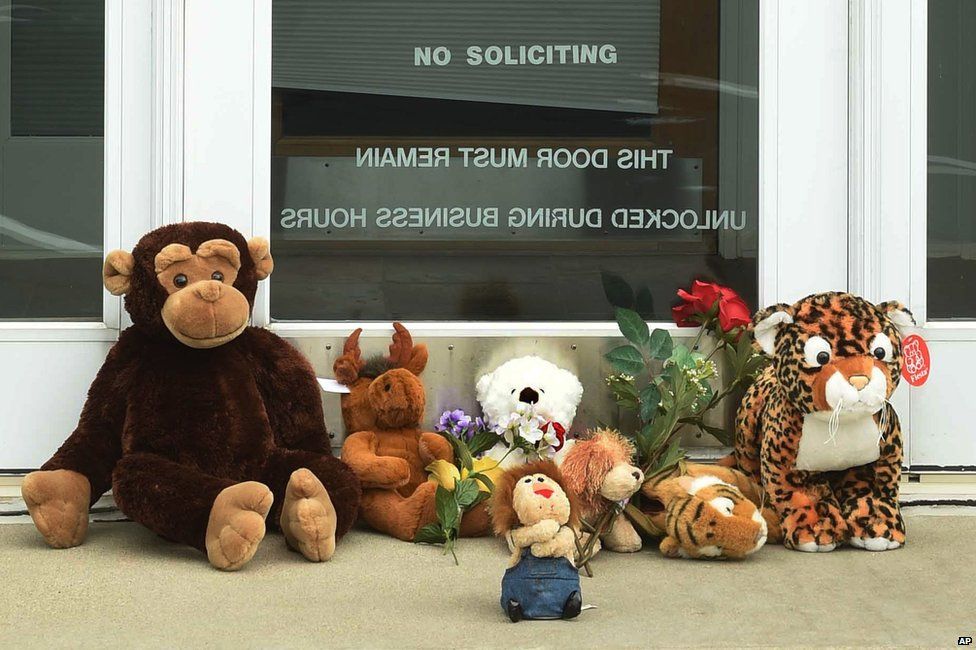 Stars have also been venting their outrage on Twitter.

However, some people on Twitter said the lion's death had to be put into perspective.