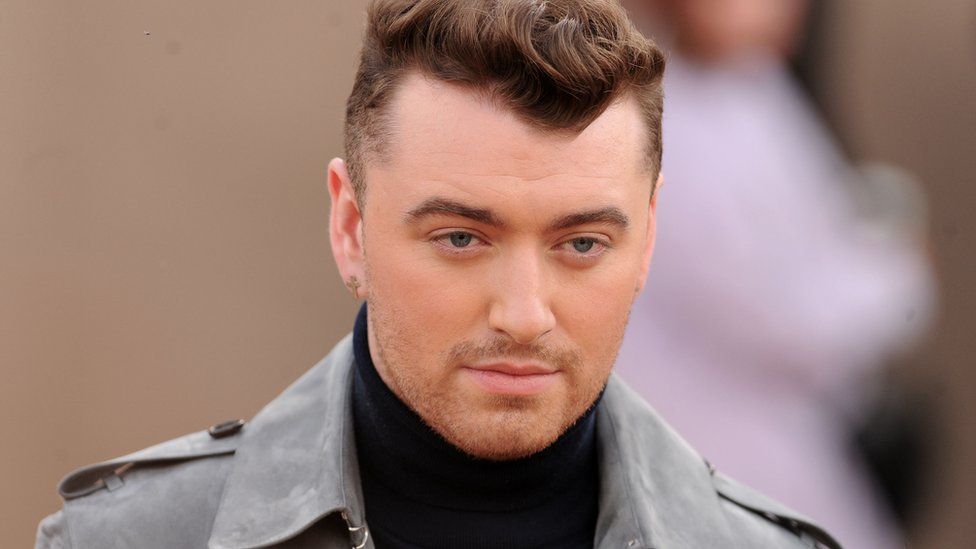 He wasn't at the Black Entertainment Television ceremony, so the prize was picked up for him by actor Anthony Anderson.

"Sam Smith isn't here tonight because he's white and he didn't think he would win at the BET Awards," he told the audience at the Microsoft Theatre in Los Angeles.

"He didn't think he could win. But we showed him that we love him, too." 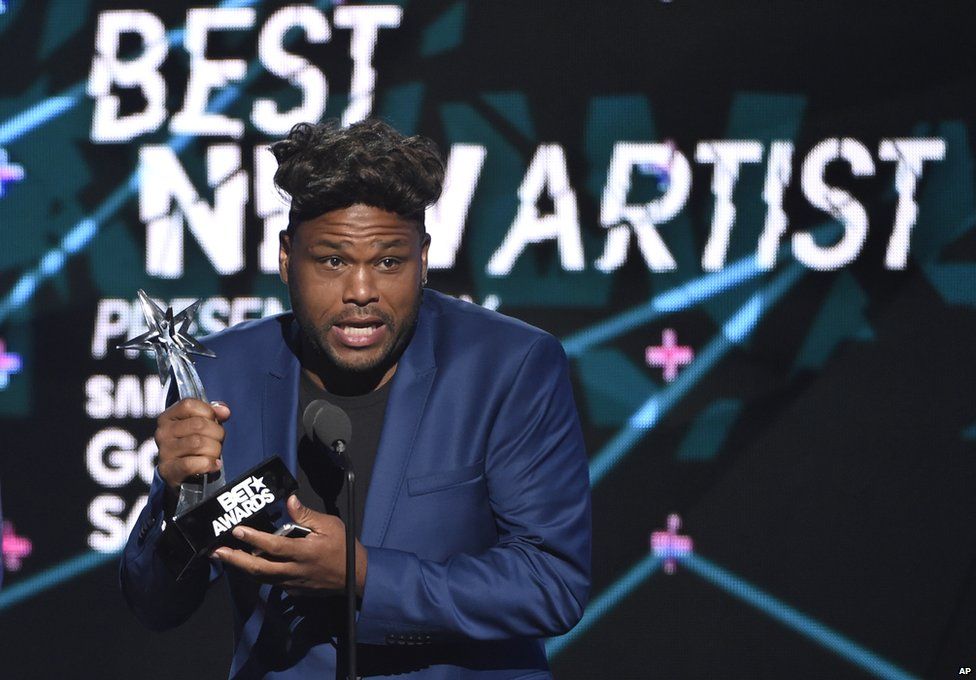 Image caption Anthony Anderson stars in ABC's Black-ish and has also appeared in Transformers, The Departed and Scream 4

She gave a shout out to fellow nominee and rising rapper Dej Loaf, as well as her rapper and boyfriend Meek Mill, who sat next to her at the show (and she later joined him onstage for his performance). 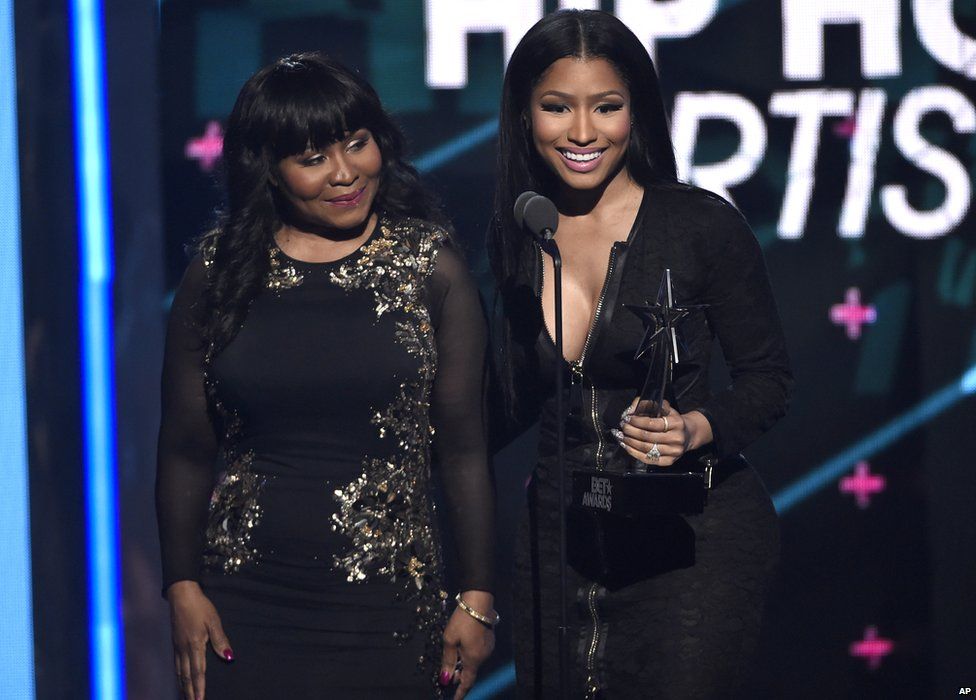 "Momma, I want to thank you from the bottom of my heart for everything you've done for me. I love you so much," she said.

"Shout out to all the girls nominated... Def Loaf... you've been very, very interesting to me and super forward."

Nicki Minaj also picked up the viewers' choice award for her track Only featuring Drake, Lil Wayne and Chris Brown. 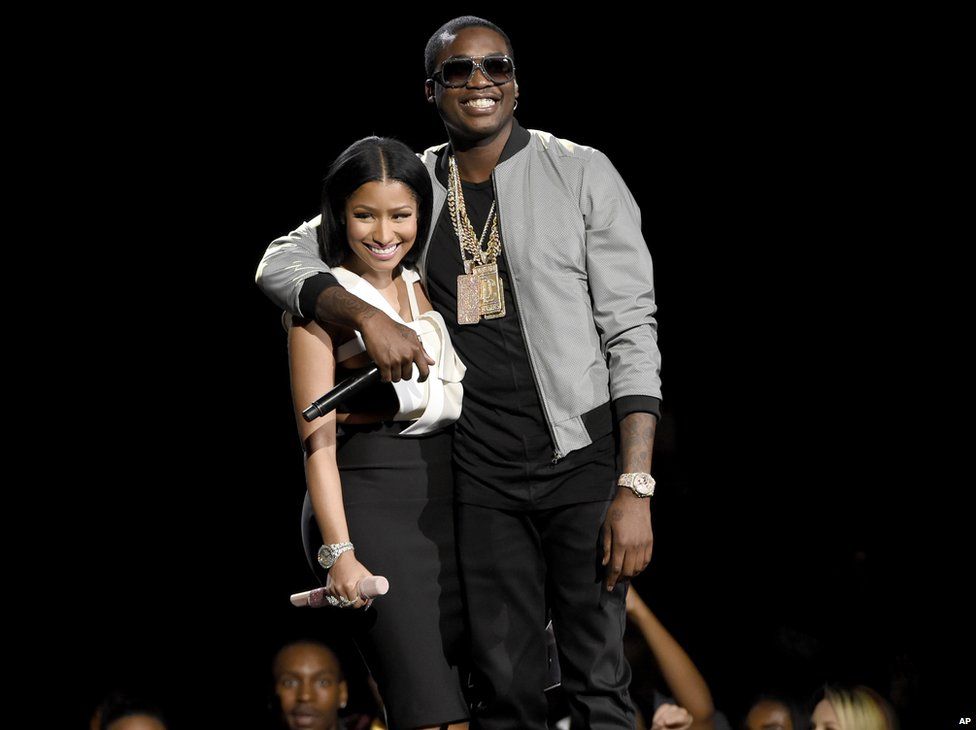 Rapping on top of a police car with a large American flag waving behind him, hip-hop star Kendrick Lamar kicked off the BET Awards.

Members of the audience rapped along to Alright, while dancers walked down the aisles and a huge American flag was waved behind behind Lamar.

"This is for Compton, this is for Watts," the Los Angeles-born rapper said. 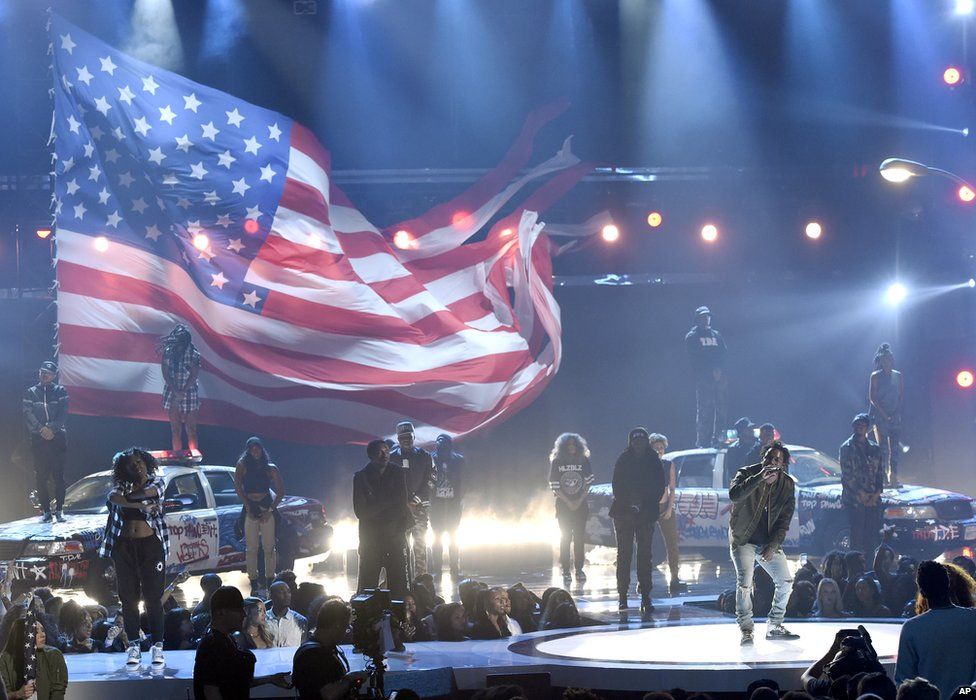 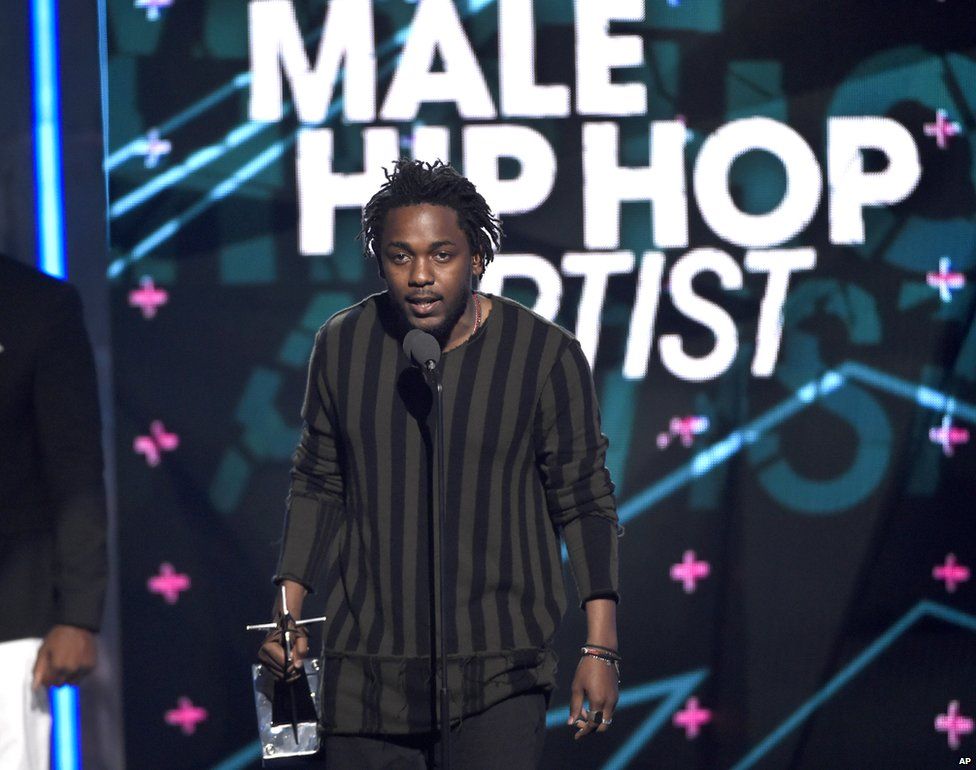 Terrence Howard, star of the hit Fox series Empire, won the first award for best actor for his role as Lucious Lyon.

"To the Empire," he yelled three times. "I got to thank Taraji P Henson because she stood up for a brother." 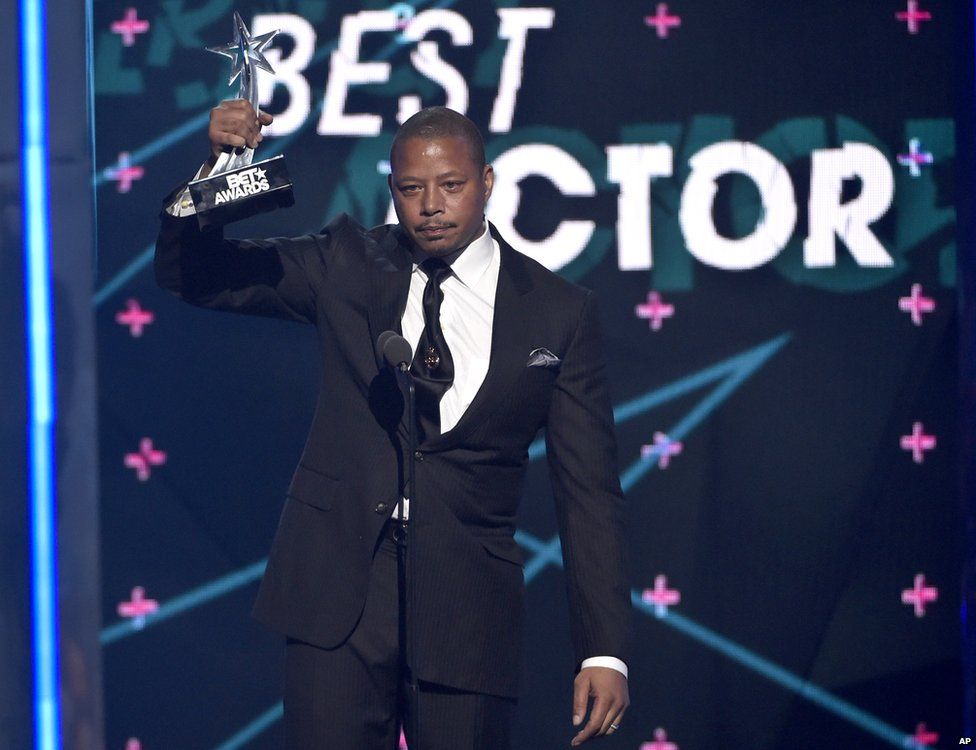 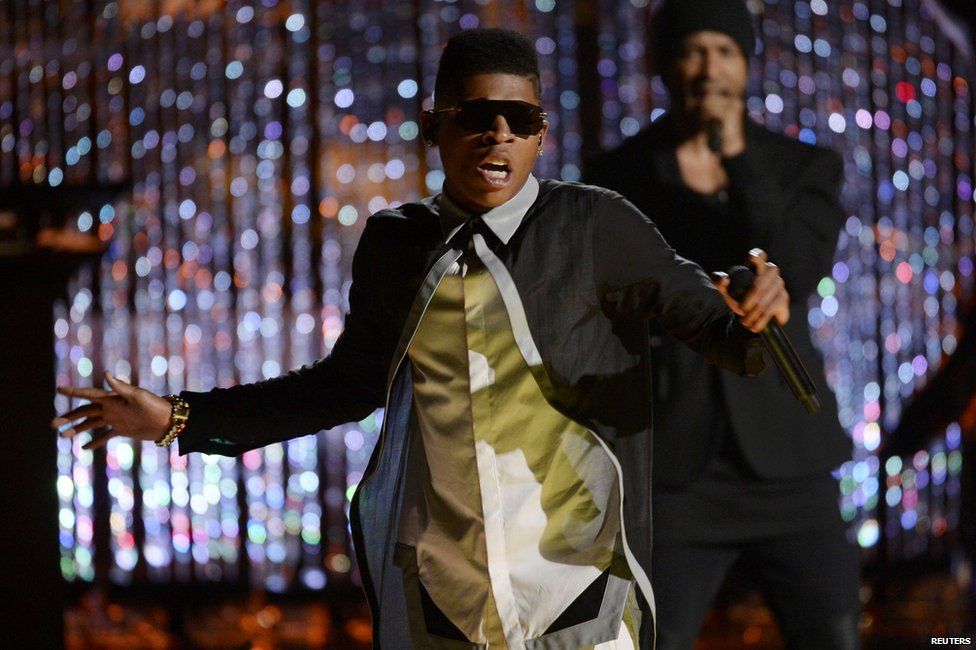 P Diddy fell through a hole in the stage while performing to celebrate Bad Boy Records' 20th year anniversary, the label he founded in 1993.

Lil Kim, Mase, Faith Evans, 112 and The Lox joined him as they performed a medley of their hits including Peaches And Cream and Bad Boy.

A video montage of Notorious BIG appeared in the background as his verse from Mo Money Mo Problems played.

This was P Diddy's first appearance in public since he was arrested last Monday on suspicion of assault with a deadly weapon.

He's accused of assaulting his son's football coach with a kettlebell on the UCLA campus in Los Angeles. 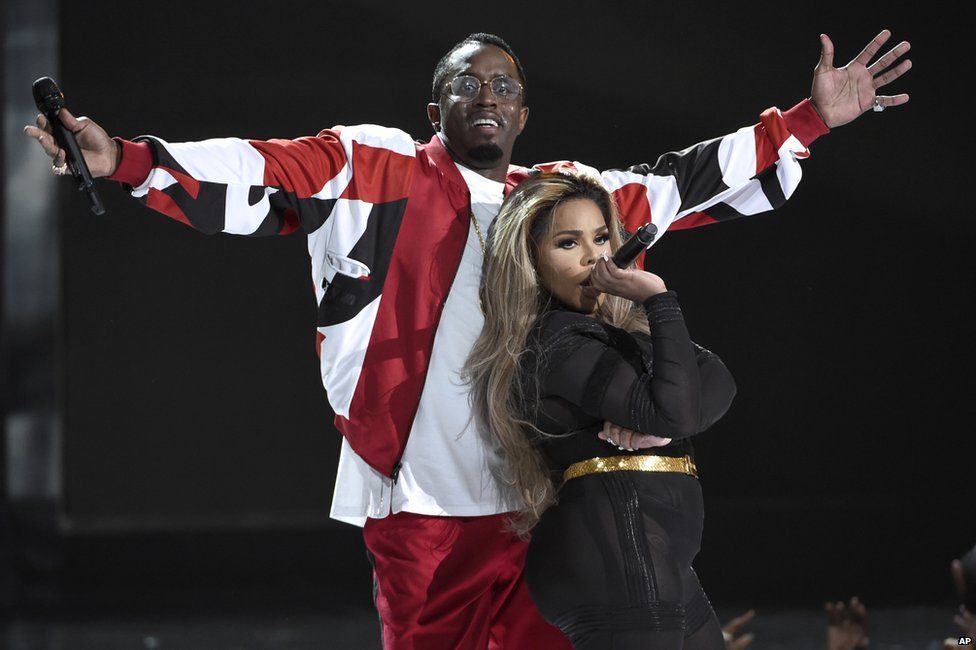 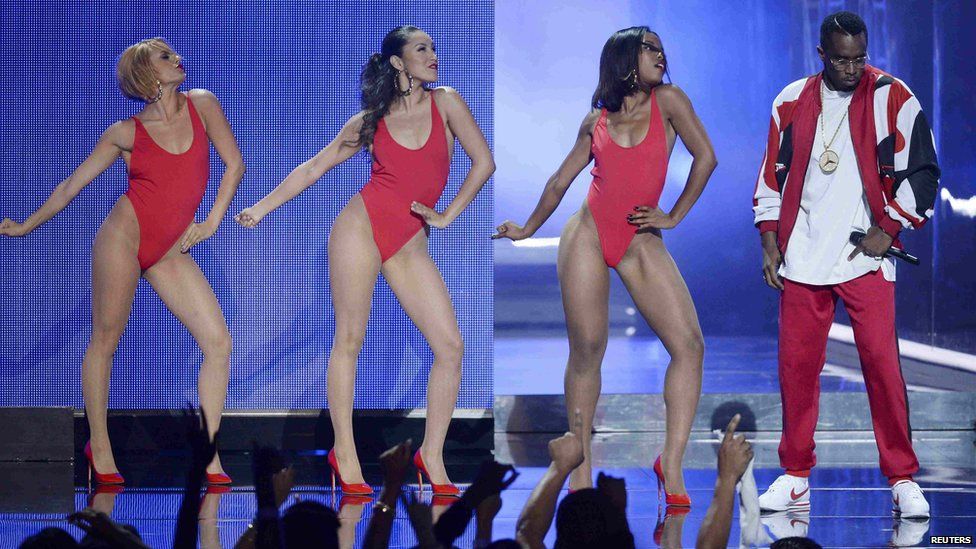 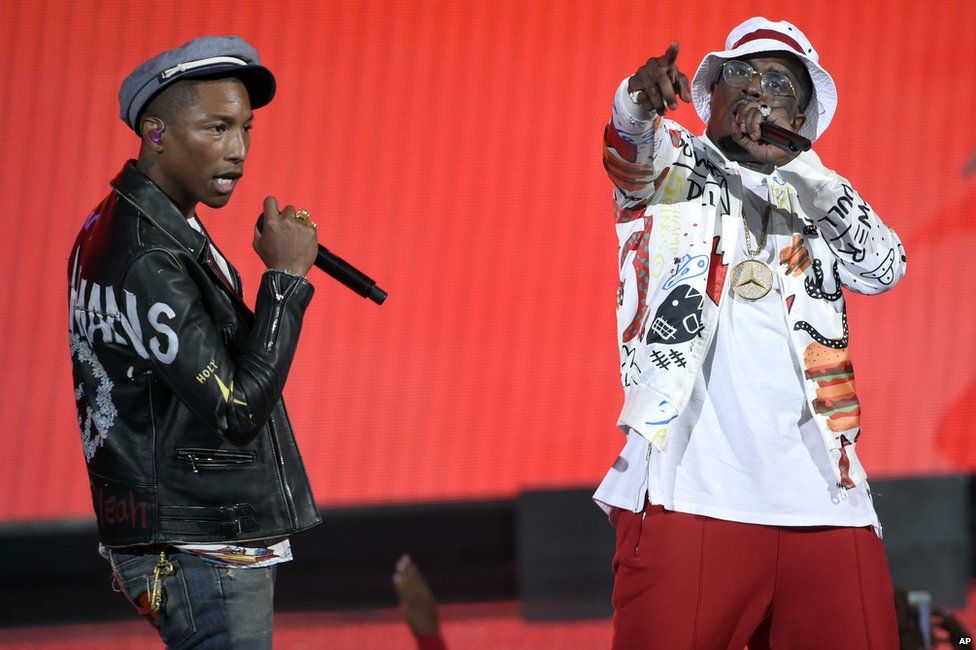 "A lot has changed in my life, a lot of mistakes, a lot of lessons learned. The best thing I'm most thankful for is my daughter," he said onstage.

"I'm so thankful and happy to have the loyal fans... and everybody here that knows me, to know me is to love me." 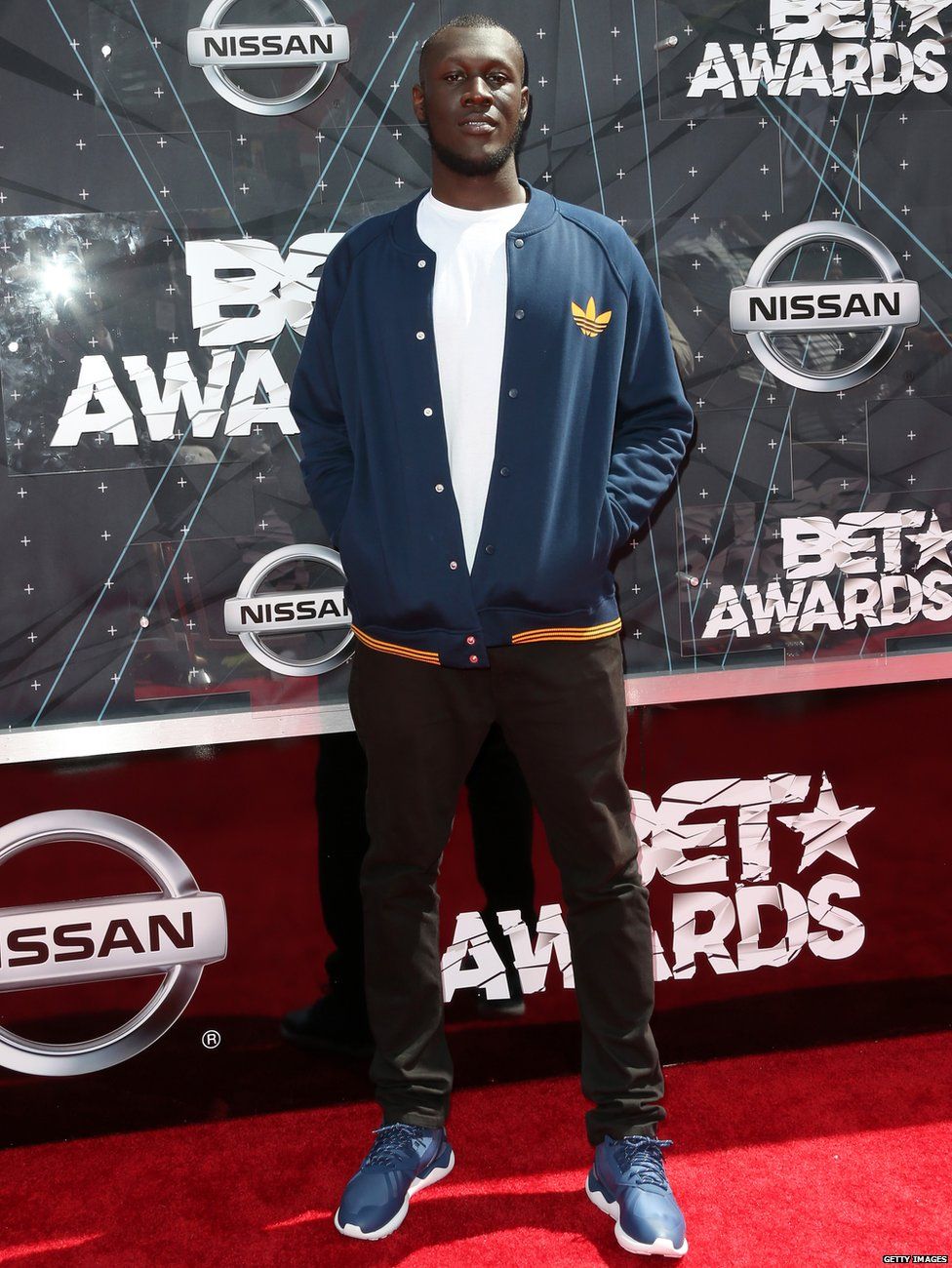 Image caption Stormzy, real name Michael Omari, was in Los Angeles to pick up his award

UK rap and grime artist Stormzy won in the best international act category to add to a growing list of successes this year. He sold out his debut UK tour, shared a stage with Kanye West at the Brits, and made the top three of the BBC's Sound Of 2015 list, which aims to showcase emerging artists for the coming 12 months. 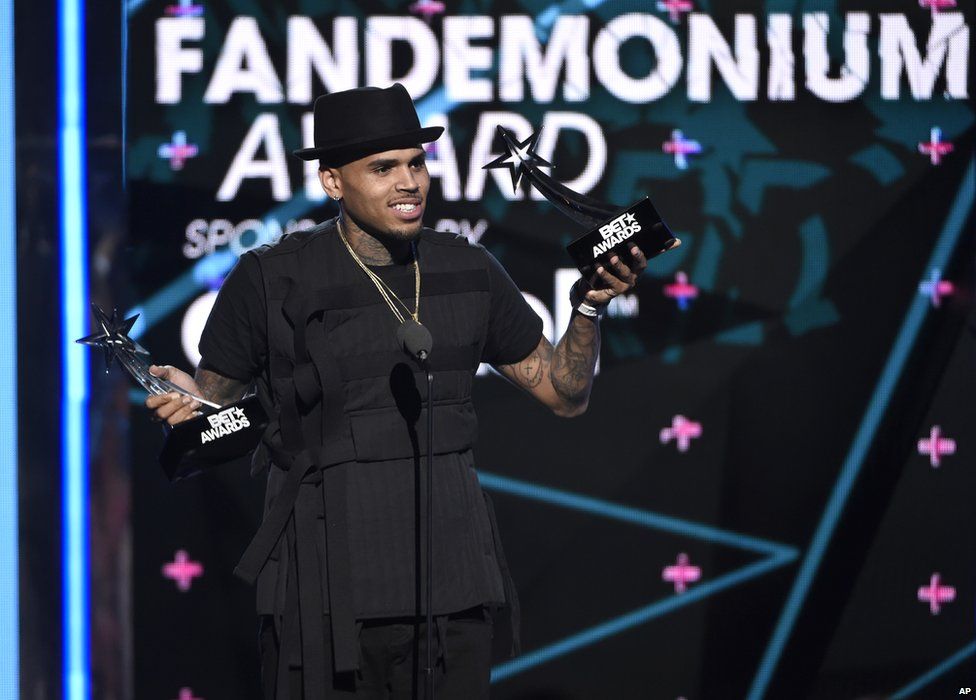 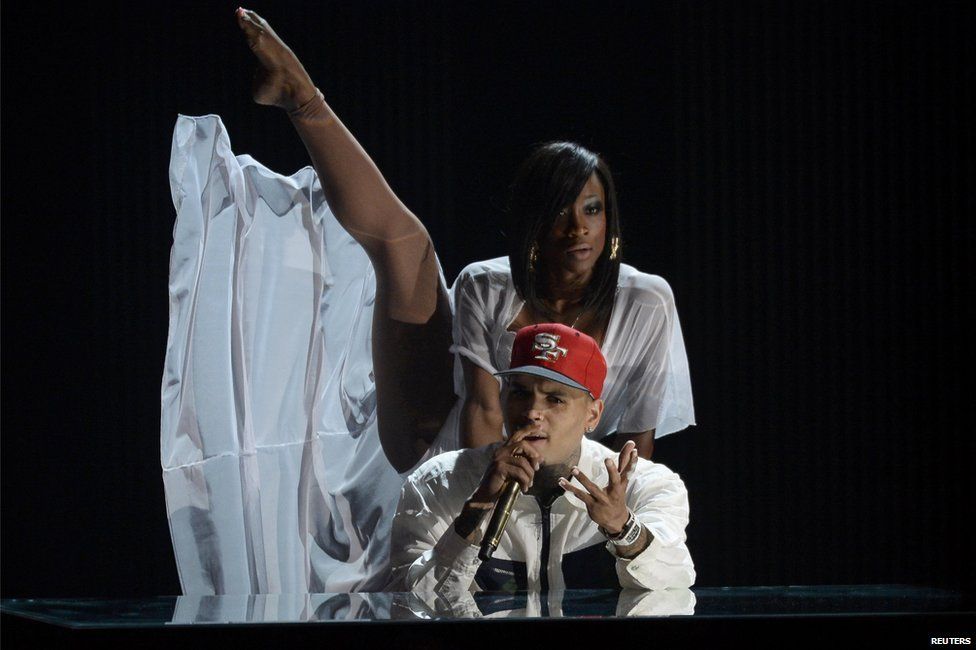 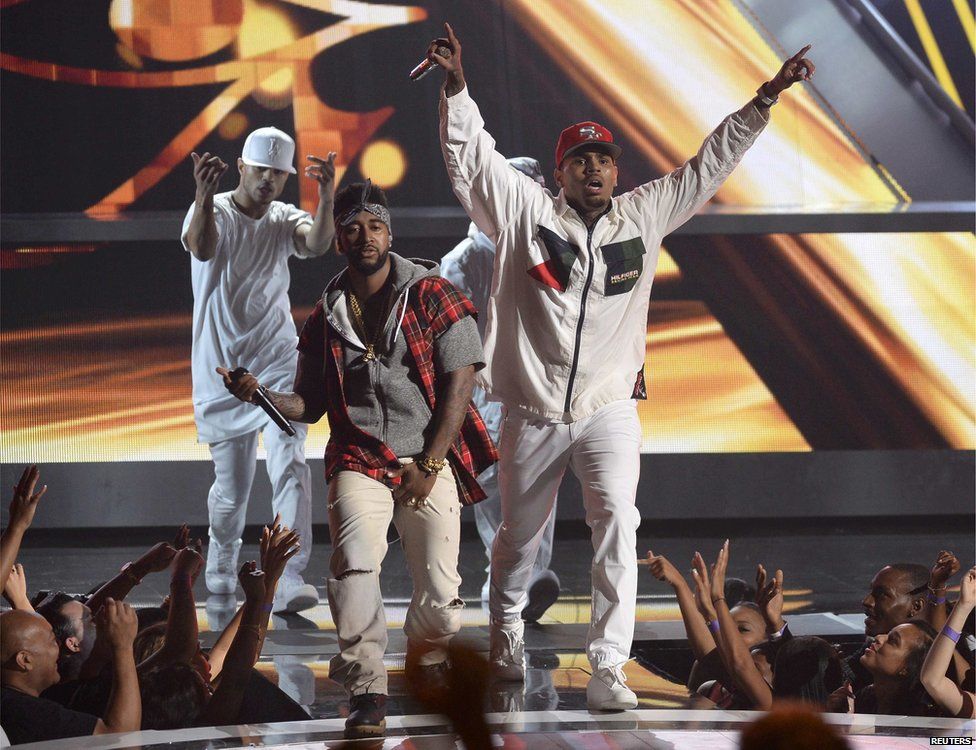 Rihanna was among the A-listers sitting in the audience.

She sang along during Omarion and Chris Brown's performance of the pop hit, Post to Be and premiered a trailer for her new track.

Alicia Keys surprised the audience when she joined The Weeknd to sing his hit, Earned It. 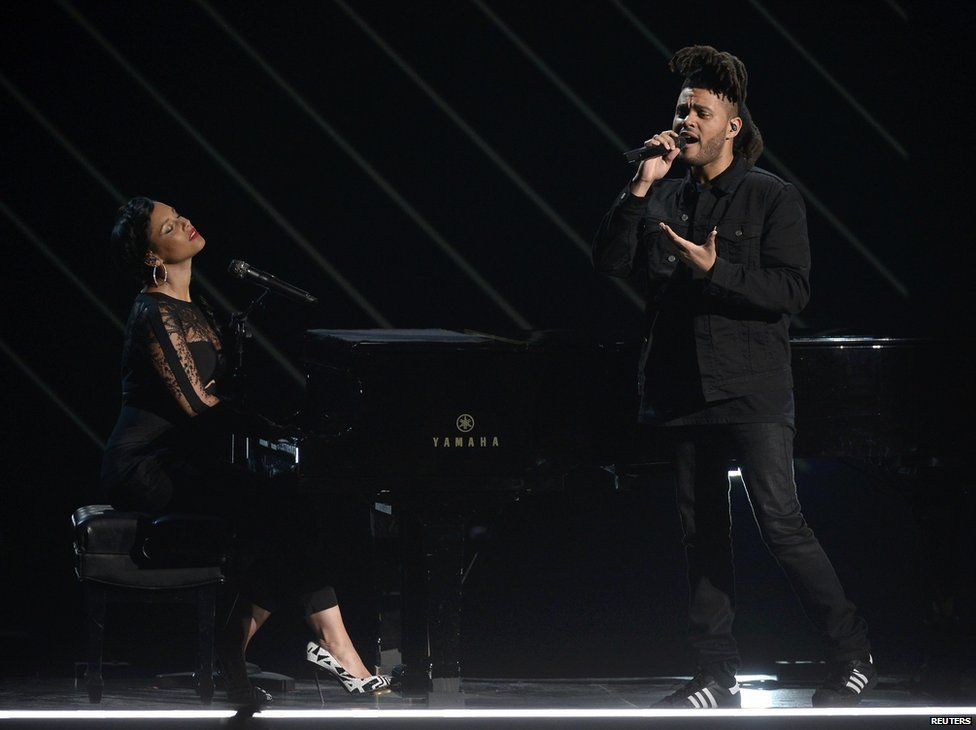 Smokey Robinson received the lifetime achievement award, performed a medley of his hits and got a standing ovation from the audience when he spoke about Hollywood and humility.

Speaking backstage, he said: "For those who are pursuing showbusiness I can say to you, showbusiness is a world of accolades and pedestals and people giving you praise and stuff like that but I say to you, remember where you came from and no matter how high your head is in the clouds, you had better try and keep your feet on the ground.

"Know this is nothing unique to you, you didn't start it and you won't finish it." 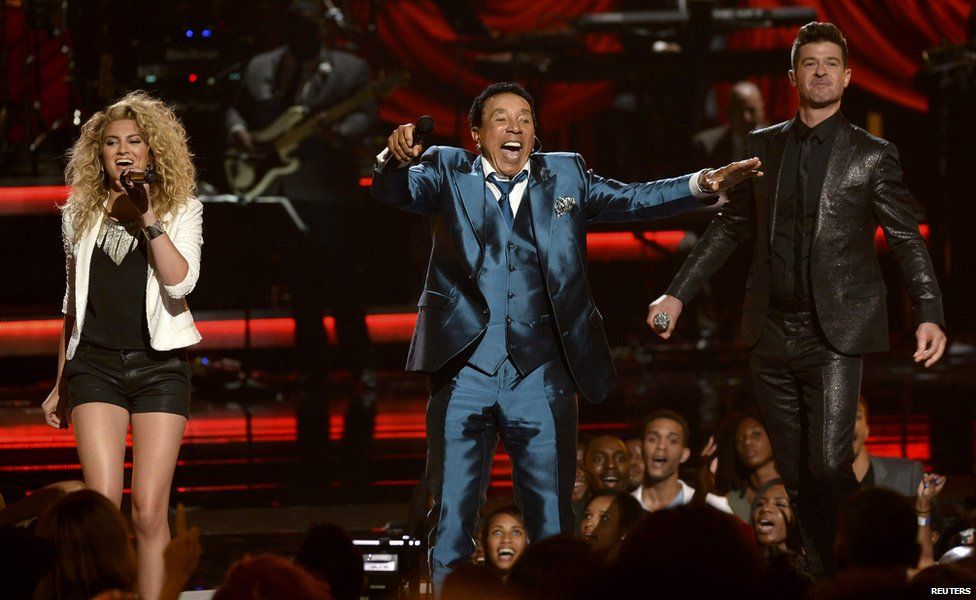 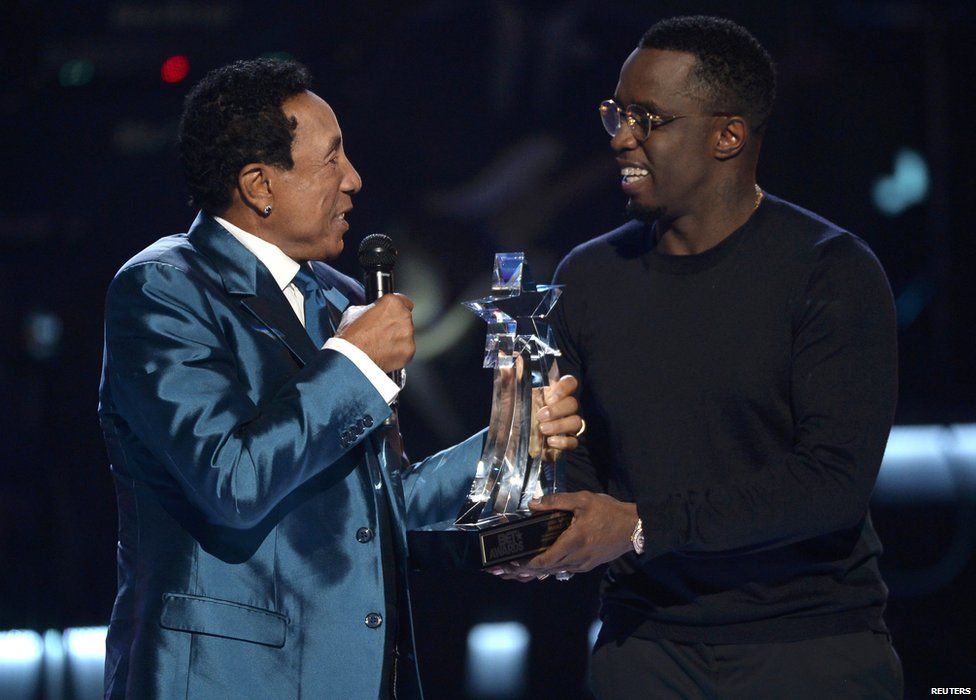 Janelle Monae and Jidenna also brought a serious vibe to the stage when they performed Classic Man.

The singers and their background dancers wore large I'm a Classic Man signs around their necks, a reference to the historic I Am a Man civil rights era protest signs. 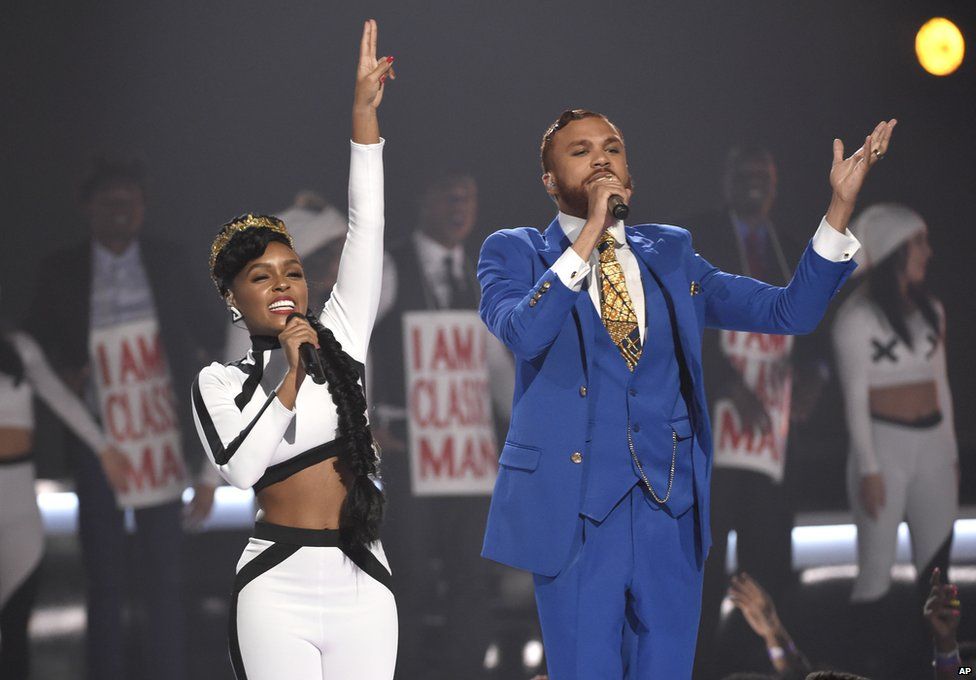 There was also a more serious moment when Anthony Hamilton and Gary Clark Jr performed while photos of celebrities who've died appeared on screen with a montage of the nine people who were killed at a church in Charleston earlier this month. 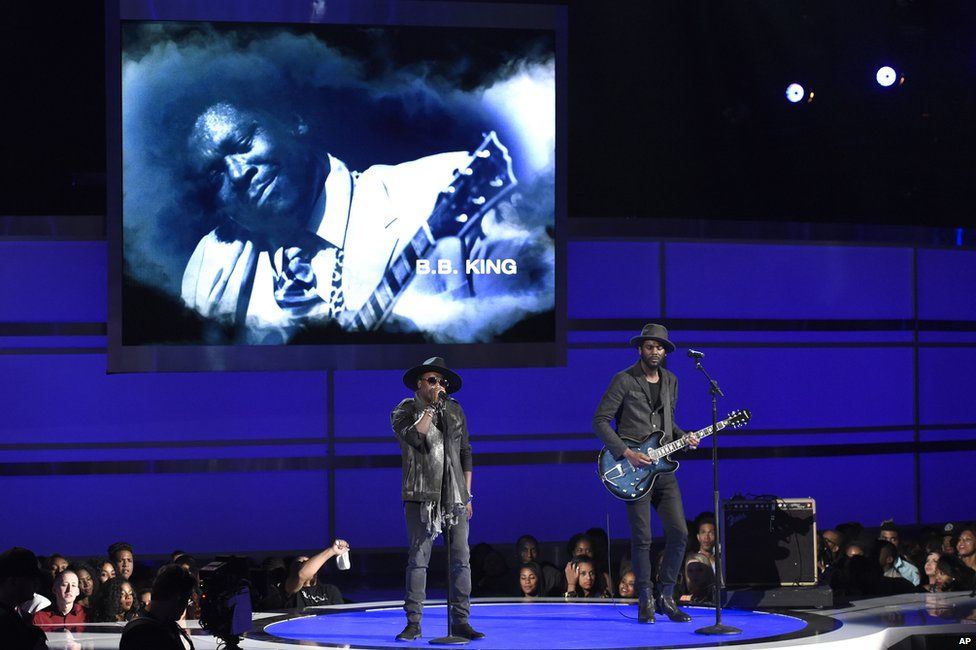 "Is white really the new black?" Anderson sang as two photos of Dolezal - one old, the other recent - appeared on screen. 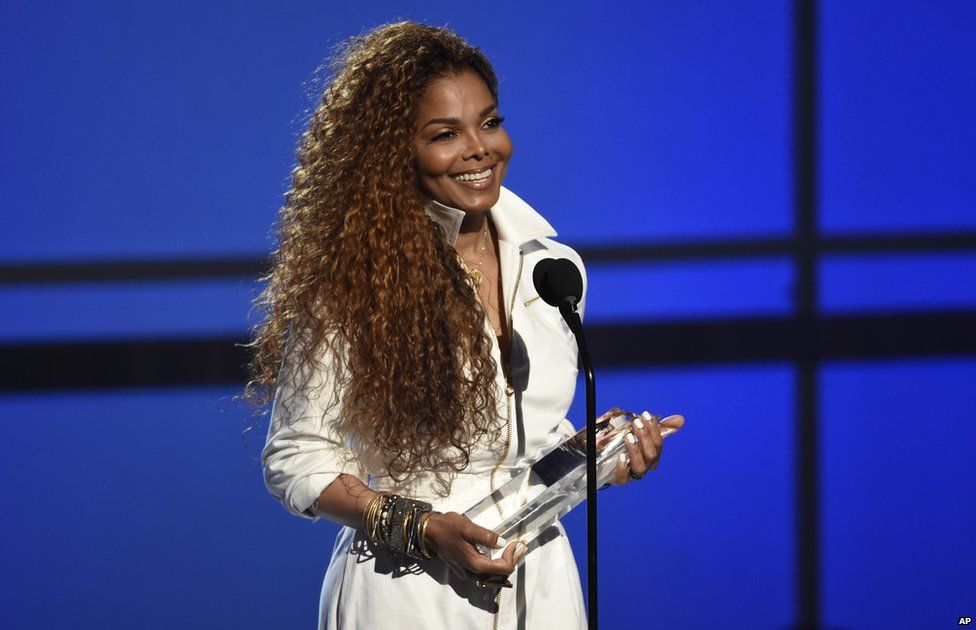 Janet Jackson was honoured with the ultimate icon award as she made a rare public appearance.

She's preparing to release a new album and go out on tour.

"It's been a very long moment to this journey... my heart is so full," Jackson said onstage, where her mother and father sat next to each another. 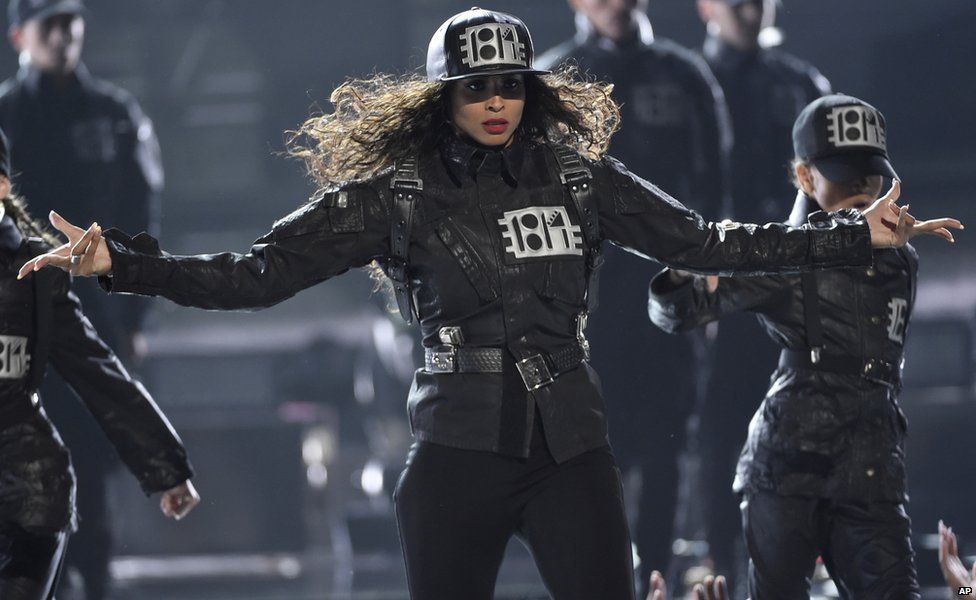 Ciara, Jason Derulo and Tinashe paid tribute to the 49-year-old by mimicking her signature dance moves at the Microsoft Theatre in Los Angeles. 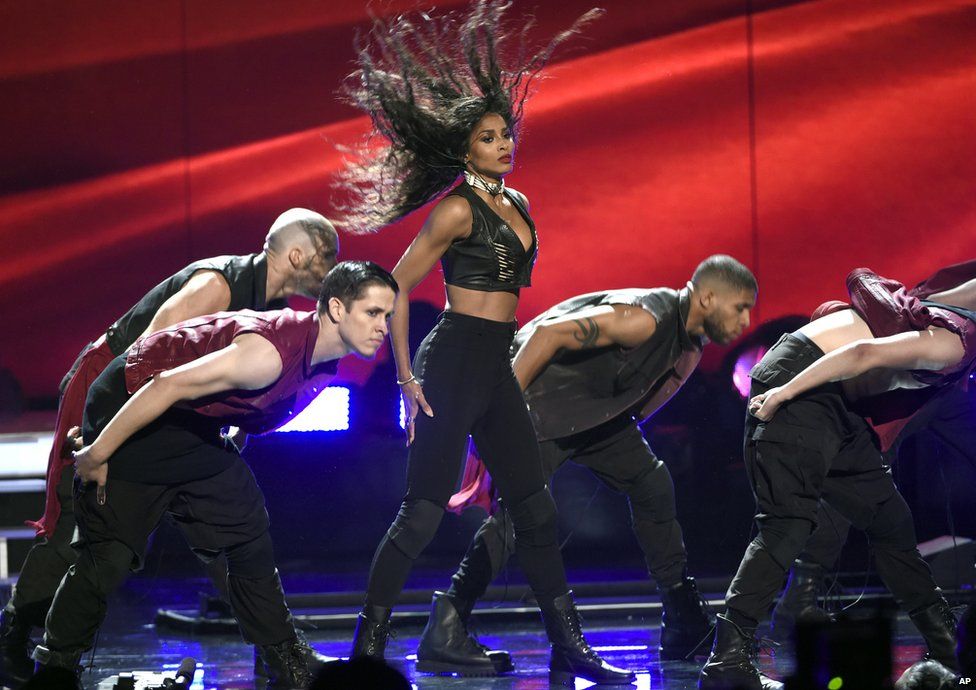 "Twenty five years ago we created Rhythm Nation, hoping the world would be a better place, but today there's even more to be done," said Jackson.

"And last but not least, my loving husband, and to all the fans. I've missed you so much and I love you so much."