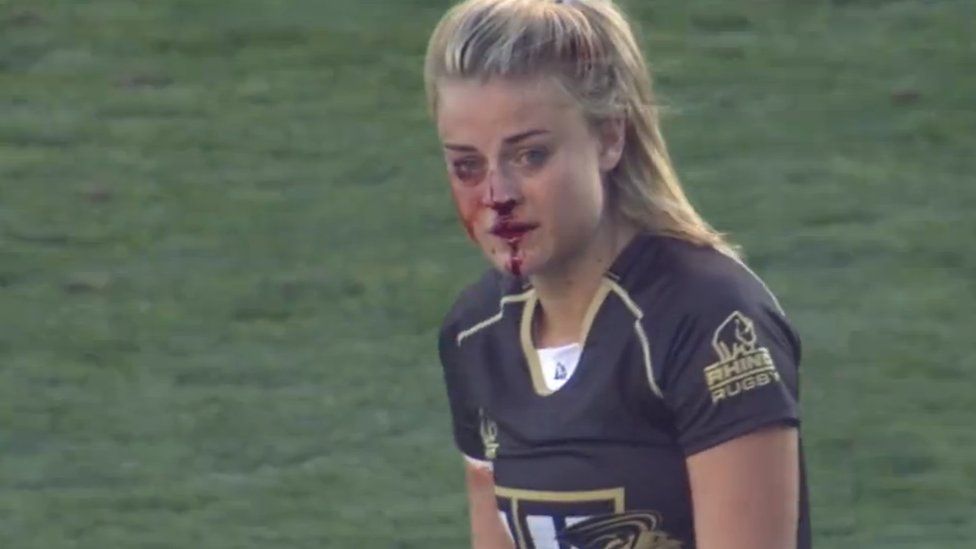 The rugby player who stayed on the pitch, despite breaking her nose during a tackle, has now become an "inspiration".

Georgia Page, who represents Lindenwood University in Missouri, fell and injured her face in a match on Thursday.

She got up, carried on playing and even made another tackle, before being taken off the pitch to get medical treatment.

Page then rejoined the game in the second half.

Videos show Page making a tackle, as well as her bloody nose.

Now she's in the spotlight, she says she's trying to use the attention to promote Rugby Sevens and women's participation.

"I want to be an good ambassador for rugby and growing the game, what [I] did wasn't for me it was for the team!" she tweeted.

She's been given a variety of names by the media, including "war goddess" and "hottie".

"I'm not sure you want the title, makes me laugh every time, pretty sure all women who play rugby are rugby war goddesses," she wrote on Twitter.

Many people have been getting in touch with her on social media to say that she has inspired them and their children to get involved in women's rugby.

There has also been support for a campaign to get more women's games televised, with the hashtag #herrugbycounts.

"Many of you have seen my video on the Internet when it could've been live TV," she wrote.

"Very disappointing that the CRC7s [Collegiate Rugby Championships Sevens] tournament that this happened at did not air that game or our final. Instead [it was the] men's."