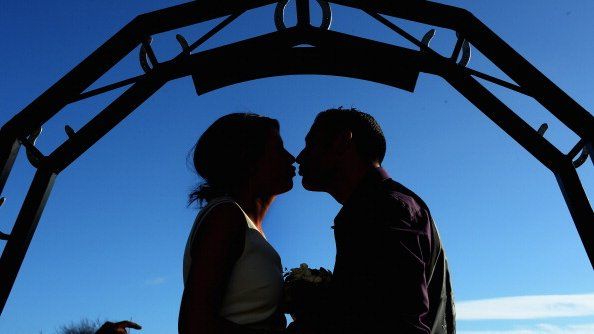 Valentine's Day is traditionally a day of romance.

Since the Middle Ages, 14 February is the date we're encouraged to show our partners even more affection than the other 364 days of the year.

Not in some parts of the world though.

In places like Pakistan, Malaysia and Saudi Arabia, celebrating Valentine's Day with flowers, chocolates or a glass of wine could result in severe punishment. 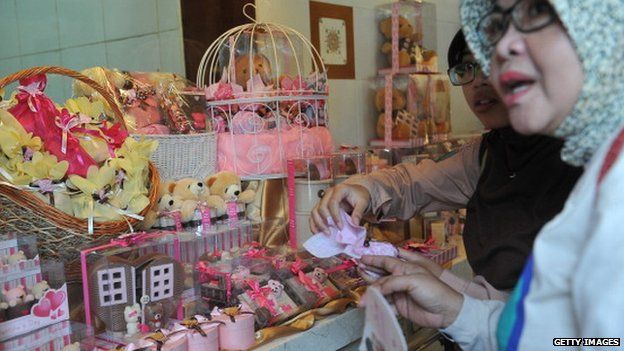 While Valentine's Day is celebrated by many Indonesians, officials and Muslim clerics are less happy about the holiday. 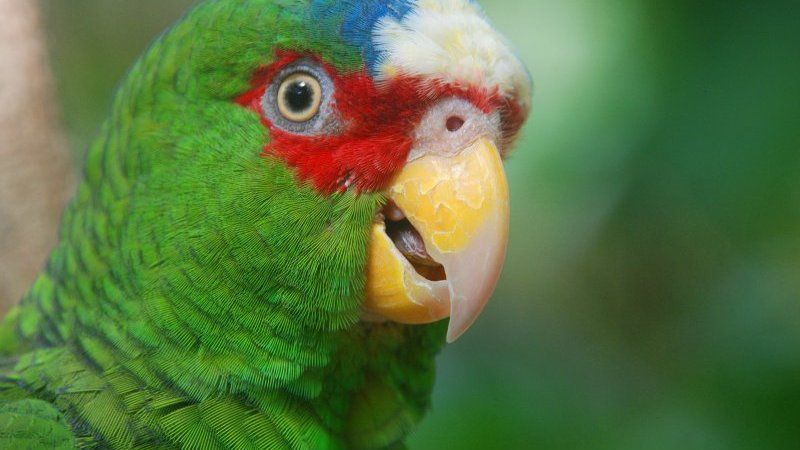 The animals that don't do romance

In recent years there have been protests from conservative Indonesians, saying Valentine's Day is un-Islamic.

They argue it promotes casual sex and the drinking of alcohol. 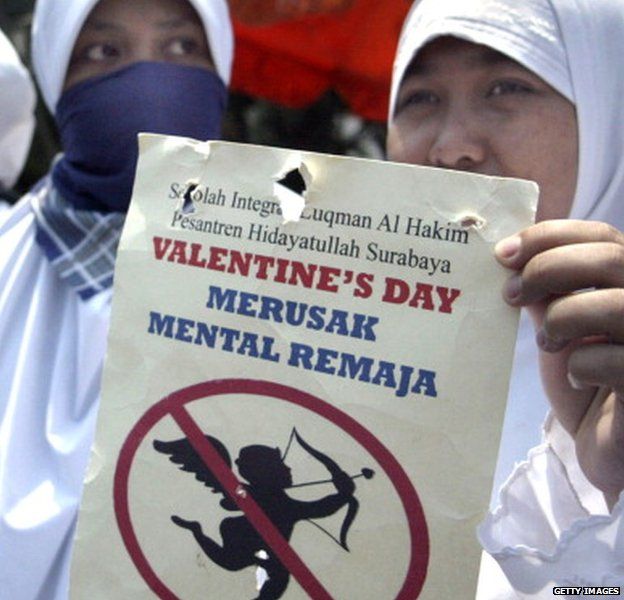 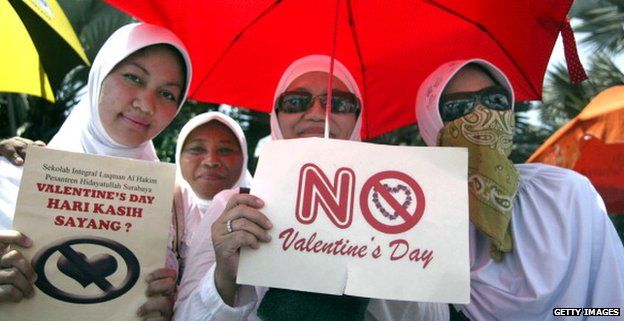 Indonesia has the world's largest Muslim population, but is a secular nation, meaning that the government says it is neutral and neither supports nor disagrees with religion.

However, in the province of Aceh, the only place with Islamic rule, celebrations are banned as is the sale of gifts. 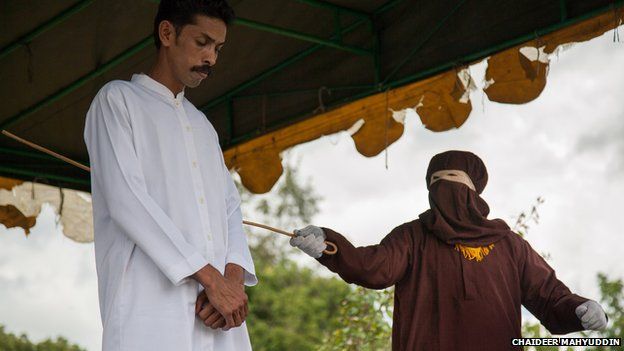 Image caption Aceh is the only place that has Sharia law. Here this man is caned publicly for gambling 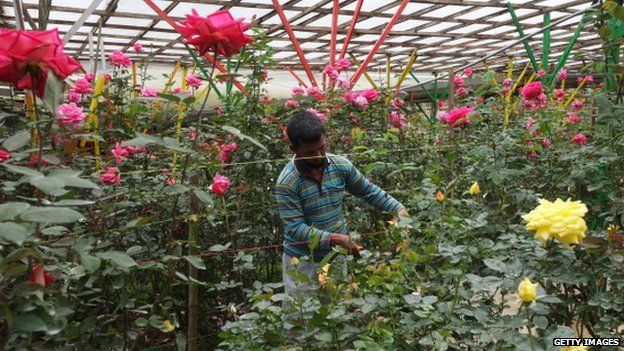 The anti-Valentine's Day campaign by the country's Islamic authorities goes back to a fatwa (religious ruling) issued in 2005.

However, many Malaysians still celebrate the day and other faiths are not affected by the Valentine's Day boycott in the country.

Additionally not all Malaysian Muslims agreed with the campaign, with some saying Valentine's Day is harmless.

Muslims make up nearly two-thirds of the 28 million population. 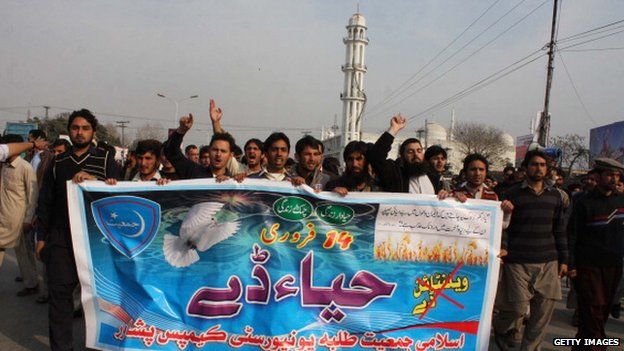 Last year, there were clashes at a university in Peshawar over Valentine's Day.

Liberal students were celebrating with red balloons and cake while another group felt such a show was un-Islamic.

Dozens of students threw rocks in the scuffle, leading to gunshots being fired by both sides and rooms in a student dormitory being set on fire.

Three students were injured and stones were thrown at police.

While giving chocolates and flowers on the 14 February is increasingly popular in Iran, in the past authorities have sought to crack down on celebrations, calling the day a "decedent Western custom".

Despite this restaurants in Tehran reported being fully booked last year and many shops could be seen selling teddy bears and heart-shaped boxes of chocolates.

This was in spite of being threatened with prosecution if they sold traditional Valentine's Day gifts.

According to the Economist, shops simply used lookouts to tell them if inspectors were coming on a Valentine's Day patrol.

In Saudi Arabia, Valentine's Day is banned by the kingdom's religious police.

Women and men sit separately in restaurants and public displays of affection are taboo.

However, some shops continue to sell red roses and other traditional Valentine's presents.

One shop owner described how Valentine's Day orders are placed over the telephone to avoid detection and flowers are hidden in the back of the store.

Last August, the decision to sentence five Saudis to a total of 39 years in prison, as well as 4,500 lashes between them, was upheld.

The men had been found dancing with six women they were unrelated to on Valentine's Day. Alcohol and red roses were also seized. 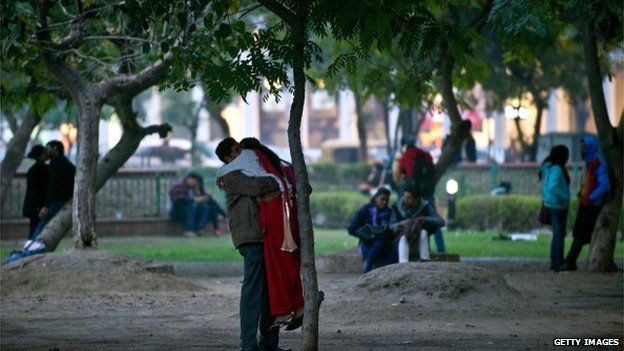 A number of political parties in India have criticised Valentine's day, arguing it promotes Western values and is unwelcome in India.

India used to be part of the British empire until it declared independence on 15 August 1947.

This year the Indian Hindu nationalist party Mahasabha said that they would encourage couples spotted out together on Valentine's Day to get married, and will actually have a religious leader on standby to perform marriages.

Party leader Chandra Prakash Kaushik told The Times of India: "We are not against love, but if a couple is in love then they must get married.

"If the couples claim that they need time to think about marriage, we will tell them that if they are not certain, they should not belittle love by openly going around together. We will also inform their parents."

Other groups have said that celebrating romance would encourage teenage pregnancy and instead pushed for Indians to ditch the idea of romance between boys and girls and replace Valentine's Day with a celebration of the love between parents and children, a 'Parent's Worship Day'.

He has thousands of followers, but was last year charged with the sexual assault of a child.

He also hit headlines in 2012, after saying that the victim of the Delhi gang rape could have escaped if she called her attackers "brothers".