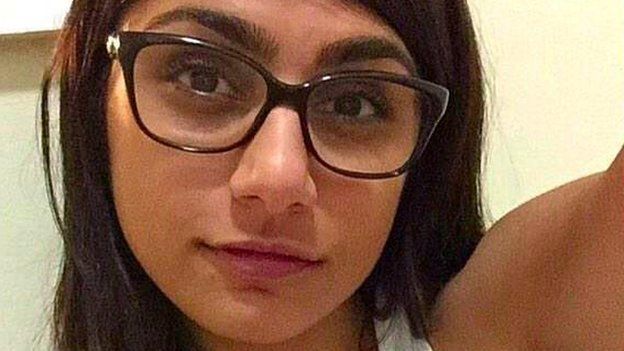 With more than 1.5m views, the 21-year-old, who now lives in Miami, says the messages have become "pretty scary".

Social media users have described her as "unworthy" while others say she does not "represent Lebanon".

That film, uploaded in November, showed her wearing a hijab - the veil worn by many Muslim women.

Whatever we do, South Park has done 10 times worse.
Mia Khalifa

Mia has been sharing some of the more extreme comments - some telling her to kill herself - on her Twitter account.

A PhotoShopped image showed her superimposed onto a figure in an orange jumpsuit, alluding to images of Islamic State extremists threatening hostages.

Speaking on US internet radio programme The URC Show, she said the commentators were taking her films, made with production company Bang Bros, too seriously.

"They just need to understand that anything Bang Bros produces is basically satire," she explained.

"Whatever we do, South Park has done 10 times worse."

Some commentators have claimed she is letting down the Islamic faith with her films.

Although in the controversial video she does wear a hijab, then remove it, she says she is not a Muslim.

"I'm not a practising Catholic but I was raised Catholic," she said.

Lebanon has also often been at the centre of Middle East conflicts, despite its small size, because of its borders with Syria and Israel and the unique make-up of its population.

Many Lebanese people have spoken in defence of Mia and her decision to work in the pornography industry.

Stand-up comedian Nemer Abou Nassar tweeted: "Mia we love you! I hope to high five you soon one day."

Just over a quarter of these originated from Lebanon, with people in Syria and Jordan also searching for her in great numbers.