"Nobody knows who I am, but most of the people in this country have heard me sing."

On 10 January, a seemingly overwhelmed Sam Smith was unveiled as the BBC Sound Of 2014 winner ahead of 14 other acts on the long list.

It's safe to say you know who Sam Smith and his six Grammy nominations are now. And his fellow next-big-things haven't done too badly either.

Twelve months, three number one albums and four BBC Music Award nominations, four Mercury Prize nominations and a cameo as Bob Marley; that's what they've been up to since being named as the "ones to watch" by around 100 music industry experts. 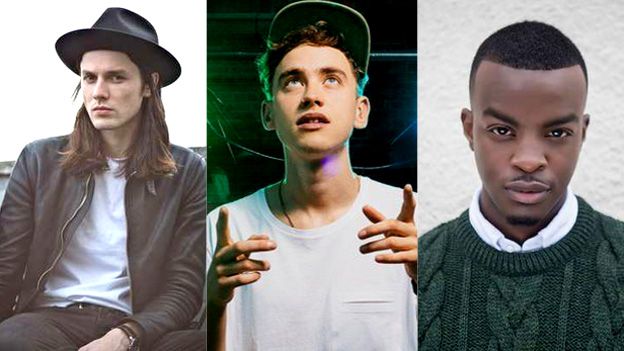 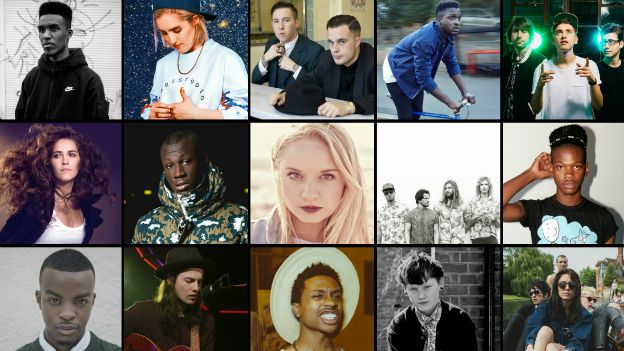 A year before being named third on the Sound of 2014 BANKS, aka Jillian Banks, "was writing in my room, on the floor".

The Californian is one of seven names on this year's list who has gone on to have a top 20 UK album. Goddess went to number 20 in September and stayed in the chart for two weeks.

Following a support slot with The Weeknd last year, 2014 saw BANKS embark on her own headline tour.

Her singles Drowning and Brains were featured on Zane Lowe's hottest record and the singer also took part in Radio 1 Rescores: Drive.

Appearing on the Sound Of was seemingly the start of a pretty special year for Chance the Rapper.

The 21-year-old went on the win "the most important award I will ever win" in November when he was given the outstanding youth of the year award in his native Chicago.

As part of The Social Experiment, he has also appeared on Skrillex's album Recess.

He also moved in with James Blake and was chosen for a cameo role of Bob Marley in animated series Black Dynamite.

Chloe Howl was nominated for Brits Critics' Choice Award alongside with Ella Eyre and Sam Smith.

The 19-year-old has come a long way since her first public performance at the age of about four, which was to her school caretaker.

"I used to sing Annie songs and he used to call me Annie," she told Newsbeat.

This year has seen the singer work on her self-titled debut album, which is set for release in early 2015, support John Newman and Sound of 2009 winner Ellie Goulding on tour and see one of her songs feature on the Kick Ass 2 soundtrack.

Ok, here's some of what Ella Eyre has been up to since coming second on the Sound Of 2014 list: Brits Critics' Choice Award runner up, two top 20 UK singles (If I Go and Comeback), UK headline tour including a Glastonbury slot, US tour with Bastille and a Brit Award for best British single for Waiting All Night with Rudimental.

That doesn't include what she calls her "cherry on top" moment of taking home best newcomer at the Mobos and, of course, helping Olly Murs to officially launch Christmas on Radio 1.

"It's quite surreal to think that it's all happened in one year," she told Newsbeat.

"The whole year has been amazing. I don't think I saw a lot of it coming. It's been a mad year."

However the 21-year-old, who is set to release her debut album in 2015, said that being featured on the list is not a sure-fire route to stardom.

She said: "It's not a guarantee for success at all. But it certainly does help it and it's encouraging, mentally, if anything for the people on the list."

FKA twigs saw her debut album LP1 go to number 16 in the UK in August and is among the four Mercury Prize nominees to emerge from the Sound of 2014 list - a number which hasn't been matched by any of the previous Sound of lists.

The Two Weeks singer has become known for her immersive and theatrical live shows, with her American television debut slot in on Jimmy Fallon in November being described as "memorable" and "haunting."

The performance marked the start of her headline US tour.

Speaking to Newsbeat at the Mercury Prize, the 26-year-old said: "It's so difficult to digest everything. I'm just a girl from Gloucestershire.

"Everything when I was growing up was so small and so quiet, so it's exciting to have it all explode all of a sudden."

Aside from maintaining (unofficially) one the best Twitter accounts in music and having Sir Ian McKellan appear in his video, George Ezra has had a pretty busy year.

The 21-year-old scored a UK number one album, one of three artists from the class of 2014 to do so, with single Budapest and Blame It On Me making the top 10.

His 12-month rise has been charted in a Radio 1 documentary and he'll end the year with a performance at the BBC Music Awards.

Speaking to Nick Grimshaw on the Radio 1 Breakfast show after being announced in the line-up he said: "It's been a crazy year.

Despite being one of the ones-to-watch for 2014, Jungle spent a good chunk of the year without anyone really knowing who they were.

The brains behind the electro-soul collective, Josh Lloyd-Watson and Tom McFarland, kept their faces and names under wraps after the release of The Heat EP.

"People jumped to the conclusion that we were the roller-skaters, which was fine," Josh told the NY Times.

"Not revealing ourselves was an attempt to remove ego from the process. I think people put so much work into their music, and in the media it becomes all about the person, not what they created."

Since pulling back the mask, Jungle have seen their self-titled debut album go to number seven in the UK and get a nomination for the Mercury Prize.

Radio 1 presenter Huw Stephens is on the panel of industry experts who select the Sound Of lists.

He told Newsbeat that although some people are "quick to knock" the poll for making obvious choices, the quality of the acts is always very high.

Talking about the 2014 acts he said: "I think last year's list was really exciting.

"It's always a strong list because you're asking people who live and breathe and work with music, and who know who's got a chance of breaking through.

"It's always a realistic list I think but last year was particularly strong."

Thirty-one year old Kelela was also named as a rising star by the Guardian and Pitchfork at the start of 2014.

During the last 12 months, the Washington-born singer has worked with London based producer Bok Bok, and recently performed during his takeover of Benji B's Radio 1 slot.

She's said that Bank Head, taken from her first mixtape is when "everybody seemed to catch the drift".

Speaking to Newsbeat from a hotel room in India during his recent tour of the country, Luke Sital-Singh said: "I'm still not used to this life.

"This has definitely been the craziest year for me.

"It was a huge boost for me when the list drops and I've been talking about it ever since."

The 26-year-old has completed a 10-date UK tour and supported Robert Plant at this year's iTunes festival, something he says "will always go down as one of the best things I've done in my life".

The singer, who described releasing his debut album The Fire Inside earlier this year as "a day I've been waiting for ever since I started writing some songs 10 years ago" added that there is still a need for the Sound of lists for both fans and artists.

"It's pretty hard, because of how much stuff there is out there, to actually know what to do and I think a lot of people appreciate having someone curate it for them a little bit."

Uzo Emenike, who you'll know better as MNEK, already had a Grammy nomination under his belt when he was named on the Sound of 2014 in the best dance recording category for Need U (100%) with Duke Dumont and A*M*E.

Since then he's played a part in number one single, Gecko by Becky Hill and Oliver Heldens, had a number number four song of his own with Ready For Your Love and has added to his ever-growing list of writing credits - which includes work with Naughty Boy, Gorgon City, Sub Focus, Clean Bandit, Rudimental and Little Mix.

Speaking to Annie Mac, he said he's "loved every second" of seeing his own music grow in a live setting during the year.

Seven years after previous band Portico Quartet's nomination for Knee-deep in the North Sea, the singer-songwriter told Newsbeat that "what are you wearing" was one of his favourite questions of the last twelve months. Was he being sarcastic? He certainly looked well tailored on the red carpet.

First Mind peaked at number 10 in the UK, with Cucurucu entering the singles chart at number 26.

The year has also seen him "flipping out" with excitement after being booked for a slot on Glastonbury's Pyramid Stage as well as play a string of headline shows in the UK and across Europe.

Aside from being the only act on the Sound of 2014 to get a number one album and a Mercury Prize nomination, Royal Blood have had done a pretty good job at making a mark this year.

The duo performed to a packed out John Peel tent at Glastonbury and have been frequently name-dropped as one of the most promising acts in rock music including Dave Grohl describing their debut album as "so encouraging" for the genre.

After being nominated for British artist of the year at the BBC Music awards singer Mike Kerr said: "About a year and a half ago, it felt like a big old foot hit the accelerator."

Drummer Ben Thatcher added: "There have been so many things this year that we've done which we never thought we'd ever do.

After featuring on Drake's Too Much in late 2013 Sampha was named fourth on the list.

His broken-down version of the track went on to virtually broke the blogosphere and features on Young Turks' best of 2014 complication.

The London-based singer performed at Radio 1's Futures Festival in January before going on to appear on five tracks on SBTRKT's top 20 album Wonder Where We Land as well as featuring on Katy B's number one album Little Red.

If two number one singles, a number one UK album, four Mobo awards and two Q Awards weren't enough to sum up the Sound of 2014 winner's year, the 22-year-old was recently nominated for six Grammys - only equalled by Beyonce and Pharrell Williams.

His album, The Lonely Hour, went to number two in the US and everyone's talking about him possibly writing and recording the next James Bond theme.

We could go on but a feature-length interview, Sam Smith: The Sound of 2014, will probably help with explaining the singer's rise to being on the verge of global domination.

You can also read more about his "incredible" and "crazy" year, which also saw him becoming the only artist to score a million-selling album in both the UK and the US in 2014, here.

Say Lou Lou, made up of half-Swedish, half-Australian twin sisters Miranda and Elektra Kilbey, have spent 2014 touring - "a lot".

They've played at festivals all over the world, had their tracks remixed by Foals, toured with London Grammar and haven't even had a chance to put out their debut album.

Miranda told Newsbeat: "It's been a really good year for us - a year of a lot of good experiences."

Elektra added: "We felt like it was a welcoming onto the international music scene."

The girls suggested that being put on the list perhaps came "a bit early on for us" but said that doesn't mean they did gain anything from being there.

"But for us, more than anything, it was a confidence boost, wind in our sails and that a lot of people in the music industry think that we're really good," said Miranda.