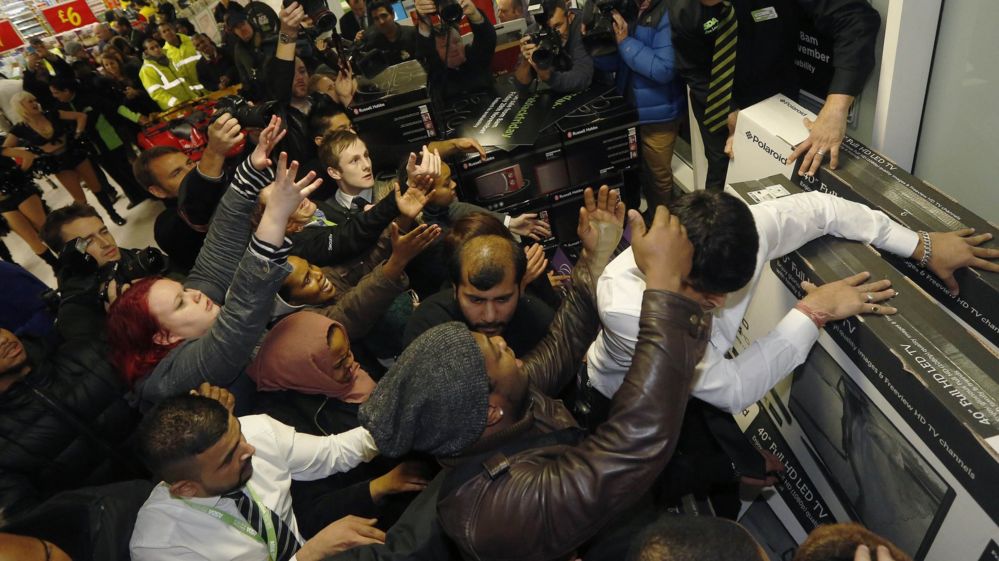 Black Friday - a day that, for most British shoppers, only started in the last couple of years and is symbolised by fights over flat-screen TVs.

First introduced to the UK by Amazon, now a range of retailers such as Tesco, Argos and John Lewis discount prices.

The term first began in the US, where Black Friday follows Thanksgiving on the last Thursday of November.

There are plenty of rumours circulating online about how the day of sales first got its name - but which one is true?

Black slaves were sold at a discount 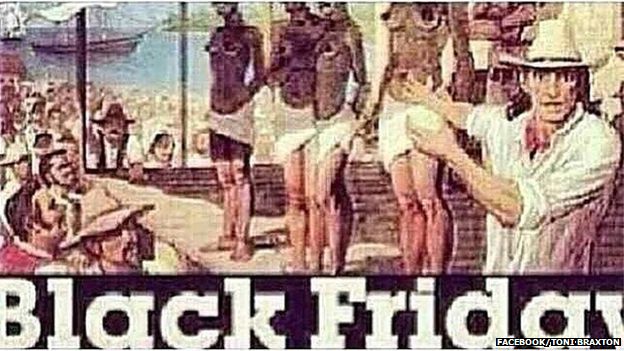 This image has been shared a lot on social media, both this November and in previous years. 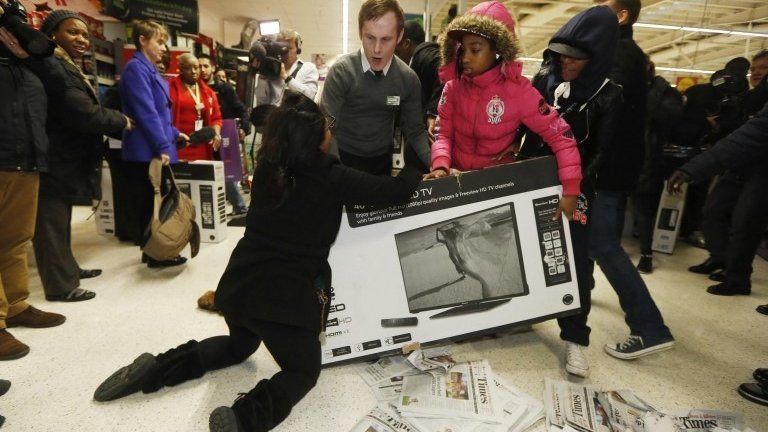 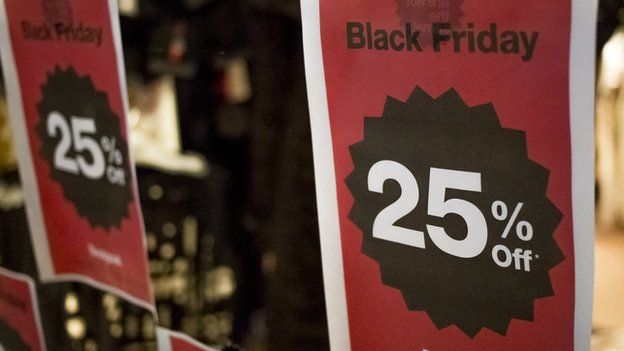 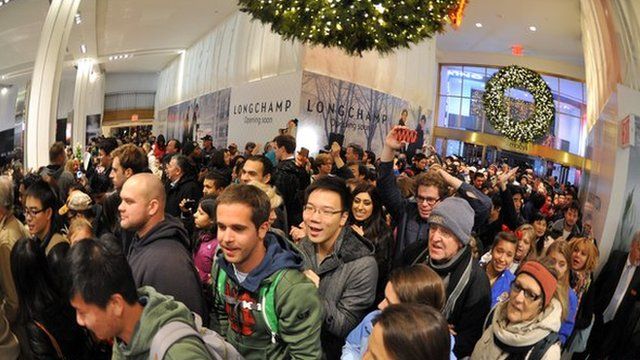 What is Black Friday anyway?

Toni Braxton posted the pictures to her Facebook page, along with the accompanying caption which claims that "slave traders would sell slaves for a discount to assist plantation owners" when they needed extra help to prepare for winter.

The first documented use of the phrase comes a long time after the slave trade was abolished in the US and so it makes it unlikely that the term originated then.

It hasn't stopped people, especially in the US, to call for a boycott of Black Friday, with some citing the recent protests over the Michael Brown shooting as reason not to take part.

Retailers go 'into the black' on Black Friday 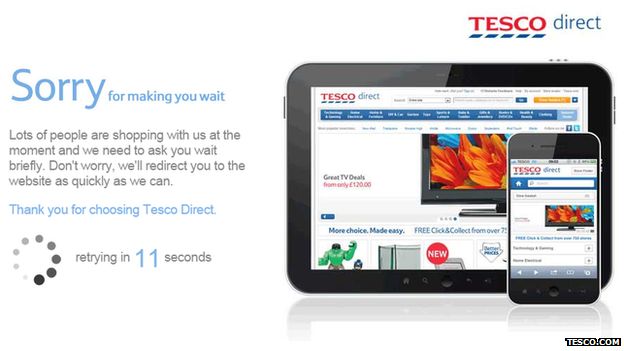 Yes, it is true that both in the UK and the US retailers rely on the Christmas season to make much of their yearly profits - and there are plenty of queues on the high street and waits to access online stores.

But because of the deep discounts offered, it isn't clear how much of that is profit and there is no evidence to suggest this is the day where they go "into the black".

Most retailers in the UK have managed to make the sales to keep in business in all the years preceding the introduction of Black Friday. 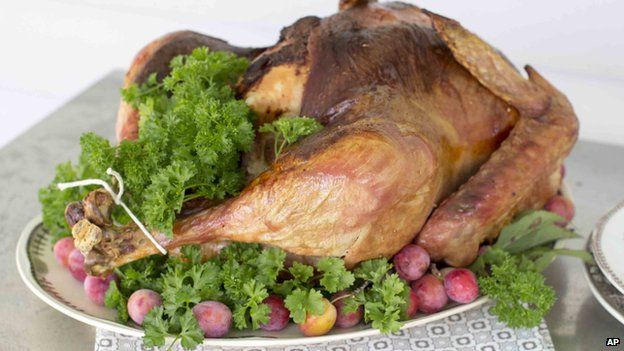 There may be some truth in this rumour, in that there has been shown to be an increase in sickness absences on the day after Thanksgiving.

According to Bonnie Taylor-Blake, a researcher at the University of North Carolina, Factory Management and Maintenance - a labour market newsletter - claims have used the term first to describe a holiday.

In 1951 the circular drew attention to the suspiciously high level of sickness that day.

"'Friday-after-Thanksgiving-itis' is a disease second only to the bubonic plague in its effects. At least that's the feeling of those who have to get production out, when Black Friday comes along. The shop may be half empty, but every absentee was sick - and can prove it," reads the circular.

In this case though, it might be that rather than going shopping, people were feeling unwell after a day of over-consumption.

Rebecca Black, the singer of the viral hit Friday, invented the term 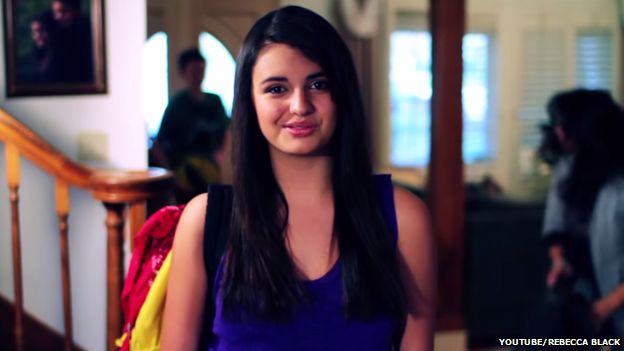 OK, so we just wanted to nip this one in the bud before it even started.

No, it may not be documented that anyone has every been confused by the fact the name of the singer and her song combine to form the term Black Friday.

But just in case, she is not the origin of the phrase, or the day, she just made a catchy tune.

Black Friday was a bad day for police officers in Philadelphia 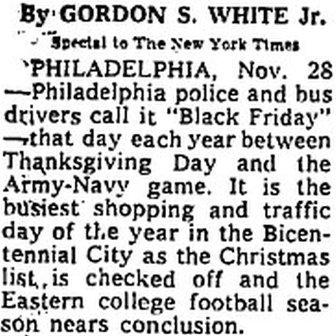 Now, this is the one that is credited for actually starting the term as we know it.

The New York Times report from 1975, above, says Black Friday is slang in Philadelphia.

In a previous article from 1961, references are made to police officers in Philadelphia coining the term as a way to describe the smog and traffic caused by shoppers.

Retailers were said to be unhappy with the phrase and tried to rename it Big Friday. This didn't catch on.