Got iTunes? You got a U2 album. Here's how to delete it. - BBC Newsbeat

Got iTunes? You got a U2 album. Here's how to delete it. 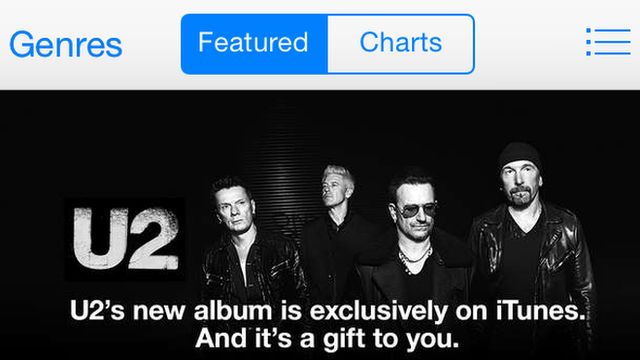 Image caption U2's new album is on your iTunes, like it or not.

Do you own an iTunes account? Congratulations. You also own at least one (quite possibly only one) U2 album.

Apple marked the iPhone 6 launch by slipping a copy of the ageing Irish band's latest album into every account, deliberately infecting gadgets with some people's idea of musical malware.

Think of it as a surprise Christmas present from a relative who doesn't know you very well.

Or knows you really well, if you like U2.

If you DO like U2, great. It's a Beautiful Day* and you'll probably find Songs of Innocence an uplifting collection of soft-rock ballads.

If you don't, you'll probably want to get rid of it, pronto.

The third option is that you don't know you've got it yet, in which case you're in for a massive shock when you stick your phone on shuffle.

So how can you get rid of the offending album if it's driving you to the Edge* of War*?

If you have your computer handy, getting rid of the album is the Sweetest Thing*. Simply sync your phone with your iTunes, go to the music tab, and untick the album.

If you don't, you'll have to go through and delete every track individually, so Get on Your Boots* and get going. 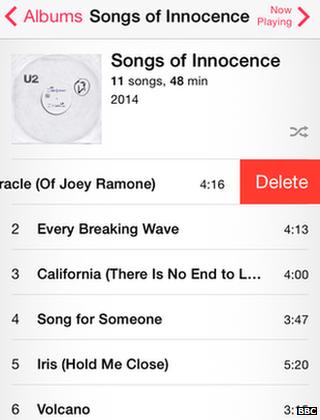 Image caption Are you sure you want to do this?

Go into your music. Select albums. Select Songs of Innocence, then swipe each track left individually to reveal the delete option. There are 12, so this is the gift from Apple that keeps on giving.

It's a nice thought. Having said that, next time you want to give us a present, Apple, we'd rather have a voucher. Or just some cash.

Incidentally, Songs of Innocence is the band's 13th studio album, and their first since 2009. It's out to buy for non-Apple users on October 13.

*These are U2 puns. And we are sorry for them.