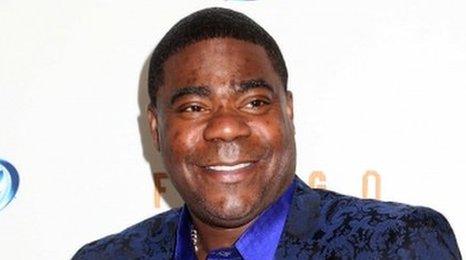 US actor and comedian Tracy Morgan is in intensive care after the limousine bus he was riding was involved in a fatal crash in New Jersey.

Six vehicles were involved, including one carrying the 45-year-old former Saturday Night Live and 30 Rock star.

One passenger died after the bus overturned on the New Jersey Turnpike early on Saturday, police said. Four are in hospital, three remain critical.

A lorry driver is facing criminal charges over the crash.

Kevin Roper, a 35-year-old from Georgia, has been charged with one count of death by auto and four counts of assault by auto, after his lorry allegedly crashed into the bus carrying Morgan and his entourage, causing the multi-vehicle collision.

A spokesman for Tracy Morgan said he was in a critical condition but "receiving excellent care" at a hospital near the crash site.

He had performed a stand-up routine at a hotel and casino in Delaware on Friday night.

He is most famous for his role as Tracy Jordan in the NBC comedy 30 Rock, where he starred alongside Tina Fey and Alec Baldwin.

He played a caricature version of himself on the programme, which focused on the cast and creators of a fictional sketch show loosely based on Saturday Night Live.

In 2009 he was nominated for an Emmy for outstanding supporting actor in a comedy series.

Tracy Morgan joined Saturday Night Live in 1996 and was on the sketch-comedy program for seven years before leaving to star in The Tracy Morgan Show in 2003.