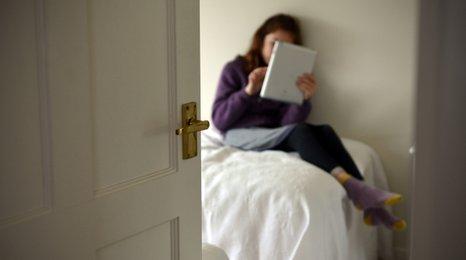 More than nine out of 10 young people expose themselves to the blue light from smartphones and tablets, before bed, causing problems with sleep.

A new survey also shows more than 28m people in the UK regularly get no more than seven hours sleep a night.

Of the 2,149 adults questioned, 78% said they used electronic devices before going to bed.

Getting less than seven hours sleep a night is below the recommended guidelines, and is associated with a range of problems, including an increased risk of weight gain, heart attacks, diabetes and cancer
Prof Richard Wiseman
University of Hertfordshire

"The blue light from these devices suppresses the production of the sleep-inducing hormone melatonin, so it's important to avoid them before bed time," said Prof Richard Wiseman, from the University of Hertfordshire.

Everyone needs different amounts of sleep, but adults are generally thought to require a minimum of seven to eight hours a night.

Teenagers are recommended to get more, about nine hours.

The proportion of people thought to be getting too little sleep had risen by a fifth since a "bedroom poll" conducted last year by the National Sleep Foundation.

"This is a huge rise, and the results are extremely worrying because getting less than seven hours sleep a night is below the recommended guidelines, and is associated with a range of problems, including an increased risk of weight gain, heart attacks, diabetes and cancer," Prof Wiseman said.

The people surveyed were asked if they used a computer, tablet or smartphone in the two hours before bed.

They were also asked about dreams and just one in ten agreed with the statement: "I would describe my dreams as pleasant."

Last week it was revealed opticians were warning that overuse of smartphones may be increasing people's risk of eye damage.

Optician Andy Hepworth said: "Blue violet light is potentially hazardous and toxic to the back of your eyes.

"So over a long period of time it can potentially damage your eyes.

"When you're looking at a smart phone, the light peaking out of that is blue violet."

The news came as a survey of 2,000 people suggests under-25s check their phones 32 times a day.