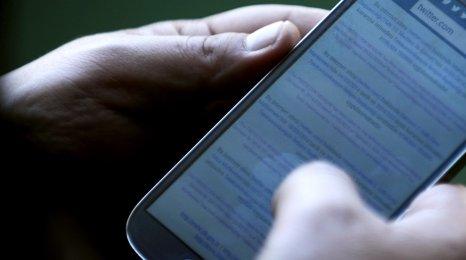 Opticians say people are so addicted to smartphones they may be increasing their risk of eye damage.

They are warning overuse from phones and other devices like computers, tablets, and flat screen TVs can lead to long-term damage.

It comes as a survey of 2,000 people suggests under 25s check their phones thirty-two times a day.

Optician Andy Hepworth said: "Blue violet light is potentially hazardous and toxic to the back of your eyes.

"So over a long period of time it can potentially damage your eyes.

"When you're looking at a smart phone, the light peaking out of that is blue violet."

He says tests have found that over exposure to blue-violet light has the potential to put us at greater risk of macular degeneration, a leading cause of blindness.

Opticians say that, although "good" blue light (blue-turquoise) is needed to help regulate biological clocks, it is also thought that extensive exposure to blue violet light can disrupting sleep patterns and affect moods.

"Although we don't know if there's a direct link with it creating eye problems, there is strong lab evidence it can potentially do that," Andy added.

"It's the combination of not blinking enough and bringing the device closer than you normally look at objects - it strains your eyes."

The survey, commissioned by a group of independent opticians, found that on average, an adult spends nearly seven hours a day staring at a screen with nearly half feeling anxious when away from their phone.

Statistics also suggest 43% of under 25s experience genuine irritation or anxiety when they can't check their phone when they want. 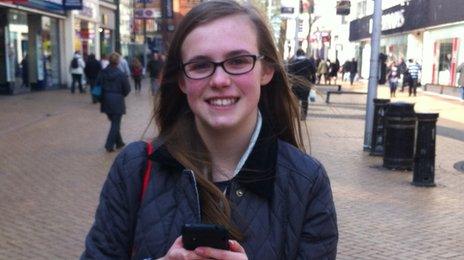 It also found 55% felt the amount of screen time they're exposed to affects them with eye discomfort the main problem.

Eighteen-year-old Alana Chinery from Essex is never without her smart phone.

She said: "I've definitely noticed that my eyes are getting worse from staring at my computer and phone.

"I am getting more headaches."

Amanda Saint, who is also an optician, says the advice is simple.

"Get your eyes tested regularly and take regular breaks from your computer and hand held device."