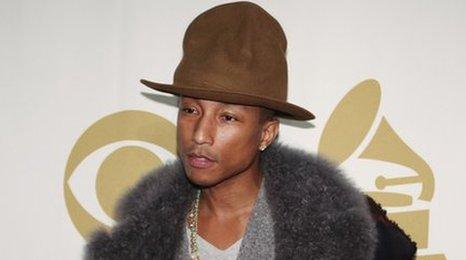 After the auction, the singer tweeted: "Thank you to whoever bought my Grammy hat."

American fast food chain Arby's claimed to have won the hat replying: "You're welcome. We're HAPPY to support a great cause."

The profits of the sale will go to Williams' charity From One Hand To Another, which raises funds for seven to 20-year-olds living in at risk communities throughout America. 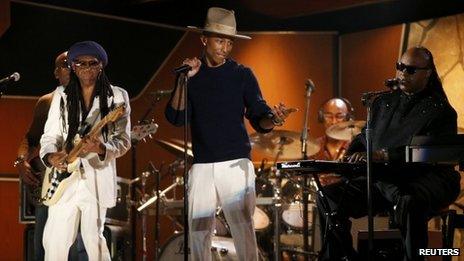 Pharrell performed at the Grammys with Stevie Wonder, Nile Rogers and Daft Punk and also played at the Brit Awards.

The singer's number one single Happy, taken from Despicable Me 2, was nominated for best song at this year's Oscar awards.

This week the single became the singer's third million-selling single in 12 months, following the success of Robin Thicke's Blurred Lines and Get Lucky by Daft Punk.

He is only the second artist after The Beatles to do that.

After returning to number one on Sunday, Happy is only the third single to reach number one on three separate occasions, the last being Guy Mitchell in 1957 with Singing the Blues.

Pharrell's new album, G I R L, is the 40-year-old's second record in eight years and was released on 3 March.