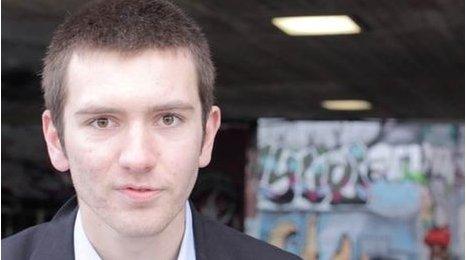 Around a third of pupils say they have no-one to talk to at school when things get tough, according to figures from mental health charity Young Minds.

The report suggests loneliness is the main problem among 15 to 17-year-olds.

Within that age group 35% of males said that when they were stressed in school they had no-one to talk to, compared to 31% of females.

Young Minds is calling for more support for young people and says the situation is a "ticking time bomb".

Aiden, who is 18 and from Croydon, suffered with stress and anxiety when he was working towards his GCSEs two years ago.

"I'd got nose bleeds and shaking hands," he said. "I'd have no-one to talk to, and you didn't want to talk to anyone about it.

"That's how it felt, just all alone and horrible.

"It sort of felt like I was trapped in my own body. I wouldn't be able to speak to anyone about it because I didn't think anyone would care or listen."

Video caption Tips on dealing with signs of stress

In the East Midlands nearly half of students admitted they'd felt alone, while in north-west England 72% said they did have someone they could turn to.

Jude Joughin, a psychologist at Cedar Mount Academy in Manchester, says children at her school get any help they need.

"The pupils here have so much more readily available quick and accessible support," she said.

"Also schools up here, especially within the Bright Futures Educational Trust, have brought in their own counsellors. I do think there's a very happy culture up north." 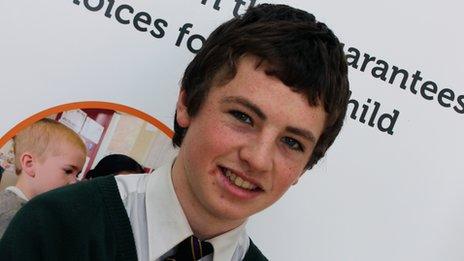 Kane is a pupil at the school and says he felt like he could turn to Jude for help.

"I get angry so easily and I had to calm down after people died in my past," he said.

"I don't need to ask for help off Jude, she's just always there. She's really nice and I know I can trust her. It's all about trust in life."

"Problems become entrenched and those young people end up as adults with long-term mental health problems," she said.

"[They] will end up in and out of hospital using a lot of support services which cost the country a fortune, so it doesn't make sense.

"If the problem's not sorted out we will have thousands more children and young people who are suffering. It's a time bomb."

The Department for Education in England says it is investing millions of pounds in services and it is up to teachers to address any issues with pupils.

In Scotland each school, college or university has a responsibility to provide mental health services.

In Northern Ireland all students older than 11 are meant to have access to a counsellor.

Young Minds surveyed 2,000 young people in education aged 11 to 25 across the UK.