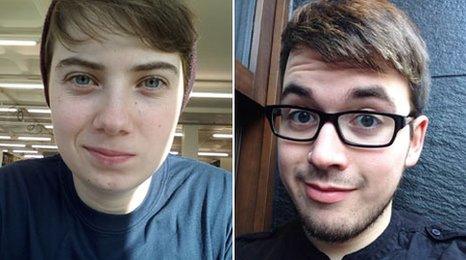 Young lesbian, gay, bisexual and transgender people (LGBT) are more likely to suffer from suicidal thoughts than their straight friends, according to a new survey titled Youth Chances.

The LGBT support charity Metro, asked 7,000 16 to 24-year-olds across the UK about their experiences.

The results suggested rates of self-harm were also higher in young LGBT people and that they were more likely to need help with depression and anxiety than heterosexual people of the same age.

Of those who responded, 6,514 were LGBT or questioning, 956 were transgender and 612 heterosexual and non-trans.

The latest available figures from the NHS date back to 2007. They suggested 12% of LGBT (or questioning) young people reported self harming, which is significantly less than Metro's figure.

The charity also says 44% of LGBT young people have thought about suicide, compared to the NHS's figure of 21%.

It didn't solve anything and if I'd died I wouldn't be doing everything I enjoy now
Aaron, 18
Liverpool

Aaron is 18 from Liverpool. He told Newsbeat how he threw himself in front of a car when he was 14.

"I was trying to come to terms with my sexuality. I broke both my legs and was in a wheelchair for six months," he said.

He says he'd had a row with his dad about being gay.

"It didn't solve anything and if I'd died I wouldn't be doing everything I enjoy now."

Taz, 19, studies in Bradford. She came out to her family and school friends when she was 14.

We can and must act to ensure that LGBTQ young people are afforded the same life chances as their peers
Dr Greg Ussher
Acting CEO, Metro

"There was a mix of direct bullying and rumours," she said.

"I'd made friends with someone who wasn't in my year group. There were rumours that we were in a relationship.

"We weren't together but it spread around the school in a matter of days and it hurt a lot.

"I thought it was unfair I should have to suffer, because [straight] people were getting in relationships all the time which no one cares about."

"The effort you have to go to to seek out help, in some cases, can be off putting."

Dr Greg Ussher is Acting CEO of Metro. He said: "We should all be deeply concerned about the crisis in LGBTQ young people's mental health and wellbeing."

He says the survey responses should be "a wake up call".