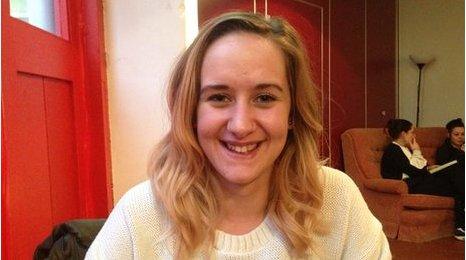 Several leading charities are warning not enough is being done to spot the early signs of mental health problems in young people.

Organisations including Rethink Mental Illness, the Mental Health Foundation and Sane say lives are being put at risk.

They want more training for people like teachers and GPs.

They also say it is crucial to raise awareness among parents and teenagers to know what signs to look out for.

People not going to school or failing to turn up at work are all possible indicators of mental health problems.

These are symptoms Sophie Dennis from Bristol can relate to.

The 22-year-old says she began to suffer mental health problems including paranoia, delusions and obsessive compulsive disorder (OCD) during her mid-teens.

She says she didn't get any effective treatment until she was 20, in part because the symptoms weren't spotted early enough.

"Self harming once led me to have to go to hospital and that [had] a big impact on my family as well," she said.

"That's something that made me feel quite guilty about, what I put other people through.

She also thinks everyone who comes into contact with children should know more about what signs to look for.

"I think they [teachers] have a really tough job and they don't always get the right support," she said.

"They're asked to do an incredibly important and difficult job without the right tools [but] you can buy in support form a range of organisations."

It is not just teachers though that charities say need help in learning to spot symptoms of possible mental health disorders.

Parents, GPs, friends and anyone who comes into contact with children are being urged by charities to know what to look for.

Rachel Hobbs, from charity Rethink, said: "All the evidence shows that the sooner a mental health problem is diagnosed and treated the less likely it is to go on to develop to become more problematic in later life and the more chance you have of a full recovery.

"A lot of people don't realise mental health problems are completely treatable and you can recover. The earlier you spot it the more likely that is to happen."

Mei, 23, suffered from depression when she was at university but was fortunate that her mental health problems were spotted early.

With help from one of her tutors she managed to get treatment.