Romanian migrants 'want to work' after moving to UK

It's just under a month until working restrictions are lifted for Romanian and Bulgarian migrants.

From 1 January 2014 they will be able to work freely across Europe in countries like the UK, Spain and Germany.

Prime Minister David Cameron wants to make it harder for EU immigrants to claim some benefits.

The government hasn't released estimates for how many Romanians and Bulgarians may move to Britain.

If people are coming over, it's more people going through hospitals, more schools being filled and it seems as though it could be a big strain
Jade Worrall

Student Jade Worrall travelled to Romania to find out more about life there.

In pictures: See more photos from Jade's trip to Romania

The 20-year-old from Preston, who studies in Bradford, has concerns.

Jade says she is worried about competition for jobs in future and says she's seen places "change drastically" as more foreign people have moved in.

"I'm not out to cause offence and I'm not a racist person," she says.

"I walked from my flat into the town centre - a 10-minute walk - and I didn't hear one English conversation.

"If people are coming over, it's more people going through hospitals, more schools being filled and it seems as though it could be a big strain." 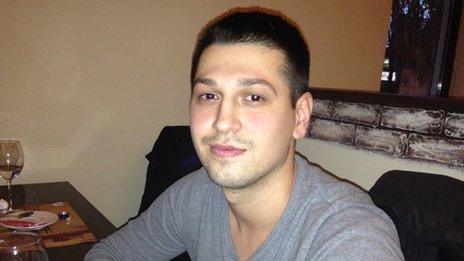 Cosmin Toma, 24, plans to move to his aunt's home in Bristol to start looking for IT work.

A similar job in his home town of Focsani would pay around £150 per month, if he could get one.

He says he would probably leave the UK if he couldn't find work but would accept a lesser job "to start with".

He adds: "I know at the beginning it will be very hard. Benefits? No. I don't want to stay at home and lay in bed. It's not for me.

"I know the worries but I think the media exaggerate a little bit. We are not going to raid England."

For other Romanians, leaving remains a dream rather than a definite plan. 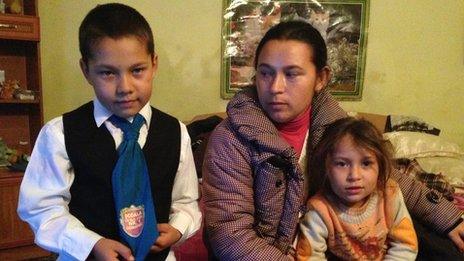 Jade met some of them in the town of Cernavoda, about two hours' drive east of Bucharest.

It is an area of extreme poverty, where many homes are nothing more than shacks and there are open sewers in some streets.

Some here feel prostitution is the only way to make good money.

Jade met a teenager living in a flat with no heating or electricity and a family of four sharing one damp room in a disused mental hospital.

Mum Alina Murgu, 25, says she and her husband's lack of education makes it impossible to look for work elsewhere.

She says: "I can understand why people would want to leave, but there's no reason for people in the UK to be worried. If you could go from here, why wouldn't you do it?" 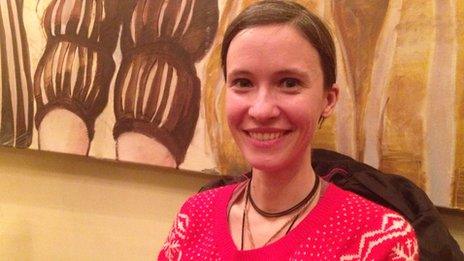 Image caption Alexandra, 27, has studied in Sheffield and hopes to return one day

Back in Bucharest, 27-year-old Alexandra Ion has studied in Sheffield and hopes to return one day, but believes she'd always end up back in Romania.

She thinks the press coverage has been unfair and says Spain and Italy are more realistic destinations for low-skilled Romanian migrants.

"It's a matter of environment," she says.

"Being a Latin country we need to be with people who have the same personality and temperament."

Claudio Dumitrescu is 21 and studying in Bucharest but says he'd consider a move to the UK, Germany or Italy. 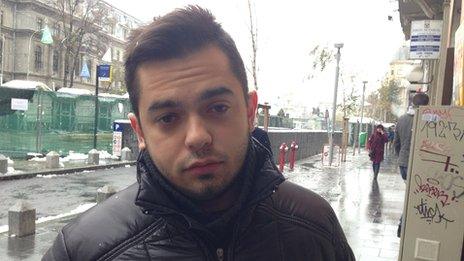 Image caption Student Claudio, 21, says he would consider a move away from Romania

He says he and his friends would accept any job in Britain but denies they would exploit the benefit system.

"Romanian people are very angry when they hear that," he says.

I still think there's a problem with integration in the UK, but I feel like I understand better why people are coming here
Jade Worrall

Jade asks Claudio if he's considered the impact of immigration on British workers, to which he says, 'No.'

She admits being "overwhelmed" by the level of poverty in places like Cernavoda.

"We saw people rummaging through dumps and the way that people were living among pigs," she admits. "It was just awful.

"I don't think anyone should have to live in those conditions."

She admits that if she was a young Romanian, she might look to leave too.

"I do genuinely think the people are going to come to work and aren't going to scrounge," she says.

"I still think there's a problem with integration in the UK, but I feel like I understand better why people are coming here."