Laser tattoo removal is on the rise, say skin experts

Some of the UK's top skin specialists say they are carrying out more laser tattoo removals than ever before.

They've told Newsbeat it means they are also seeing an increasing number of people with burns and scars caused by untrained practitioners.

The British Medical Laser Association (BMLA) and the British Association of Aesthetic Plastic Surgeons (Baaps) are both calling for tighter regulation of the industry with new rules on who can buy and use lasers.

At Ninewells Hospital in Dundee a grey, shiny laser machine is whirring in the corner.

Over a bed, a metal arm reaches across a patient's chest.

A dot of red light shoots out of its pen-like tip and hovers on 22-year-old John's tattooed skin. 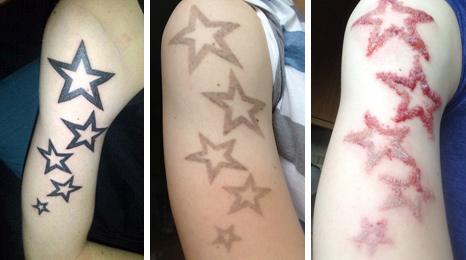 He is getting ready for laser removal treatment.

"When I was 16 years old I got about 10 of them," he says. "There are swastikas and Nazi symbols on my back, shoulders, arms, wrists."

John says six years on he's changed his views and that the Nazi tattoos have ruined his life.

He's getting them removed on the NHS, which is rare and only happens if they're causing severe psychological distress.

"When you see these on your body, you're set as being that person, it's like wearing a badge," he says.

"I want to move on in life. If I got them removed I'd be able to change my image."

To some John's case might seem extreme, but he's not the only one who wishes they'd thought twice about getting inked.

Recent statistics from the British Association of Dermatologists (BAD) suggest a third of people with tattoos regret them.

Twenty-two-year-old Chad, from Cardiff, wants to get rid of a sleeve of stars on one arm and his daughter's name on the other.

The laser treatment was going well until his 11th session, when he had a severe skin reaction.

"It was pretty nasty," he says. "My whole arm was blistered. I couldn't see any black ink, it was all completely red. The top star had a huge blister on it which was probably the size of my thumb."

Prof Harry Moseley, head of the BMLA, says it's more normal to have a small amount of pin-prick bleeding and redness.

He thinks the popularity of laser removal is partly down to an increase in the number of people getting inked in the first place.

"More people are getting tattoos and more people than ever want them removed," he says. "Lasers can be very dangerous. There can be blisters, burning and if a laser hits the eye, blindness."

The use of lasers for cosmetic purposes was de-regulated in England by the government in 2010, which means anyone can use them.

There has never been regulation in Scotland while in Wales and Northern Ireland laser operators must register with a healthcare authority.

But the deregulation has led to a boom in the industry with many high street beauticians and tattoo studios offering it as well as online sites and voucher deals. 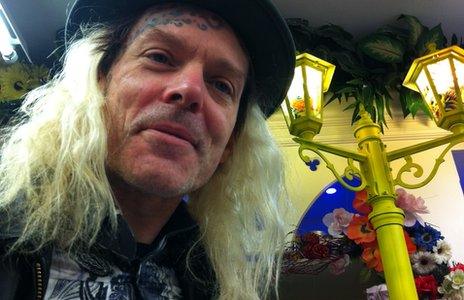 "The fact that there's no regulation means there are going to be an awful lot of people out there who don't know what they're doing with the laser," says Woody, a tattoo artist.

"Certainly if you're having lasering done ask about training, maintenance of the machine and check that you're wearing the correct goggles."

The Department of Health says there are no plans for rules on lasers as tattoo removal doesn't "pose a significant risk to health".

They say there are already safety guidelines for the use of cosmetic lasers and that "staff should be well trained in their use".