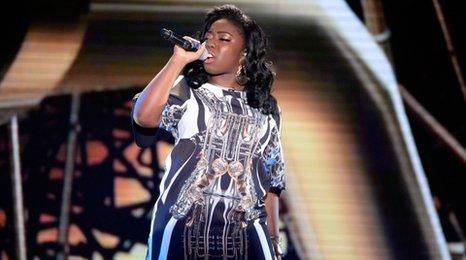 X Factor contestant Hannah Barrett has revealed that she's been getting racist abuse since appearing on the show.

The singer, 17, who is one of six remaining finalists on the ITV series, said that she had been taunted on Twitter because of her skin colour.

She's told Reveal magazine: "I've received a lot of horrible, racist comments on Twitter. People say I'm too dark to be a singer.

"People say, 'You're black and ugly' and nasty things like that."

She added: "The sad thing is that most of them are made by black people who just have lighter skin than me."

The X Factor hopeful said that she did not let the comments get her down and that she felt lucky.

"I'm just like, 'Whatever.' I know they are talking rubbish," she said.

"This time last year I was working in Greggs, going to college and living by myself.

"Now I'm living in a £5 million house with amazing people, going to photo shoots and interviews and singing at the weekend. I feel blessed."

Hannah Barrett is one of two singers left in Nicole Scherzinger's girls category along with Tamera Foster.