CAB: More than 80,000 used car complaints in past year

The Citizens Advice Bureau (CAB) dealt with more than 80,000 complaints about used cars in the last year.

It's the first time they have collected information about car complaints.

Most issues relate to cars going wrong within the first month of being bought.

People are being advised to make better checks before handing over money. Complaints about second hand cars are now the most common issue the CAB is asked to help with.

I haven't got a lot of money anyway and I put it in good faith that they wouldn't rip me off and then just wash their hands of me
Lyndsey Eggison,
Sociology University Student, Nuneaton

The Citizens Advice Bureau took more than 70,000 calls and email complaints about faulty second hand cars from October 2012 to September 2013.

Another 14,000 were made by people walking into the bureaus themselves.

Most of the complaints relate to independent garages and private sales.

CAB believe that in four out of five complaints, cars needed essential repairs to fix things like smoke emerging from the engine and corroded break pipes.

A car has to be roadworthy, and, even if it has an MoT certificate, if the brakes and steering aren't fit for the road it's a criminal offence to sell it on.

Also, advisers say if people buy from a bigger company it may cost more but they're likely to have more protection than from an independent garage.

Sales of new cars have been growing in the UK but industry figures suggest used cars still outsell new models by three to one.

'Put good faith in them'

Lyndsey Eggison is in her fourth year at Warwick University.

She spent £1,600 on a second hand car from her local garage which soon began stopping in the middle of the road. 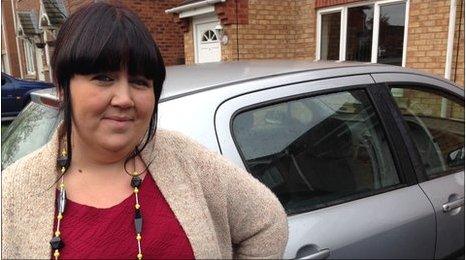 "I checked the MoT I checked the tax, I looked at the mileage. I don't know a lot about cars but I did the basics.

"When you go out driving you get a feel for it and it felt fine."

The car now sits on her drive and has no insurance or road tax. She feels let down and wishes she'd known more about what to look for.

Too many consumers end up footing the bill when their car needs repairs or, worse still, ends up on the scrap heap just weeks after purchase
Jo Swinson
Consumer Minister

"I haven't got a lot of money anyway and I put it in good faith that they wouldn't rip me off and then just wash their hands of me," she said.

The Government are backing a campaign for consumer checks.

"Too many consumers end up footing the bill when their car needs repairs or, worse still, ends up on the scrap heap just weeks after purchase."