Thousands of young people are in danger of being trapped in a lifetime of unemployment, a charity is warning.

The Prince's Trust is calling for urgent action from the government to help tackle the problem.

Latest figures from the Office for National Statistics show 115,000 18 to 24-year-olds have been unemployed for longer than two years.

The government says it has hugely increased the number of work experience placements and apprenticeships.

Why is youth unemployment so high?

The figures on long-term, youth unemployment have more than quadrupled in the last decade.

The Prince's Trust says if nothing is done, the UK could be on the brink of a youth jobs crisis.

Sean Pearson, 25, from Sunderland, was unemployed for six years and had to rely on jobseeker's allowance and help from his mum to get by.

He says it was not just a lack of money which affected him during his years looking for a job.

"I stayed in the house all the time. I lost touch with my friends and the days started blending into weeks, then into months and then into years," he admits.

"I felt like I was letting not only myself down but also my family."

Things changed for Sean two months ago when he was helped by youth charity The Prince's Trust.

It runs Make Your Mark, a vocational training course, with help from employers like Marks and Spencer.

After a four-week placement with the High Street store, managers offered him a job at their branch in the Metrocentre in Gateshead. 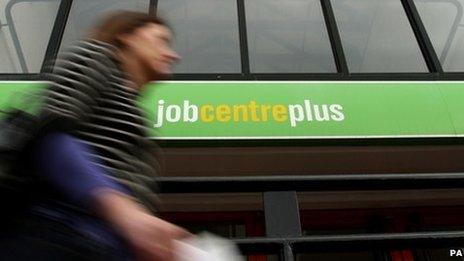 He says getting work has allowed him to help his mother by paying for bills and inspiring other family members.

"I've shown my brothers the right path in life to take, shown them that with hard work you can accomplish anything you want," he says.

"It's been like a weight lifted off our shoulders," he adds.

Paul Brown, a director at The Prince's Trust, says young, long-term unemployed people need specialist help to try to get them back into the workplace.

He says: "We believe those young people need and deserve long-term support, otherwise we think we're on the brink of a long-term, youth jobs crisis.

"I've seen time after time, even young people who've been out of work for many years, turn their life around. That has to be worth it for them and for the economy as a whole."

I've shown my brothers the right path in life to take, shown them that with hard work you can accomplish anything you want
Sean Pearson

Economists suggest there are several possible reasons why the numbers are so high at the moment.

Prof John van Reenan, director of the Centre for Economic Performance at the London School of Economics, says youth unemployment could affect the whole economy.

"What happens is that young people who stay unemployed for a long period of time - it scars them," he says.

"They're going to have low wages and a history of not being able to get a job and that, over the long run, seriously reduces growth as well as hurting their own prospects and those of their families."

A Department for Work and Pensions spokesman says: "Youth unemployment isn't a new problem, but it's one we are absolutely determined to tackle, and through the Youth Contract we've hugely increased the number of work experience placements and apprenticeships to give young people the help they need to find a job.

"It's really encouraging that there are 79,000 fewer young people claiming jobseeker's allowance than there were in 2010, and that the number has been falling for the last 16 months, but we're not complacent - we'll continue to do everything possible to give young people the best chance in life."

Rachel Reeves, shadow work and pensions secretary, said: "With still almost a million young people out of work, this out-of-touch and incompetent government is letting down a whole generation.

"Leaving young people on the dole for years on end is unacceptable and unaffordable.

"Labour would guarantee a job for every young person unemployed for a year - a job they would have to take."

BBC Consumer: Getting a Christmas job and using it to advance your career