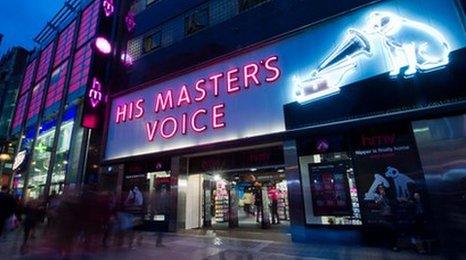 HMV is re-launching its digital music service, six months after the chain was rescued from administration.

The company has developed Android and iOS apps which will allow users to download songs instantly using image and sound recognition software.

However, prices on the app may not be the same as those in stores.

Restructuring company Hilco bought the retailer in April, after it had fallen into financial trouble three months earlier in January.

HMV now trades from 141 sites in the UK. Its flagship Oxford Street store in London re-opened last month after a refit.

However, it hasn't had a presence in the e-commerce world since the chain entered administration. 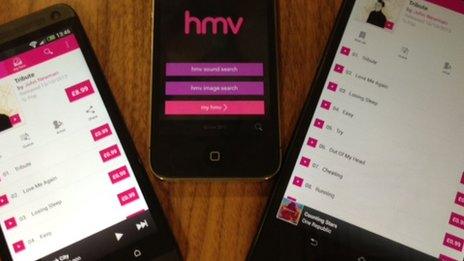 In August, Hilco hired James Coughlan to head HMV Digital in the UK, Ireland and Canada.

He denied HMV had too much work to do to catch up with services like iTunes and Amazon.

"I think it could be a blessing in disguise that HMV's been out of the game for this long," he said.

"There are so many services in the marketplace and there's certainly been lots of trial and error up until now that we can take key learnings from. It ensures we bring a service to market that will hit home with our consumers."

The company's website is also due to be relaunched next week, which will allow other smartphone owners to browse and download songs using a web-based app.

For Apple users, downloaded tracks will automatically be stored in iTunes.

Before it went into administration, there was criticism the chain didn't embrace digital retailing as early or as well as it should have done.

"They [Hilco] are hugely supportive and vocal about the fact that digital is certainly on our radar," said Coughlan.

"They've put me in this position to take the reins like nobody has in the HMV business before now."

HMV has ground to make up after data showed it had slipped to become Britain's fifth largest entertainment retailer.

Using the new app, users will also be able to scan album covers and listen to 30 seconds of any track.

James Coughlan said there would also be a focus on getting younger shoppers back into HMV stores. 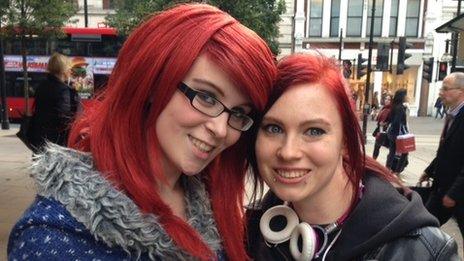 "We want to create a two-way channel for the youth so they can actually see what going into an HMV store can give them, but also relate to what they know well - the digital world.

HMV says it hopes the app will recreate the experience of browsing in a record shop for the digital crowd.

Some may need convincing.

Eighteen-year-old Bex Hemington from Bromley said: "I prefer to buy things online. It's just easier for me. I'll see what it is like.

"I suppose it's good if you're absolutely dying to have that thing there and then, but for me my laptop's so quick that it's not that difficult to open the laptop, buy something online and update my MP3 player."

Films and games will be added to the HMV app service next year.