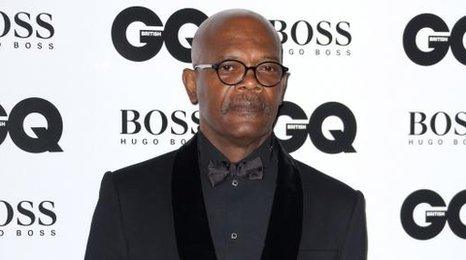 Hollywood actor Samuel L. Jackson has said that producers are trying to get Olympic champion Usain Bolt to star in Matthew Vaughn's next movie, The Secret Service.

He confirmed David Beckham would be playing himself in the movie.

It's thought filming will take place in London and other European cities.

Jackson made the comments at the GQ Men of the Year awards in central London, where he presented the legend award to actor Michael Douglas.

The world has changed in such an interesting way, fame is more important sometimes now than acting ability in a certain way
Samuel L. Jackson

The big budget movie will see the Django Unchained star play the villain.

The Secret Service is based on Mark Millar comic books and will see Colin Firth and Michael Caine play super agents.

Reporters asked Jackson whether he thought footballers should enter the acting industry.

He said: "The world has changed in such an interesting way, fame is more important sometimes now than acting ability is in a certain way.

"So that will be one of the unique aspects of this film, that there'll be people like David Beckham and hopefully Usain Bolt and other people that they have in the script.

"It will be interesting to see if they get Rupert Murdoch."

Other names rumoured to be making cameo appearances in the film include Adele and Sir Elton John.

The screenplay will be written by Jane Goldman, who worked with Matthew Vaughn on the Kick Ass movies.

The Secret Service is expected to be released in November 2014.