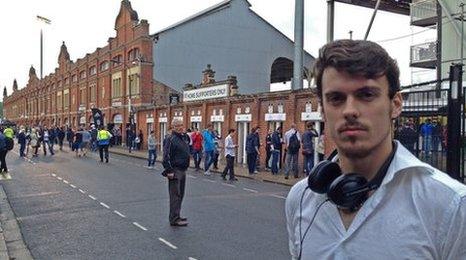 Supporters' groups from half of the teams in the Premier League say their clubs need to do more to make tickets cheaper for 16 to 24-year-olds.

Trusts from the likes of Manchester United, Chelsea and Tottenham say they're worried the average age inside stadiums is too high.

They claim young people are missing out on watching live football because they don't qualify for discount offers.

The Premier League says the average age of a supporter last season was 41.

They also claim that 19% of people attending matches were aged 18-24.

We have to compete financially but we need to be fair to our fans
Stephen Browett
Co-Chairman, Crystal Palace FC

Duncan Drasdo, chief executive of the Manchester United Supporters' Trust, said: "You still get kids being brought to the games with their parents but once they hit 18 they can't turn up on their own with their mates because they can't afford it.

"It kills the atmosphere. At Old Trafford we're losing the pockets of passionate support that comes from younger supporters." 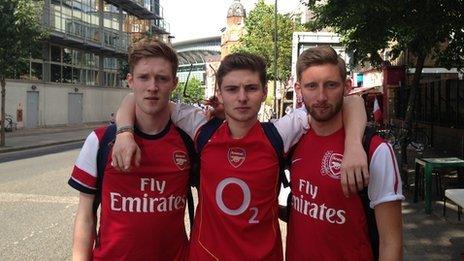 Lorcan O'Connor is a 22-year-old Fulham fan who claims he misses the majority of the club's games.

He said: "For our first home game this season I can only get a ticket for £49. That's just too much for me. I don't earn the salary that many other adults in the stadium do but I don't qualify for any discount schemes."

One club making efforts to encourage younger people to come to games is Crystal Palace.

They are one of the only Premier League clubs that offers discount deals to 18 to 21-year-olds at every home game.

Their co-chairman Steve Browett said: "We have to compete financially but we need to be fair to our fans. If you don't offer them a deal they won't be able to afford it."

At Arsenal's pre-season friendly against Napoli brothers Max, John and Jake Percival (above) claimed they never went to Premier League games at The Emirates.

The Arsenal Supporters' Trust recently convinced the club to start a new scheme for under-16s to offer them £10 tickets for certain homes games this season.

Tim Payton from the trust said: "Football must keep an eye on this and must keep making sure younger fans get into the stadium so we have a better atmosphere but also so we have a future for our game."

Fan groups calling for cheaper tickets for 16 to 24-year-olds: