Many singers are damaging their voices because of busy touring schedules and poor vocal technique.

Ali Tennant, who works on The Voice, says unless singers take care of their voices, the damage can be irreparable.

It's after the likes of Justin Young from The Vaccines and Nathan Sykes from The Wanted damaged their vocal cords singing.

"Most pop stars start off with problems with their voices because they are thrust into the limelight," said Ali Tennant.

If we sing at the wrong pitch and really stretch the front end of that vocal cord, then that can cause it
Janet Wilson
Ear, Throat and Nose consultant in Newcastle

"Or they are working the live circuit and they haven't had vocal lessons before and they get opportunities they have to take.

"They have problems because they don't know how to breathe and they can do irreparable damage."

Nathan Sykes' voice is back to full strength now but for a while he didn't know if he'd ever return to The Wanted.

He said: "It was strange, the surgeon sitting me down and saying, 'You have got to contemplate never singing again. Try and stay positive but if it does go wrong prepare to be devastated'."

His bandmate Jay McGuiness believes it was down to working too much.

"I think it was a case of when our song went big in America we had just come off a huge promo tour and doing loads of gigs, then we had to travel a lot," he said.

"I don't think our record labels saw eye to eye on our scheduling, so I think we were just worked pretty hard." 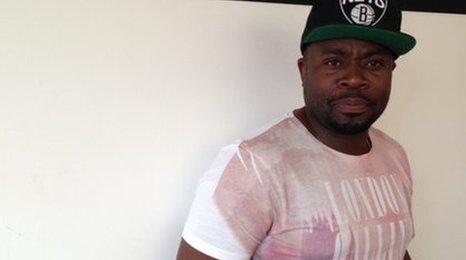 Danny O'Donoghue from The Script has had problems with his voice too.

"I've had sore throats and a collapsed lung," the frontman said. "I've had the doctor say, 'You'll never sing again.' It's terrifying."

Janet Wilson, an ear, throat and nose consultant in Newcastle, says they see a lot of singers working in pubs and clubs who haven't had much training.

"That is a recipe for disaster for the voice particularly as they become more successful," she said.

"If we sing at the wrong pitch and really stretch the front end of that vocal cord, then that can cause problems."

Tours only get bigger as artists become more successful.

Combining that with the amount of interviews singers have to do and there is often little time to rest their voice.

Vocal coach Ali Tennant says there are ways artists can protect their voice with exercises and being disciplined.

"A lot of young artists nowadays don't have any [discipline] because of the nature of how they come to be," he explained.

"Whether they came off The X Factor or The Voice, they don't have the time to learn.

"They audition and then they're on a concert tour."