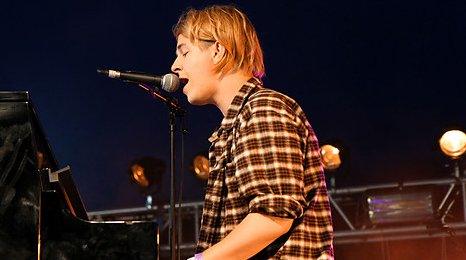 Tom Odell has scored his first number one on the Official Album Chart with his debut Long Way Down.

The singer songwriter was performing at Glastonbury Festival when he found out the news.

He played twice on Sunday, on the John Peel Stage and the BBC Introducing Stage.

"I got a bit emotional actually, it's just the atmosphere at Glastonbury, finding that out, it's still sinking in," he said.

The last year has already been impressive for Odell who was signed by Lily Allen to her label, In The Name Of (ITNO), in 2012.

He was named the Brits critics' choice winner for 2013, becoming the first male to win the award.

Although Tom Odell is a newcomer, he says getting a number one album is the culmination of many years work.

I got a bit emotional actually, it's just the atmosphere at Glastonbury, finding that out, it's still sinking in
Tom Odell

"I've been doing it since I was 16 and until I was about 20, I didn't have any money and I was working in bars," he explained.

"Just to be at this point now having gone through what I have been through.

"It feels very unreal but amazing and I just have to thank everyone that's bought the record and supported me so far.

"It really, really means a lot to me and feels very good, I'm just going to have a good time tonight."