Keith Richards: Rolling Stones not too old for Glastonbury 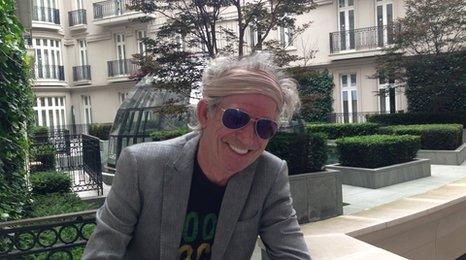 The Rolling Stones will make their Glastonbury debut this weekend, headlining the Pyramid stage on Saturday night.

They have an average age of 69 with some saying they are too old to play.

"I'd say, 'What do you know about it? You've never tried it'," laughs the band's guitarist Keith Richards.

Don't concentrate on the rock, because anybody can rock, but the roll that's another thing
Keith Richards
The Rolling Stones

"It's good for your health to play rock'n'roll in a clean living band like The Rolling Stones. You should try it. It's better than church."

The Rolling Stones have been together for more than 50 years and have never played the UK's biggest and most famous festival.

"It just never occurred. Many times it has been on the list of tours and stuff and for one reason or another it never coincided," explains Keith Richards in an exclusive interview with Newsbeat ahead of Glastonbury.

"[It's] like a black hole in space or something but in we go this time.

"I'm looking forward to it because it is an iconic gig and it's an iconic band and finally the two meet at last.

"In a way it's kind of weird that at last we've made it to Glastonbury. It's like building Stonehenge right?"

Follow all the action and see who's playing at BBC Glastonbury

It's hard to imagine a band like The Rolling Stones feeling nervous about any gig, having performed all over the world.

But Keith Richards says there are things they worry about.

"I think the only pressure we feel is that it is the first time we've done an outdoor show for yonks and English weather," he says.

"Throwing in those two equations, yeah there is maybe a little apprehension." 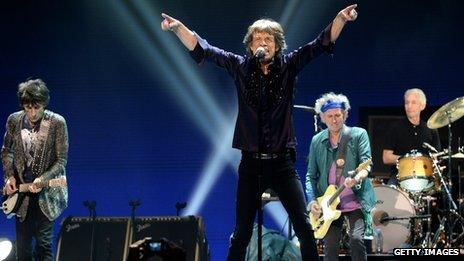 He is also aware that the other two headliners, Arctic Monkeys and Mumford & Sons, are Glastonbury veterans in comparison.

"They are all great cats and I think most of them have played there before," he says.

"They probably have more experience than we do of playing Glastonbury because it is a unique way of working."

See what the weather's going to like at Glastonbury

The Rolling Stones are often asked what the key to their success is and how have they lasted so long, when so many other bands have failed.

Richards says he doesn't know. "Determination to outlive them all," he laughs.

"It's just a unique bunch of guys. Charlie Watts, that man can play drums. It's so subtle, it's the roll I think.

"Don't concentrate on the rock, because anybody can rock, but the roll - that's another thing."

Many of the bands that will be playing Glastonbury Festival this weekend surely want to know the secret to their staying power.

Richards says there is no secret, you just have to be determined.

"Stick to it and make sure the drummer's got it. That's all I can tell you," he advises.