Government health officials say they're increasingly worried about a rising number of counterfeit slimming pills being sold online to people in the UK.

The Medicines and Healthcare products Regulatory Agency (MHRA) says it has seized a record £12.2 million of fake and unlicensed medicines in the UK.

They say a large amount of these were unlicensed diet pills which often contain harmful ingredients.

A raid in Greater Manchester uncovered more than 12,000 slimming pills.

Newsbeat accompanied the MHRA on the raid.

"What we're seeing is people going online, self diagnosing and self prescribing," said Danny Lee Frost, from the agency.

"If someone goes online to buy these types of products and think they're safe and healthy it's our job to tell them 'No they're not.'"

I got cold sweats, really bad insomnia, some heart problems. It was worst at night. I couldn't sleep because my heart was going too fast. It felt like a heart attack
Chrissy Roberts

Nearly 1,300 UK based websites have also been shut as part of the crackdown.

The risks of taking the diet pills include anything from short-term sickness to long to term heart-problems. 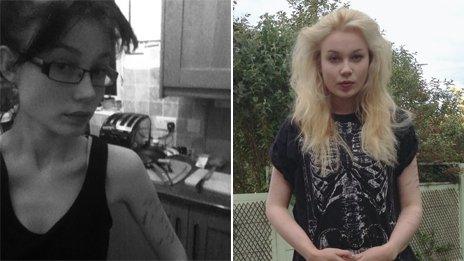 Chrissy Roberts, 18, from Southport bought some online when she was suffering an eating disorder.

"I was just a 16 years old and within three clicks I'd bought £60 worth of tablets. It was almost too easy for me to get them."

Within a short time she became worried about the effects the pills were having.

"I got cold sweats, really bad insomnia, some heart problems.

"It was worst at night. I couldn't sleep because my heart was going too fast. It felt like a heart attack.

"I thought I wouldn't wake up sometimes."

The usual advice to people considering slimming pills is to discuss it with a doctor.

Video caption GP 'not a fan' of slimming pills

Dr Kate Adams, who works at a surgery in East London said: "I'm not a fan. They're not an answer to weight issues.

"There isn't a quick fix, I think it's about sensible eating and changing your lifestyle."

The MHRA's Acting Head of Enforcement, Nimo Ahmed, said: "When people buy medicines from an illegal website on the Internet they don't know what they're getting, where it came from or if it's safe to take.

"The dose could be too high or too low, or the ingredients could break down incorrectly in the body which makes the medicine ineffective."