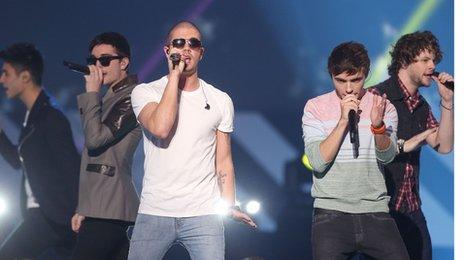 The Wanted singer Nathan Sykes has given his first interview since undergoing specialist throat surgery.

The 20-year-old said he was "still having a few problems" with his vocals since the procedure but told US television that his voice would "hopefully be better soon".

It means he is taking a break from the band's live performances.

However, he has joined them for promotional duties of their US reality TV show, The Wanted Life.

Speaking to E! presenter Ryan Seacrest, Sykes said his voice was "not really there at the moment".

He added: "I'm having a few problems and we're still trying to work out what's up with it but hopefully I'll be better soon."

Sykes did not reveal the exact problem he had suffered but is understood to have had a haemorrhaging vocal cord, a condition which Adele suffered at the end of 2011.

He had his operation in Los Angeles before returning home to Gloucestershire to recover.

You can obviously hear in his voice something is difficult. All the other tracks we did after that he wasn't able to record and it's been quite difficult for him
Siva Kaneswaran

With his voice audibly croaky, he said: "I've never had it like this before. It's a new experience."

After his vocal problems were diagnosed, a statement from the band's management said: "The priority for Nathan, his label and management is that he is given time to recover and receive the best treatment possible."

The band - made up of Max George, Siva Kaneswaran, Jay McGuiness, Tom Parker and Nathan Sykes - are carrying on without Sykes for now.

They are still working on their third album, with Nathan Sykes having recorded some of his vocals already. 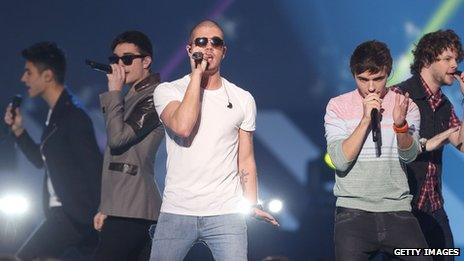 Nathan Sykes worked on the group's new single Walk Like Rihanna before he had his surgery.

"You can obviously hear in his voice something is difficult," Siva Kaneswaran said in April. "All the other tracks we did after that he wasn't able to record and it's been quite difficult for him."