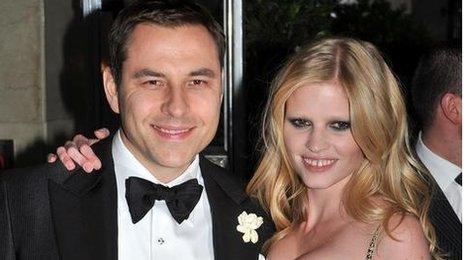 Britain's Got Talent star David Walliams has become a father for the first time.

His wife, model Lara Stone, has given birth to a boy.

A spokeswoman for Dutch fashion model Stone, 29, said: "We can confirm they have had a baby boy." She said they had no further details about the baby or the birth and a spokeswoman for Walliams did not wish to comment.

The couple married three years ago in London.

It's a bit of a curse if you're called Apple or Peaches or something like that. I think we're just going to go with a normal name
David Walliams on Chatty Man

Walliams acknowledged the birth by posting a picture of a floral bouquet on Twitter which he said was from BGT boss Simon Cowell.

The bunch featured white roses with what appeared to be sprigs of rosemary, lavender and mint.

Thanking Cowell, he wrote: "Someone always has to show off and send the biggest bouquet."

Fellow Britain's Got Talent star Amanda Holden said she was thrilled to hear about the birth and sent a message on Twitter saying: "Love love love to them all."

In a recent television interview, Walliams said he would be unlikely to give the child an unusual name.

He told Alan Carr on his Channel 4 show Chatty Man: "It's a bit of a curse if you're called Apple or Peaches or something like that.

"I think we're just going to go with a normal name.

"I'm really excited about it because I've been writing children's books and you get to that age when a lot of your friends have kids and you start thinking, 'When's it going to happen to me?"'

Walliams, who is on TV as a judge in the latest series of ITV's talent series, is best known for his role in Little Britain and is also the author of a series of best-selling children's books.

The 41-year-old's novel Gangsta Granny is to be adapted by BBC One and will be screened this Christmas.

He has swum the English Channel and the River Thames to raise money for Sport Relief.

Lara Stone met David Walliams in 2009 and came eighth on a Forbes list of the highest-earning models in 2012.