Measles sufferers in South Wales warn to 'get vaccine'

By Declan HarveyNewsbeat reporter in Swansea

Chloe is 15. She hopes the hearing in her left ear will return fully.

It went three weeks ago when she contracted measles which also gave her swollen eyes, a cough, loss of appetite and dizziness.

She and her two brothers all contracted measles.

Their parents didn't give them the MMR vaccine in the 90s, after a report wrongly claimed the jab could cause autism.

Both Chloe and her brother Jordan, 14, want other people in the Swansea area to take part in a vaccine programme this week.

Chloe said: "It's not worth going through what we went through.

"Coughing constantly, sneezing, runny nose, I couldn't hear out of my left ear for a couple of days. And my eyes were really bad, so I thought I could have gone blind or anything."

Find out more about measles

Authorities have already said the epidemic could last for weeks to come.

An extra 43 cases of measles have been reported to Public Health Wales since Tuesday, bringing the total to more than 800.

A total of 77 people have been hospitalised since the beginning of the outbreak.

Get the vaccine as soon as you can. I still get dizzy and weak when I get up in the morning
Jordan, 14
Swansea

Chloe says she contracted measles in her classroom.

"My friend had it in my class and she sat right behind me, and I probably caught it through there," she said. "And my friend next to me said, 'We might all catch measles.'"

She says she was the 17th person in her school to contract measles.

Jordan said he'd been feeling the worst he'd ever felt.

"Literally red blotches covered my body," he said. "At one point I couldn't stand up, I thought I'd passed out on the bed. I couldn't see anything or hear.

"It's not worth going through, knowing there's a vaccine out there." 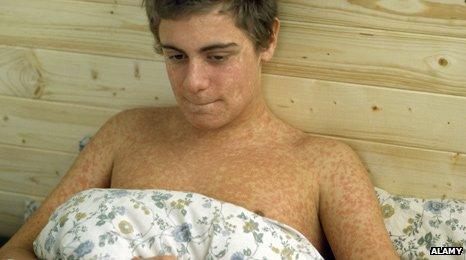