Lana Del Rey says her second album will be 'spiritual' 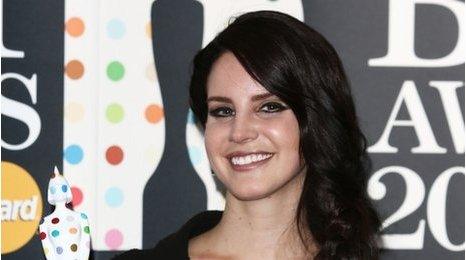 The American singer, who now lives in the UK, has recently been writing new music in Santa Monica, California, for her new release.

She said: "It's a little more stripped down but still cinematic and dark."

Last week the star, whose real name is Elizabeth Woolridge Grant, won the award for best international female at the Brit Awards.

Speaking to Newsbeat after her win, the 26-year-old said: "I've been working on it really slowly but I love everything I've done.

"I've been writing in Santa Monica (California) and I know what the record sounds like. Now I just have to finish it.

As soon as I write the words to a song, I can paint exactly what I want the picture to look like
Lana Del Rey

Frenchman Yoann Lemoine, or Woodkid as he's know on stage, directed Lana Del Rey's Born To Die and Blue Jeans videos and the singer says she already has a vision for one of her new tracks.

"For some reason the videos are still the easiest things that come," she explained.

"As soon as I write the words to a song, I can paint exactly what I want the picture to look like.

"I have a song called Black Beauty and I've already talked to people about making it."