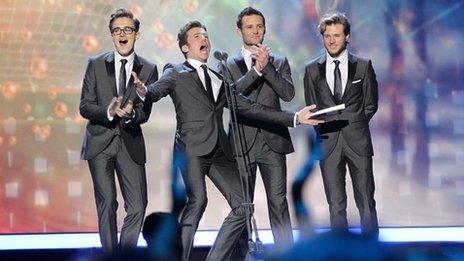 McFly's Tom Fletcher has confirmed that he and band member Dougie Poynter have written a second children's picture book.

Last October, Random House Children's Books released the first in the The Dinosaur That Pooped series.

The band made the announcement at the National Television Awards were they were presenting the best talent show award.

Tom couldn't confirm the date of release for the book.

"There will be another kids' book. We've just finished writing the second in The Dinosaur That Pooped series. So that will be coming out before summer."

The lead singer also confirmed that both he and Dougie may be writing some more children's books.

"We might be, yes, we're just in talks. We have a few ideas. So yes there could be a few more to come in a different series."

McFly say they are currently preparing for their UK tour.