Filming of The Muppets 2 began in London earlier this month with the movie scheduled for release in March.

He said: "Luckily I can sing, I'm not bad actually, I'm a failed pop star so I can sing.

"But dancing, it fills me with dread and I have to sing and dance in this, I mean do some proper Hollywood numbers."

He added: "I'm pretty sure people are going to be watching [Kermit] the frog. 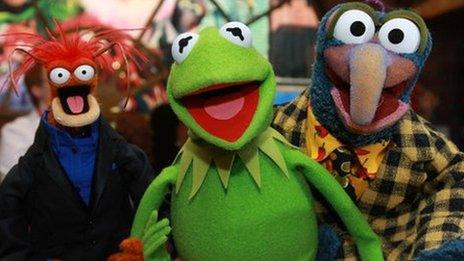 "I think he's going to draw the attention away from me because he's got some crucial moves.

"I have the biggest trailer but Kermit will spend some time in my sink."

The first film, which starred Jason Segel, took more than $150 million (£92.8m) worldwide and won an Oscar for best song at the 2012 Academy Awards.

It's Ricky Gervais' first leading role in a feature film since The Invention of Lying in 2009.

He's also creator of The Office, Extras and An Idiot Abroad.

Ricky Gervais has also been forced to defend his new Channel 4 programme.

Derek, which following suggestions he was mocking people with learning difficulties.

"I treat my career in a kind of Darwinian framework," he said. "I do what I want and I either survive or I don't. And at the moment I'm around."

Ricky Gervais has been forced to defend his latest creation though. 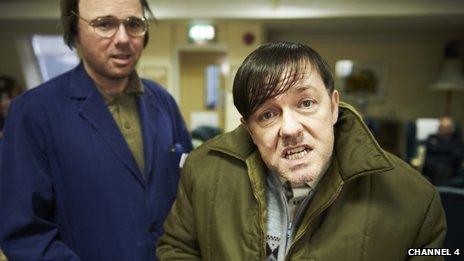 There have been claims that Derek, about life in a care home, mocks people with learning difficulties.

"He's different. But then so are a lot of people. He's not the smartest tool in the box but he's cleverer than Father Dougal [from cult TV series Father Ted], and not as different as Mr Bean.

"He's based on those people you meet who are on the margins of society. Nerds, loners, under achievers."

In fact Gervais says of all the characters he's created, Derek, is the one he's most proud of.

"He puts others first, says what he wants and he's painfully honest and sweet."

Derek starts tonight on Channel 4 at 10pm while The Muppets is currently filming at Pinewood Studios and is due for release in March next year.