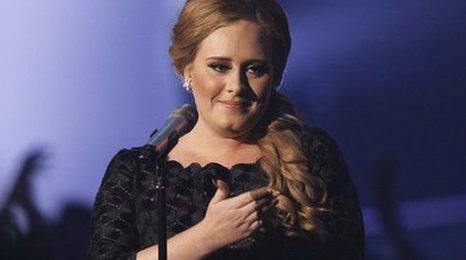 Data from the Official Charts Company shows that the singer needs half a million more sales of her second record to go above Abba, who are third.

It passed Michael Jackson's Thriller and Pink Floyd's Dark Side of the Moon earlier this year.

Last Christmas 21 overtook Amy Winehouse's Back To Black to become the UK's biggest-selling album of the 21st Century so far.

It has sold 784,000 so far this year, making it the second biggest-selling album of 2012 so far behind Emeli Sande's Our Version Of Events.

The singer also had her first child in October.

Michael Jackson's Thriller is still the best-selling album ever across the world.

It is estimated to have sold more than 70 million copies.

The top five biggest-selling albums in the UK are: