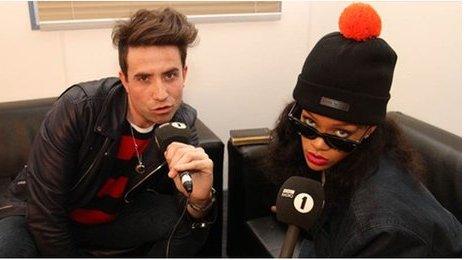 Rihanna has defended her 777 tour, where she performed seven shows in seven cities over seven days.

The Barbadian singer took a group of 200 journalists with her on the promotional tour to mark the release of her seventh studio album, Unapologetic.

In her only UK interview, she told Radio 1 Breakfast Show DJ Nick Grimshaw that it had been "fun but exhausting".

"It was different having to do your job but also have 200 guests come along with you," she said.

"They all want you to host a party every time you get on the plane after a show but you really only have that time to sleep until you get to the next country.

"Sometimes it was a two-hour ride to the next country and that was all the sleep you would get."

Some of the journalists on the Boeing 777 jet complained that they had not seen Rihanna since the first day of the tour despite being promised interviews with her.

An Australian DJ was videoed streaking through the plane as it travelled from Berlin to London and fans who were invited along said journey times and shows were repeatedly delayed.

But Rihanna said she had to "use her time wisely".

"I knew I had seven countries and seven shows and I had to save my voice," she said. "I didn't go crazy. I didn't party too hard. 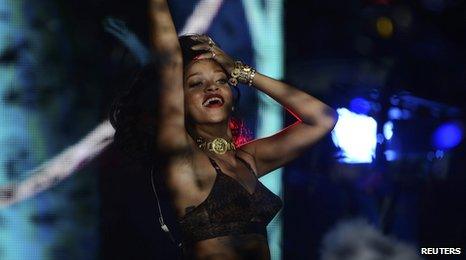 "I did have fun though. I tried to get everybody involved but sometimes you just wish you could give more."

Rihanna visited Mexico City, Toronto, Stockholm and Paris as well as Berlin on the 777 tour before finishing in New York.

At her London gig, Rihanna was cheered on by more than 1,500 specially invited fans at the The Forum in Kentish Town.

She admits she still gets nervous every time she performs.

"I always get nervous," she told Nick Grimshaw. "[It's] any audience but the smaller the audience, the scarier.

"If you start thinking about all the people watching at home watching on TV, it's overwhelming."

The 24-year-old star has gone to the top of the album chart with Unapologetic, which has become her third number one album in three years.