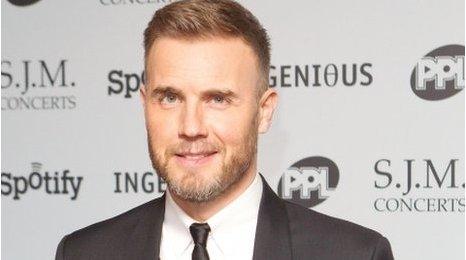 Gary Barlow says Take That will "hopefully" go on tour in 2014.

Gary, who was being honoured at the Music Industry Trust Awards, said next year would also be "a big Take That year".

The X Factor judge was also celebrating reaching number one with Candy, the Robbie Williams single he co-wrote.

The singer said he couldn't confirm that Robbie Williams would be joining the band though. "Who knows? We're yet to talk about that one," he said.

"We're going to start recording and planning in the New Year. So yeah, I guess we need to have that conversation," he said.

The star also admitted he was still enjoying The X Factor, despite being down to one contestant.

It's after Kye Sones wasvoted off the show when it went to a public vote after a sing-off with Rylan Clark.

"It's great fun," he said. "I hate the down times, I hate the bad weeks, I hate the good weeks. It's just one of those shows which is a rollercoaster.

"Some weeks I come home feeling amazing, other weeks I'm annoyed. It's just one of those shows."