Emeli Sande says she has 'so many ideas' for new album 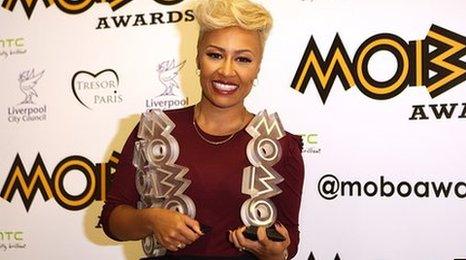 Emeli Sande says she has plenty of ideas for the follow-up to debut album Our Version of Events.

Speaking at the Mobos, where she won three awards, she said: "I'm definitely going to be working on it, or just new material to put out there.

"Maybe an EP before the album but I'm just excited because I've got so many ideas and I've been writing a lot."

I'd love to get in there again with Labrinth, that would be great. [I'm a] big fan of Kanye West, there's lots of people
Emeli Sande

The singer also named Calvin Harris, Labrinth and Kanye West as some of the people she'd like to work with.

The 25-year-old also said she would be trying to avoid any pressure over her new material.

"I'm trying not to think about it," said the singer.

"The way I wrote the first album was with no expectation and that's the kind of mindset I need to get into for the second one." 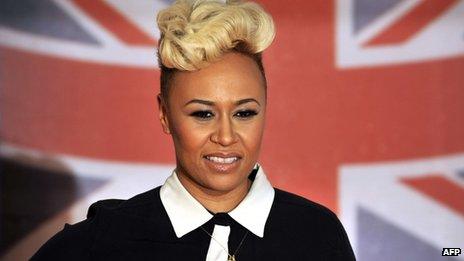 The past year has been an extremely successful one for the singer, including Olympic performances and a number one album.

Her CV also includes collaborations and writing credits for the likes of Labrinth, on recent single Beneath Your Beautiful, as well as Tinie Tempah and Leona Lewis.

Calvin Harris also recently said he wanted to work with the star.

"I really want to work with Calvin," said Emeli Sande. "But you can only do what you can do [timewise].

"I'm trying to write for people that inspire me and trying to work with as many people as possible.

"I'd love to get in there again with Labrinth, that would be great. [I'm a] big fan of Kanye West, there's lots of people."

Emeli Sande admitted it was hard to turn down work but that she was going to try to focus more on her own material.

"I've got opportunities to write for people I've been inspired by for so long, it's hard to say no. I just have to shut the door and get on with it."