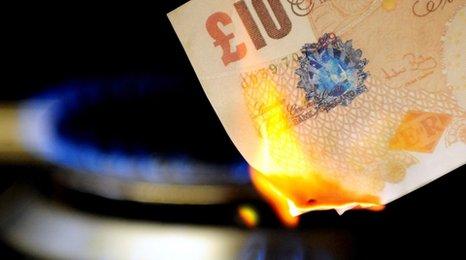 British Gas is putting prices up by an average of 6%.

The government says the rise is "not welcome" but British Gas denies it's just trying to make more money for shareholders.

N Power has already followed suit, saying its gas prices will rise by an average of 8.8%, with electricity going up by 9.1% from 26 November.

Energy regulator Ofgem has revealed plans to force suppliers to tell customers about the cheapest gas and electricity tariffs they have on offer.

British Gas says that £25 of its £80 increase will pay for improvements to the National Grid - the way gas and electricity is sent to your home.

Another £25 of the price rise will go towards green issues and the rest will go on wholesale gas prices which have gone up.

But it's not just British Gas and N Power, other energy companies are expected to carry out similar price rises in the coming weeks too.

That means people wanting to save money will have to find new ways of helping cut their energy costs.

Turn down your thermostat

Reducing the temperature dial on your central heating by just one degree Celsius could cut 10% off your heating bill - about £55 per year.

Use a draft excluder

Put those long sausage cushions in front of draughty doors. It could save you around £25 a year.

British Gas will come and fit loft and wall cavity insulation for free, even for non customers.

That could reduce bills by about £100 a year

They last up to 10 times longer than ordinary bulbs, and don't cost much more. Using one can save you around £55 over the lifetime of the bulb.

Cut down time in shower

Try to spend no-more than 10 minutes in the shower which will save on hot water.

Don't put anything like a sofa in front of your radiators as it will absorb all the heat.

Use thick curtains in the winter

Close them when it starts to get dark which helps keeps the heat in.

More energy saving tips and details about grants available to help save you money can be found on the Energy Saving Trust website.