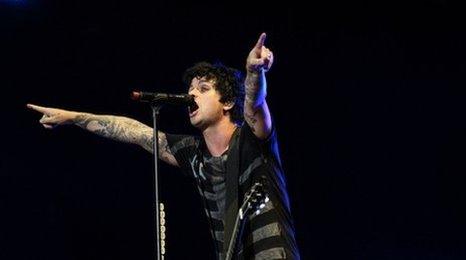 Green Day ended their set at a festival in Las Vegas on Sunday (23 September) with a dramatic outburst, after a sign appeared saying they had one minute left to perform.

Green Day were playing on the first day of the iHeartRadio Festival.

Other artists who played that day included Usher and Swedish House Mafia.

Rihanna was scheduled to close the first night of the two-day festival with Calvin Harris, Ne-Yo, Taylor Swift and Pitbull all on the line-up for the second day.

It's reported Green Day, who have sold 65 million records worldwide, had their set time cut from 45 minutes to 25, though festival organisers deny this.

The singer told the crowd he wasn't Justin Bieber and that he had been around since 1988.

He finally hurled his guitar against the stage floor, then stormed off saying "we'll be back".

A spokesperson for the festival told Newsbeat that Green Day's set wasn't cut short and after his set Billie Joe was "pumped and laughing backstage.

He said: "He was putting on a show. That's what punk rock is all about and the fans loved it."

The punk rock trio had posted on their website beforehand that they were 'ready to blow the roof off' at the festival.