One Direction win fight against US band to keep name 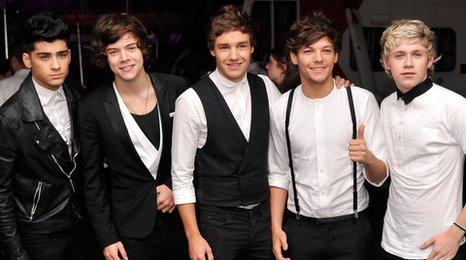 One Direction have won a legal dispute over the right to keep using their band name.

A US punk group of the same name challenged the UK boy band earlier this year, saying that they had called themselves One Direction first.

One Direction US will now be known as Uncharted Shores, while the UK group will remain as One Direction.

The two groups issued a press release announcing the change of the American band's name.

It stated that both groups were happy with the outcome.

One Direction US sued the British band for $1 million (£630,000) in damages and asked for a share of the former X Factor stars' royalties.

The American group said that they had received hate mail and death threats from fans of the UK group.

Simon Cowell's entertainment company, Syco, put in a counter-claim suggesting the US band were trying to make money from their success.

Harry Styles and Zayn Malik had previously insisted that One Direction UK would not change its name.

The UK five-piece, who were put together on The X Factor in 2010, have made chart history in America.

Their album Up All Night went straight in at number one on the Billboard chart earlier this year.

It made them the first British band to top the chart with their debut album.