Cher Lloyd is booed and walks off stage at V Festival 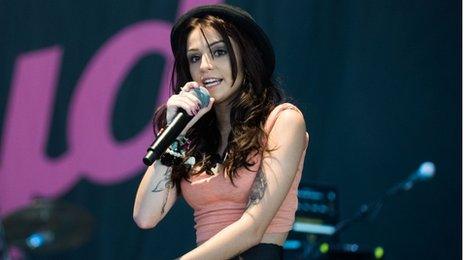 Cher Lloyd has walked off stage during her performance at V Festival at Hylands Park in Chelmsford, Essex.

It happened after the 19-year-old was booed by some parts of the crowd as she sang on the Arena Stage.

The former X Factor contestant was seen crying before composing herself and making her way back on to continue the rest of her set.

Cher Lloyd says bottles were also thrown at her during her set on Sunday afternoon (19 August).

Speaking on Twitter after her performance, she said: "Thank you so much for all the nice messages, shame that a couple of people had to ruin it.

This is not the first time the singer, originally from Malvern in Worcestershire, has been targeted.

She has spoken in the past about abuse she's received on Twitter, telling Newsbeat: "It disgusts me that online bullying - nobody really cares about it.

"No-one has made a big enough impact to stop these people.

"I'd definitely like to see more done about it."