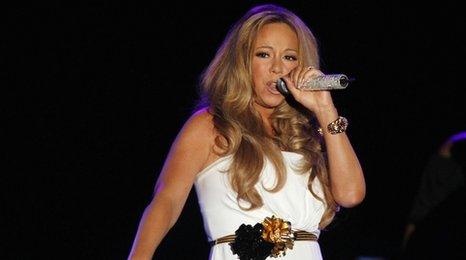 Mariah Carey will join American Idol as a judge for the show's next series, TV network Fox has announced.

Aerosmith front man Steven Tyler and singer Jennifer Lopez left the show at the end of the 11th series in May.

"I am so excited to be joining 'Idol," said Carey. "I can't wait to get started in the fall and I will see you in January."

Mariah Carey, 42, joins long-serving Randy Jackson on the judging panel, who is her joint manager.

According to one report, the Grammy-winning pop star will get $18 million (£11.5m) for her one-year contract with the option of renewing it.

American Idol is increasingly under pressure in the ratings from rival shows like Simon Cowell's X Factor USA and The Voice.

Last season's finale was the least watched in its history and the show is seeing its young, adult audience shrink.

I'm happy for her, actually. I like Mariah. I think she's going to find it difficult to say no. You've got to say no to people and she's sweet
Simon Cowell

"Not being the only game in town now, we need to keep things fresh," said Fox entertainment chief Kevin Reilly.

No announcement has been made on a third judge.

Kevin Reilly added: "We have the biggest names in the business, like Mariah Carey, interested in doing this.

"So for the next couple of weeks it will be a matter of picking the right one, with the right chemistry, making the deal and finalising this."

Ryan Seacrest will be back as the show's host.

"I'm happy for her, actually," he said. "I like Mariah. I think she's going to find it difficult to say no.

"You've got to say no to people and she's sweet. No, I think she'll be great."