Gary Barlow is number one celebrity dad of the year 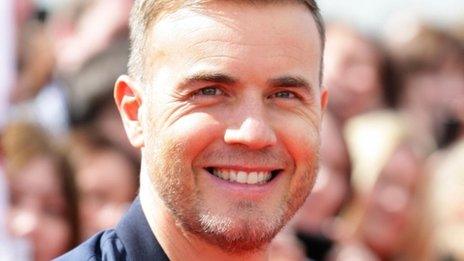 Gary Barlow has been named celebrity dad of the year.

The Take That star is also number one in the singles chart with Sing featuring The Commonwealth Band and the Military Wives.

The singer's wife is expecting the couple's fourth child.

Peter Andre was last year's winner of the title. Earlier this year, Gary Barlow tweeted a message telling Peter Andre "to stand aside".

It is the first time Gary Barlow has won the award.

The X Factor judge who was chosen in a public vote said it felt "amazing" to win the award.

"I've been waiting for it for a long time," he said. "My kids are really excited and I don't think they can believe it."

The 41-year-old already has three children Daniel, Emily, Daisy and his wife Dawn is expecting another girl.

"Being a dad is a really important part of my life and it means a lot to have won this award," the singer added.

Also in the running for this year's award were Jay-Z, footballer Cristiano Ronaldo and Prime Minister David Cameron.