Will Ferrell's Anchorman 2 to begin filming in 2013 - BBC Newsbeat

Will Ferrell's Anchorman 2 to begin filming in 2013 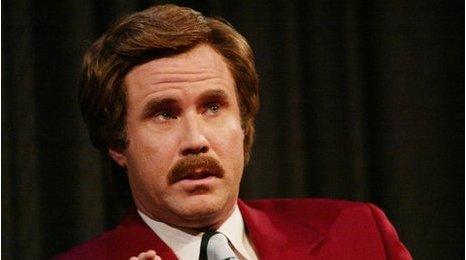 Will Ferrell has confirmed that all of the original Channel 4 news team will be back for comedy sequel Anchorman 2: The Legend Continues.

"Filming will begin next year," confirmed the Hollywood star.

"We are working on the script right now and we are going to start filming in February or so."

The original Anchorman film follows newscaster Ron Burgundy in 1970s San Diego as he struggles to cope with the introduction of a new, younger network co-presenter.

2004's Anchorman: The Legend of Ron Burgundy made $91m (£57.2m) at the box office around the world and subsequently became a cult hit on DVD.

"We are also getting a lot of people calling us up and saying, 'Can I be in the movie? I will do anything literally anything,' which is very flattering," Will Ferrell added.

The actor was speaking at the launch event for Soccer Aid, which is a series of celebrity football games played at Manchester United's Old Trafford ground to raise money for charity.