Kazakhstan thanks Borat for 'boosting tourism' 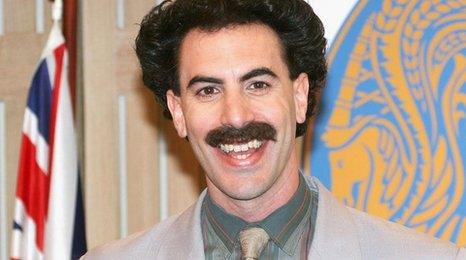 The government of Kazakhstan has thanked Sacha Baron Cohen's creation Borat for boosting tourism in the country.

The authorities banned the film and threatened to sue the comedian after its release in 2006.

But now Kazakhstan's foreign minister has said he is "grateful" to Borat for "helping attract tourists" to the country.

He said 10 times more people were applying for visas to go there.

The film Borat: Cultural Learnings of America for Make Benefit Glorious Nation of Kazakhstan follows the journalist Borat Sagdiyev as he travels to the US and pursues the actress Pamela Anderson.

Although it was shot in Romania, officials felt the movie portrayed Kazakhstan as a racist, sexist and primitive country.

Borat bragged about incest and rape. He also joked that the former Soviet nation had the cleanest prostitutes in the world.

The government banned sales of the DVD and blocked users from visiting Borat's website.

Just last month Kazakhstan lodged a formal complaint with the Olympic Committee of Asia after a spoof national anthem from Borat was played at a sports event in Kuwait by mistake.

But Foreign Minister Yerzhan Kazykhanov told politicians on Monday, 23 April: "With the release of this film, the number of visas issued by Kazakhstan grew tenfold.

"I am grateful to 'Borat' for helping attract tourists to Kazakhstan."