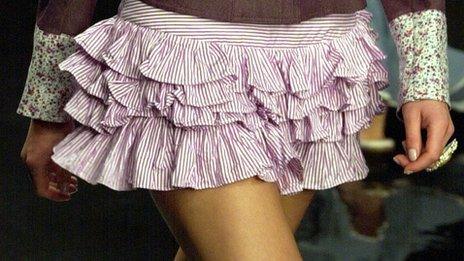 A new Israeli law has been introduced banning underweight models from catwalks and adverts.

It is believed to be the first attempt by any government to actively promote a healthy body image.

Although other countries have taken steps to prevent "size zero," they have not introduced legislation.

Rachel Adato, a politician in Israel, said she hoped the law would protect young people from having unrealistic ideas about how they looked.

It is hoped that the measure will help reduce eating disorders.

The law says women and men cannot be hired for modelling jobs unless a doctor says they are not underweight, with a body mass index (BMI) of no less than 18.5.

Models will have to produce a medical report dating back no more than three months at every shoot that happens in Israel or for its market. The medical reports need to state they are a healthy weight.

The law also bans the use of a model who "appears underweight" in a photo and says advertisers must state if a picture has used computer editing to make a model look thinner.

Model Dror Ben David, 21, is in favour of the new law.

She said: "When a 15-year-old is being told to go home and lose five or six kilos (10lb) and she actually does that, it hurts her health.

"It hurts her self-image and that's why I think this law really saves lives."

In 2008, Madrid Fashion Week banned women from the catwalk whose BMI is below 18.

The UK has guidelines, but the fashion industry is self-regulated.

Make girls go to a doctor. Get a system to follow girls who are found to be puking
Adi Neumann
Model

In 2007, The British Fashion Council, recommended that models should provide "good health" certificates from doctors to show that they do not have eating disorders. However, these were not taken up.

Critics of the law said that it should have focused on health, not weight, saying many models were naturally very thin.

Top Israeli model Adi Neumman said she wouldn't pass under the new rules, because her BMI was 18.3.

"Force actual tests," she said. "Make girls go to a doctor. Get a system to follow girls who are found to be puking."