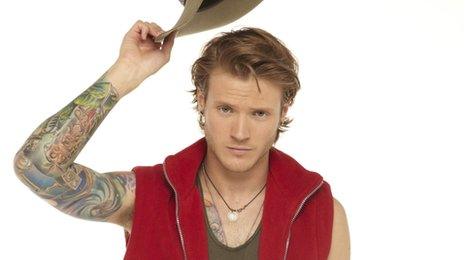 This October, Random House Children's Books will release The Dinosaur That Pooped Christmas.

Tom Fletcher describes the plot as being "about a boy who gets a dinosaur for Christmas which goes on an unstoppable festive eating rampage until Christmas is gone".

"The only way to get Christmas back is for the dinosaur to poop it out."

Despite the comedy title, the pair are taking their writing task seriously.

"We want people to know that this book comes from a genuine passion for writing and reading and it's hopefully the first of many," said Tom Fletcher.

I think it's easy to see that this book comes from Dougie's fascination with dinosaurs, my love for Christmas and a shared obsession with poop
Tom Fletcher from McFly

"We wrote what we found funny, a book we would have loved as kids. And we hope parents will enjoy it just as much as their children."

The book will be illustrated by Garry Parsons, whose previous work includes There's an Ouch in my Pouch.

McFly are on tour in the UK after all the band members recently tried their luck on reality shows.

Fletcher and Poynter are both fans of children's picture books and admit they "spend hours" in book shops to "get inspiration when writing".

"I think it's easy to see that this book comes from Dougie's fascination with dinosaurs," commented Tom Fletcher. "My love for Christmas and a shared obsession with poop."