Whitney Houston leaves everything to daughter in will - BBC Newsbeat

Whitney Houston leaves everything to daughter in will 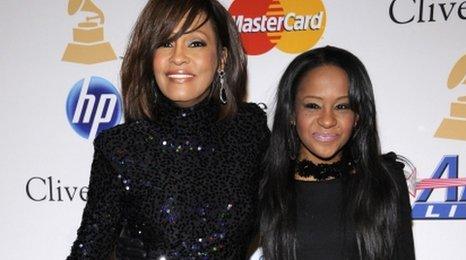 Whitney Houston left everything in her will to her only child, 19-year-old Bobbi Kristina Brown.

Specific assets are not mentioned but furnishings, clothing, personal effects, jewellery and cars are all included, according to The Insider.

The will was filed in Atlanta on Wednesday (7 March) with the singer's money to be put in a trust.

Her sister-in-law and manager, Patricia Houston, has been appointed administrator of the estate.

Houston's mum Cissy is named as executor with her sister-in-law Donna and brother Michael acting as trustees.

Bobbi Kristina will receive part of the money after she turns 21.

She will get more of her inheritance at 25 and the rest at the age of 30.

Whitney Houston's trustees can give her money for various purposes, including tuition, to buy a house or to start a business.

The will was signed on 3 February 1993, about a month before the singer gave birth to her daughter.

She was found in the bath of her suite at the Beverly Hilton hotel.

Houston's hits include 1992's I Will Always Love You and I Wanna Dance with Somebody (Who Loves Me) from 1987, both of which went to number one in the UK singles chart.

Her later career was overshadowed by substance abuse and her turbulent marriage to singer Bobby Brown, who is Bobbi Kristina's father.