Anger over Whitney Houston coffin photo in US magazine

By Greg DawsonNewsbeat US reporter in New Jersey 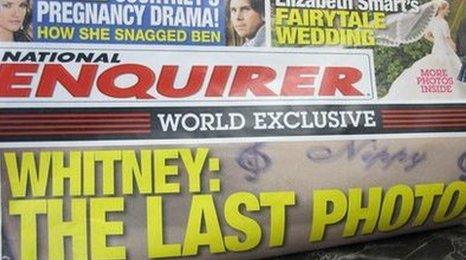 One of America's best known tabloid magazines has caused a controversy after publishing a photo of Whitney Houston's body lying in a coffin.

The image, on the front page of the National Enquirer, was thought to have been taken inside the private funeral home where the star's family gathered on the eve of her funeral.

The picture, which hasn't been verified as genuine, shows Houston wearing a purple dress and a gold brooch.

She was found in the bath of her suite at the Beverly Hilton hotel, a day before the Grammy Awards, which she had been due to attend.

Newsbeat has been talking to fans in Newark, the singer's hometown, about the National Enquirer story. 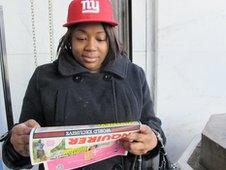 "Are they allowed to do that? That is wrong.

"That is invading her privacy. That is messed up." 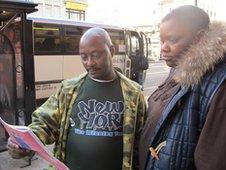 Basir: "No, it doesn't shock me, because you can't hide stuff like that."

Shanda: "So, somebody crept inside and took it (in the funeral home)?

"I think it's fair because they wouldn't let people go in and see for themselves." 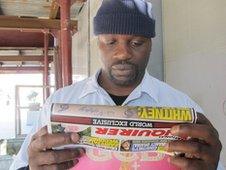 "I don't think they should have done that.

"That's why they held it in the private, because they figured someone from the public might do that.

"That's not right for the world to see that .

"It's on the front page, it's going to make everyone buy it (National Enquirer).

"I think it's very disrespectful."

"They shouldn't have put her picture in a magazine.